All New Mexico schools move to in-person learning this week 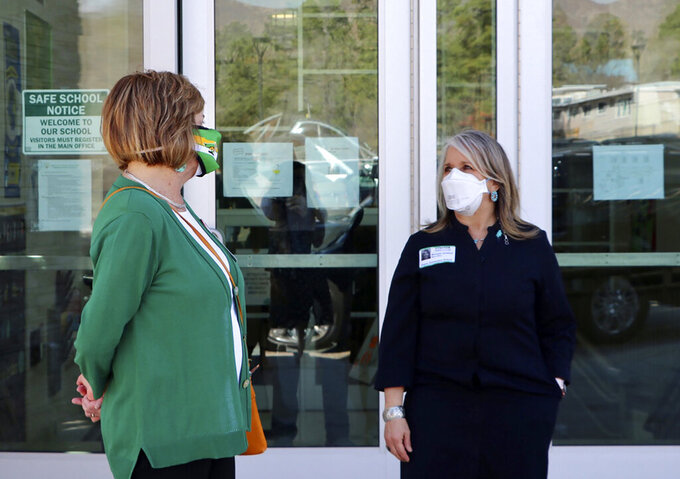 SANTA FE, N.M. (AP) — All New Mexico public school districts are expected to be open for in-person learning this week, with the largest district welcoming students back Monday with some hiccups due to a shortage of bus drivers.

Medium-sized districts in Santa Fe, Las Cruces, Las Vegas, and other cities will offer full-time in-person learning starting Tuesday, with some grade levels in some districts staggered later in the week.

The state’s push to reopen gives the vast majority of parents the option of sending their children back to school after more than a year of struggling with child care, unmet special needs, at-home internet, and more report cards marked with Fs.

Districts are warning students that school won’t be the same as before the pandemic.

They’ve been told to bring their laptops back and forth each day in case an outbreak shuts down their school again. With fountains shut off, they should bring water bottles. Hugs are banned and masks are required.

Parents who don’t feel safe sending students back are allowed to keep them in remote classes this semester. At Las Vegas City Schools in northern New Mexico, around 60-70% of students will stay in remote learning. In Santa Fe, around 50% will attend in person.

In the state’s largest district, Albuquerque, some parents may be unable to send their children to school in person because transportation hasn't been secured for a few of the bus routes, including some elementary schools.

“APS doesn’t have enough bus drivers to resume all routes, so it’s prioritizing transportation for students and areas with the highest needs. Walking groups and carpools are encouraged as safe options, and students can ride city buses for free,” the district warned in social media posts last week.

All but three buses ran Monday morning, said APS spokeswoman Monica Armenta, despite a rash of contractors quitting or calling in sick over the weekend.

Gov. Michelle Lujan Grisham shuttered schools in March 2020 as the coronavirus swept across the U.S. Schools were slated to partially reopen in the fall, but few schools did as COVID-19 cases peaked, and the state adopted one of the strictest lockdowns in the nation.

Albuquerque Public Schools Superintendent Scott Elder had warned in January that it would take around 30 days to restart bus driver contracts dormant during the pandemic. Elder's school board further delayed the task of rehiring drivers when it voted down proposals for hybrid in-person learning in February.

On March 8, state education officials announced that schools would need to reopen during the first week of April. State health officials pushed hard to vaccinate the vast majority of teachers last month.

Micro-districts accounting for around 1% of the student population have been open for full-time, in-person learning throughout the state since September, under an exception to the health order for districts with less than 100 students.