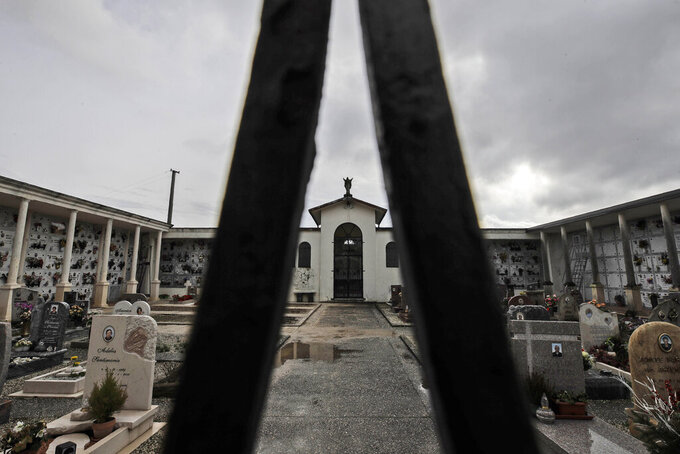 A view of the Vo Vecchio cemetery, in Vo Euganeo, Italy, Wednesday, Feb. 10, 2021. Shockwaves ran through the wine-making village of Vo, west of Venice, as word spread last Feb. 21 that a retired roofer had died of the new coronavirus becoming the first known COVID-19 victim in the West. (AP Photo/Luca Bruno)

VO, Italy (AP) — Italy delivered the first shocking confirmation of locally transmitted coronavirus infections outside of Asia a year ago Sunday, with back-to-back revelations of cases more than 150 kilometers (nearly 100 miles) apart in the country's north.

First, a 38-year-old man in Codogno, an industrial town in the Lombardy region, tested positive for COVID-19, sending panicked residents to pick up their children from school, stock up on provisions at grocery stores and search in vain for surgical masks at pharmacies.

By the evening of Feb. 21, a 77-year-old retired roofer from Vo, a wine-making town in the Veneto region, had died — at the time, the first known fatality from a locally transmitted case of the virus in the West, setting off alarm bells far and wide.

In the days and weeks that followed, densely populated Lombardy would become the epicenter of Italy’s outbreak and, by the end of March, countries the world over would be under lockdowns to slow the spread of the virus that has now taken 2.4 million lives. But Vo, as one of the first towns in the West to be isolated, has a unique story, providing some of the first scientific insights into the deadly virus.

Adriano Trevisan’s death sent shockwaves through the town west of Venice. Trevisan, well-known around Vo and a regular at a card game in a local bar, had been hospitalized for two weeks with circulatory issues related to a heart condition that could not be resolved with drugs, according to his physician, Dr. Carlo Petruzzi. There was no reason to suspect the coronavirus — as the retiree had had no contact with China, until then a key element in diagnosis.

After being advised of the death, Mayor Giuliano Martini, who doubles as the town’s chief pharmacist, ordered schools and nonessential businesses to close and forbade residents from leaving the town, even for work. He asked local volunteer groups to help ensure food and pharmaceutical supplies entering the town were ferried to shelves. The town's three family doctors were put into quarantine because of suspected contact, and the closest hospital, a 30-minute drive away, was closed.

“It was like a war film,” Martini said. “We were completely alone.”

Surrounded by vineyards and farmland, the town of 3,270 people nestled against Monte Venda has long enjoyed bucolic isolation. But by three days after Trevisan’s death, its isolation was ensured by government decree: Rome dispatched soldiers to seal the town's 12 access roads. Blockades were also set up around the 10 towns near Milan where the other early case of local transmission was confirmed.

“There was a sense of bewilderment, I would call it,’’ said Dr. Luca Rossetto, one of the practitioners in Vo. “Even myself, with an old specialization in preventative hygiene, should have the right mindset. But there was an absolute disorientation.”

Rossetto reviewed his recent cases and realized he had seen seven people in the previous days with pneumonia-like symptoms. A week later, the 69-year-old physician himself was hospitalized with the virus, a light case from which he recovered.

Veneto Gov. Luca Zaia, meanwhile, instinctively ordered blanket testing for all of the residents of Vo, with the aim of understanding the outbreak’s origin. That he was even able to make such a call is thanks to the foresight of University of Padua virologist Andrea Crisanti, who had ordered the necessary tools after the virus appeared in China. Many places around the world struggled to institute testing so quickly.

Crisanti recognized that there would be value in testing the entire town immediately after the contagion was confirmed and then again after two weeks. And his work offered early insight into how the virus spread — clarity that Crisanti said was never properly translated into action.

The results of the first round of nasal swab tests, available on Feb. 27, showed that nearly 3% of the population had been infected. That indicated that the virus had been circulating in the town since the end of January, according to Crisanti.

“With that data, we should have closed both Veneto and Lombardy, immediately,” Crisanti said. But decision-makers, he said, “didn’t perceive the extent of the problem.”

The question of whether more more restrictions on movement should have been instituted sooner has been hotly debated in Italy, with many politicians noting that such decisions were extremely difficult given that the measures come with a heavy economic and social cost and infringe on freedoms. There is even a criminal investigation into whether officials waited too long to lock down two towns in Lombardy.

Shutting down Vo proved remarkably effective in stopping the transmission. When Crisanti conducted the second round of testing on March 7, no new cases were detected.

Crisanti said that the findings — which were published by the journal Nature in June but known to Italian officials immediately — made clear that isolation and mass testing were the best way to contain the virus before vaccines.

While Crisanti succeeded in persuading the Veneto region to increase testing, it wasn’t until March 9 — 17 days after the virus had been simultaneously detected in two Italian regions, with cases multiplying and a mass exodus toward the south under way — that then-Premier Giuseppe Conte ordered the entire country on a near-total lockdown that would last seven weeks.

Scientists still don’t know how the virus arrived in Vo.

Though struck at the same time, Veneto fared much better than Lombardy, which became the epicenter of both of Italy's surges. It has half the population and its industry is more spread out, but experts have also credited its health system, which enables close contact among family doctors, district administrators and hospital officials and which is less reliant on private facilities. Another key element in its virus fight was the testing system created by Crisanti.

Crisanti urged the government in Rome in August to expand its capacity for nasal swab tests in the hopes of keeping transmission low after a successful lockdown. While the government has, Crisanti is disappointed that it has relied heavily on rapid tests — as many other places have and as some experts have recommended — rather than strategically deploying more reliable nasal swabs to isolate outbreaks.

By October, Italy was battling a resurgence that has proved even deadlier than the spring peak, with the toll now at nearly 95,000. New clusters of a variant first found in Britain have led to localized lockdowns around the country, forcing the cancellation of one of the virus anniversary commemorations this weekend in Lombardy.

Vo, too, suffered a resurgence that is only now abating. The town’s pandemic death toll doubled, to 6.

Boasting an unusually high number of restaurants per capita at 45 eateries, Vo is now an echo of its former self. The weddings, baptisms and first communions that drew dwellers of nearby cities to the hillside town have been limited by restrictions. Restaurant closures also forced the Vo wine cooperative to reduce 2020 production. The local dance hall has never reopened.

“The virus in Vo arrived in Vo and died in Vo,” the mayor said of the first cases a year ago. The failure to repeat the model: “Ruinous,” he said.