In Alpine skiing, bad timing for an injury means no Olympics 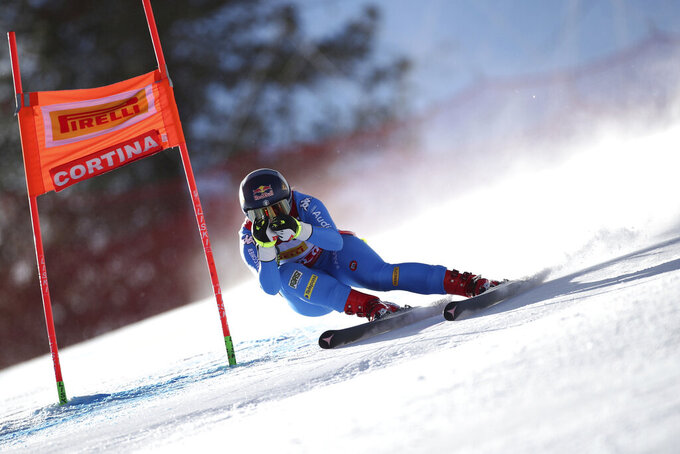 FILE - Italy's Sofia Goggia speeds down the course during an alpine ski, women's World Cup downhill, in Cortina d'Ampezzo, Italy, Jan. 22, 2022. Goggia, the reigning gold medalist in the women’s downhill, is hoping to compete in Beijing, even though she sprained her left knee and fractured a bone in her leg during a race in January. (AP Photo/Gabriele Facciotti, File)

Breezy Johnson knew she was having the best ski racing season of her career as the Beijing Olympics neared.

The 26-year-old from Wyoming, never better than third in any World Cup race, put together three consecutive runner-up finishes in downhills in December, performing as if past knee problems never happened.

“I was genuinely so happy. I can’t remember a period of my life where I was this happy and feeling good,” Johnson said in a recent telephone interview with The Associated Press. “I felt as confident as anyone can feel about winning a medal at this Olympics.”

And then, just like that, everything changed. Johnson, seventh in the Pyeongchang downhill in 2018, tore her right knee after a pair of training crashes in January, requiring surgery. Now instead of being a medal favorite, she is back in the U.S. as Friday’s opening ceremony signals the start of the Beijing Games in China.

It’s not uncommon for those who compete in Alpine skiing to get left behind and miss an Olympics because of injury. They tend to accept that as a by-product of what they do: throw their bodies down the precipitous side of an icy mountain as fast as they can, over and over and over again.

“I’m just trying to move on and deal with it. It’s tough, but it’s just something that happens. And, I mean, hopefully, it doesn’t happen again in four years,” Johnson said. “Luckily, ski racers have long careers, and we get multiple Olympic cycles. So just keep moving and see what the future holds.”

Returning can take several months, even a year or more, meaning it very much matters where, exactly, on the four-year Olympic calendar someone gets hurt.

There are instances of a quicker-than-expected turnaround, to be sure, such as that of Kjetil Jansrud, a five-time Olympic medalist for Norway who declared his season over after damaging his knee in a crash during a World Cup super-G at Beaver Creek, Colorado, in December. But made it to Beijing.

Italy’s Sofia Goggia, the reigning gold medalist in the women’s downhill, is hoping to get there, too, even though she sprained her left knee and fractured a bone in her leg during a race in January.

Johnson tore her right ACL in September 2018, sidelining her for the following World Cup season, then tore two ligaments in her left knee in June 2019. Still, those setbacks weren’t going to keep her from getting back on the slopes in time for the trip to the 2022 Games.

This latest setback did, however.

“Everybody accepts the risks. It’s a dangerous sport, but that’s what makes it an exciting sport. And that’s why these guys do it, at the same time, right?” said John Kucera, the 2009 downhill world champion who is an Alpine coach for Canada. “The timing of injuries is something you can’t control, unfortunately.”

Kucera was looking forward to the 2010 Vancouver Olympics when he broke his left leg in a World Cup race three months before the opening ceremony.

Every Games, it seems, prominent Alpine racers sit out for a reason that has nothing to do with talent or speed. Some recent examples: In 2010, Kucera was joined by Switzerland’s Lara Gut-Behrami (hip) and Liechtenstein’s Tina Weirather (knee). In 2014, American Lindsey Vonn (knee). In 2018, American Julia Mancuso (hip) and Canada’s Erik Guay (back). In 2022, France's Adrien Theaux, a super-G bronze medalist at the 2015 world championships, won't be at what would have been his fourth Olympics at the age of 37 after breaking his left elbow and his right leg and ankle in November.

“You really don’t know how much runway you have,” Kucera said. “You might stay healthy and be able to do this ’til you’re into your early 40s. And you might be done the next day. For me, I was done at 25.”

For Johnson, it was hard to see her friends on the U.S. Olympic team post on social media about traveling to China and receiving their uniforms. She, too, gets the gear, which is bittersweet.

Johnson plans to watch the Feb. 15 women’s downhill in Beijing. Probably will scream at the TV, too.

Eventually, her mind will turn to 2026 and the next Winter Olympics. The site? Cortina d’Ampezzo, Italy, where her season ended with a fall last month.

“If it happens, it’ll be a crazy moment. Coming full circle and (thinking), ‘This is where it ended,’” Johnson said. “For now, I’m just focusing on working, because I want to get back to that happy place. That’s not going to be an easy road to get back there. But it exists, and I know how good of a skier I am."