Alvarez, Mighty Mouse back on US TV with One Championship 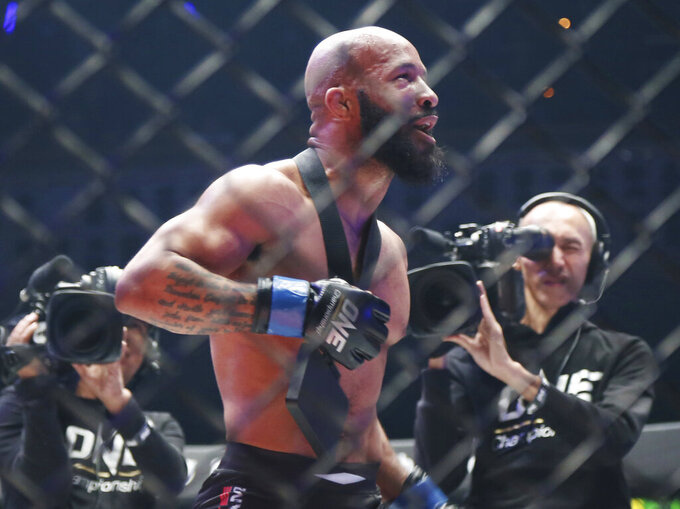 FILE - Mixed Martial Arts fighter Demetrious Johnson celebrates after defeating Japan's Yuya Wakamatsu in a flyweight world grand prix quarterfinal One Championship bout in Tokyo, in this Sunday, March 31, 2019, file photo. Demetrious Johnson and Eddie Alvarez won UFC championships before leaving their native U.S. to pursue another title overseas. Their home fans will get to see their next fights in Singapore thanks to One Championship's new series of fight cards on TNT. (AP Photo/Koji Sasahara, File)

Sure, they both missed competition when they couldn't get it in 2020. But these former UFC champions both believe they're emerging from the coronavirus pandemic as better fathers and smarter fighters.

“I got a chance to see who I am outside of fighting,” said Alvarez, the 37-year-old former UFC and Bellator lightweight champ. “I got to hang out with my family and truly be there with my family, because I didn’t have to worry about a promoter calling me or something. It was some well-needed time, and I enjoyed it.

That time arrives Thursday morning when Johnson and Alvarez headline One Championship's latest show from Singapore. Johnson takes on Adriano Moraes for the One flyweight title, while Alvarez meets Iuri Lapicus.

The Asia-centered One promotion is staging cards for U.S. broadcasts on TNT for the next four consecutive Wednesday nights, which means the fights are breakfast shows at Singapore Indoor Stadium.

Although the UFC and Bellator dominate the North American MMA market, One is hoping to continue carving out a slice with these TNT shows, which are scheduled to follow a popular professional wrestling series each week.

“Fans don’t really know what they’re going to see on TNT, but this promotion is going to deliver,” Alvarez said. “I think almost immediately, American fans are going to understand that there’s a new promotion in town.”

Johnson and Alvarez moved to One Championship in late 2018 partially for the opportunity to test their skills against the rest of the world after their lengthy, successful runs back home. One's determination to establish itself as a television presence — and eventually a live sports entity — in North America is only a bonus for two fighters with devoted American followings.

“My fans being able to watch me fight live is awesome,” Johnson said. “It also keeps me on my same time zone where I don’t have to acclimate to Japan’s time zone or Singapore’s time zone. One Championship is a cool organization, but this is great for me personally.”

Indeed, the timing of the shows allowed Johnson and Alvarez to keep their body clocks on North American time. That's a possible advantage when Johnson faces Moraes (18-3) for the belt in the main event.

Johnson is almost certainly the greatest smaller-weight fighter in MMA history. The flyweight limit is 125 pounds in the UFC and most promotions, but the One Championship standard allows fighters to compete between 125 and 135 pounds in an attempt to prevent extreme weight-cutting.

Johnson embraces his ability to fight closer to his walking-around weight with One, and he scales his workouts accordingly. He carries more muscle, and he trains smarter instead of harder.

“Less is more, and it’s a hard struggle for me, because I’m a person that wants to go hard all the time,” Johnson said.

It all adds up to perhaps the best form of his career. But the downside to essentially fighting at 135 pounds is tangling with larger men — such as the 5-foot-8 Moraes.

The 5-foot-3 champion known to all as Mighty Mouse is hardly intimidated.

“You have to go and deal with everybody being bigger, but that's the only downside,” Johnson said. “I’ve always been fighting guys who wanted to make a name for themselves, but even then, it works sometimes, and other times it doesn’t work. I didn’t build my name off one athlete. I built my name off a long span, a period of domination that made me who I am today. That’s the mindset you have to have.”

Alvarez and Johnson both fought in Japan and the Philippines for One before the coronavirus pandemic while keeping their families and training camps in the U.S. during their pursuit of another title overseas.

That journey would end for Johnson with a victory Thursday, while Alvarez is likely to be in line for his own title shot if he beats Lapicus.

In another challenge of fighting far from home, Alvarez had trouble finding any video footage of Lapicus to study.

“But I've been there before,” Alvarez said. “When I started wrestling at 14 years old, you go to tournaments and sometimes you wrestle five times a day, and you don’t know who you’re wrestling until you step on the mat. I’ve done it, and the journey has more to do with me and my mindset than it has to do with opponents. That's what's so magical about my time in this sport.”