Amazon city shuts down amid attacks over trafficker's death 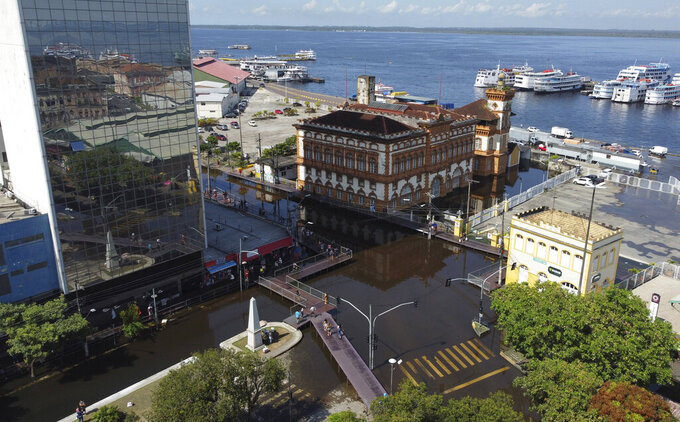 Aerial view of streets flooded by the Negro River, in downtown Manaus, Amazonas state, Brazil, Tuesday, June 1, 2021. Rivers around Brazil's biggest city in the Amazon rain forest have swelled to levels unseen in over a century of record-keeping, according to data published Tuesday by Manaus' port authorities. (AP Photos/Nelson Antoine)

RIO DE JANEIRO (AP) — The Brazilian Amazon’s biggest city ordered schools closed and suspended public transportation Monday amid a wave of vandalism and violence that has followed the death of an alleged leader of a drug trafficking ring in a shootout with police.

Dozens of buses, public buildings, banks and personal vehicles in Manaus were targeted by a drug trafficking organization as retribution for the killing, the Amazonas state's government said. Twenty-one vehicles were burned, and Gov. Wilson Lima on Sunday requested deployment of the national guard.

The violence also hampered the vaccination campaign against the coronavirus. Officials in Manaus, where a more contagious variant of the virus emerged in 2020, closed its vaccine sites for fear of attacks. They expressed hope that shots could resume Tuesday.

At noon, the bus service was gradually restored, but officials said it would halt again at nightfall.

Amazonas state’s security secretary, Louismar Bonates, said the attacks were ordered from prison in response to the death of alleged trafficker Erick Batista Costa, known as “Dadinho.” He was killed by the police during a confrontation Saturday night during an operation in the Redençao neighborhood, west of Manaus, local authorities said.

In broad daylight on Sunday, assailants threw gasoline bombs at bus stations and banks and also burned tires, according to images shown on television. Fearing attacks, shopkeepers shut their stores.

Aboard speedboats, criminals shot at the entrance of a police station near the port of Manaus, the newspaper O Globo reported. It said one attacker disembarked and threw a grenade, but it didn’t detonate.

There weren't any reports of injuries.

So far, 29 people suspected of carrying out the attacks have been arrested, the Amazonas state's security secretariat said. Of them, 27 directly participated in the violence and the other two were involved in planning the attacks, the secretariat said.

Manaus residents interviewed by O Globo said they felt like hostages inside their homes, afraid to go out due to threats circulating on social media that supposedly were from the crime gang responsible for the attacks.

“We have greatly reinforced patrols,” Bonates, the security secretary, said. He added that police had set up checkpoints across Manaus and the state, saying: “People can come out of their homes and move about freely. The police are in the streets to guarantee safety.”

Attacks were centered in Manaus, but also happened in the municipalities of Parintins and Careiro Castanho.