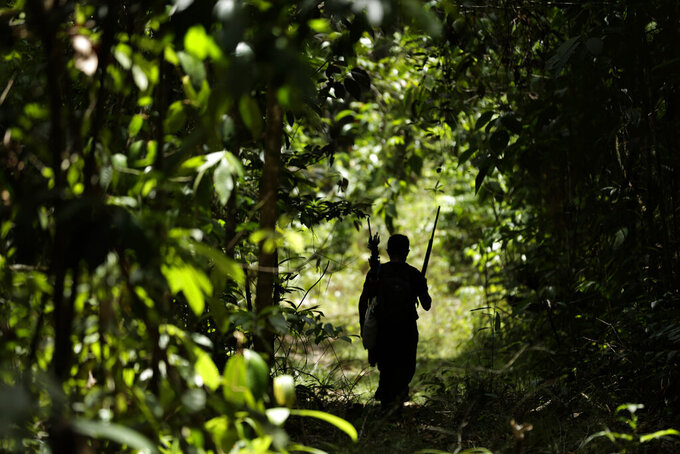 Tenetehara Indigenous man Regis Tufo Moreira Tembe patrols with the Ka’Azar, or Forest Owners, on the Alto Rio Guama reserve in Para state, near the city of Paragominas, Brazil, Tuesday, Sept. 8, 2020. Three Tenetehara Indigenous villages patrol to guard against illegal logging, gold mining, ranching, and farming on their lands, as increasing encroachment and lax government enforcement during COVID-19 have forced the tribe to take matters into their own hands. (AP Photo/Eraldo Peres)

ALTO RIO GUAMA INDIGENOUS TERRITORY, Brazil (AP) — A bit after sunrise, dozens of Indigenous Tembé men began preparing for the important day ahead. They danced, chanted and donned matching black T-shirts before setting off on motorbikes into Brazil's Amazon forest.

Self-declared “forest guardians," their aim was to find and expel illegal loggers and miners within their territory on the eastern edge of Brazil’s Para state. Emblazoned on their T-shirts was their group’s name — Ka’Azar, which in their language means “Owners of the Forest."

“For a long time, since I was born, I heard my father and the elders talk about the need to fight the loggers in our lands,” said Ronaldo Tembé, a 21-year-old member of the 40-man patrol. “We are trying to combat deforestation within our reserve, which is becoming increasingly precarious.”

The Tembé began these patrols last year as increasing encroachment on their territory and lax enforcement during President Jair Bolsonaro’s administration prompted them to take matters into their own hands. Put on hold during the pandemic, the patrols resumed last week.

“We created the guardians, so these young men can inspect the land, to show where the invasions and illegal loggers are,” said village leader Sérgio Tembé, adding that Bolsonaro’s staunch support for Amazon development has emboldened the illegal activity.

Accompanied by an Associated Press photographer, the men rode for four hours before they heard barking dogs in the distance. Leaving their motorbikes, they walked along a trail until they found a wiry man in shorts and sandals near a huge felled tree.

Altemir Freitas Mota, 52, claimed the destruction wasn’t his doing, and that he was merely gathering vines to make brooms and chairs. But he conceded that he had seen the loggers and, surrounded by the Tembé men brandishing rifles and machetes, agreed to guide them to their camp.

Deforestation in Brazil’s Amazon region may have reached a 14-year high in the 12 months through July, according to preliminary data published last month by the country’s space agency. It calculated the Brazilian Amazon lost 9,216 square kilometers (3,558 square miles) of vegetation in that period.

Bolsonaro has repeatedly said he believes it is folly for relatively small Indigenous populations to control vast swaths of rain forest. The Tembé people's Alto Rio Guama territory spans some 2,800 square kilometers (1,080 square miles), nearly the size of Rhode Island, and has about 1,700 residents, according to the advocacy group Socio-Environmental Institute. The Tembé are the western branch of the Tenetehara Indigenous group.

“No one is against giving due protection and land to our Indian brothers, but in the way it was done, and today it reflects 14% of national territory demarcated as Indigenous land, it is rather abusive,” Bolsonaro said earlier this year.

He has also blasted Brazil's environmental regulator, IBAMA, for seizing lawbreakers’ logging equipment or setting it afire, which is permitted under law. His administration’s recently submitted 2021 budget proposal for IBAMA’s environmental control and monitoring is down 25% from 2018, the final year of the prior administration.

Sérgio Tembé, the village leader, told the AP that Bolsonaro’s stance has motivated criminals in the region to exploit their lands. Then he offered a plea to Bolsonaro.

“Our land is invaded, President, because you gave incentives for the loggers, the land grabbers to invade,” he said. “So stop it, President. You need to have respect for us.”

Initially, the Tembé destroyed the trespassers’ tractors and other heavy equipment too, but doing so brought death threats and attempted ambushes. Last September, public prosecutors issued an official request for the Federal Police to conduct an urgent operation to protect the Tembé from loggers’ attacks. They also recommended that the Tembé patrols limit their activities to monitoring and recording invasions, then alerting prosecutors, who can work to force action from federal authorities.

But even patrolling can be dangerous for the Tembé in a place where public oversight is scant, and where killing is an all-too-common recourse for lawbreakers. Several of the Guajajara Indigenous people, whose forest guardians defend their own land in neighboring Maranhao state, have been killed in the past year.

Mota, the man who said he'd seen the loggers and knew where their camp was, told the Tembé patrol that those at the camp were unarmed. Still, the Tembé kept their rifles at the ready as they walked an hour through the forest. They paused to discuss strategy as they drew near, and some painted their faces red with oil from the seeds of achiote pods.

They came upon a clearing where two large tarps were propped up with branches over a makeshift kitchen and sleeping area. There they found six loggers, a female cook and her son. Mota took a seat beside them.

The Tembé men explained to the loggers how felling trees harms both the environment and their people, while using their cellphones to record the exchange. Then they demanded the loggers leave their territory.

“We just ask you to leave from what is ours, and we stay in peace, no trouble with no one,” one of the Tembé men told the logging camp's leader, Zeca Pilão, who stood shirtless with his arms crossed.

The Tembé will return and give one further warning, said Sérgio Tembé. If the loggers fail to comply, they will burn the loggers' equipment and camp, and hold the government responsible, he added.