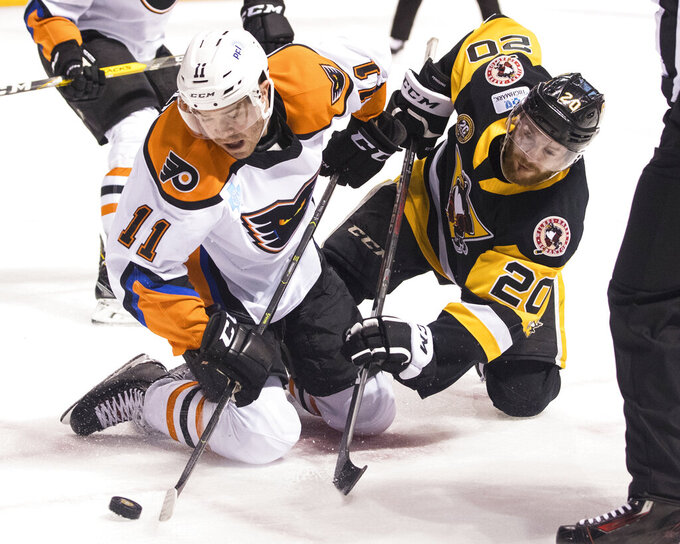 FILE - In this March 16, 2019, file photo, Lehigh Valley Phantoms' Steven Swavely (11) moves the puck past the Wilkes-Barre/Scranton Penguins' Jarrett Burton after a faceoff during an AHL hockey game at Mohegan Sun Arena in Wilkes-Barre, Pa. The American Hockey League has canceled the rest of its season because of the coronavirus pandemic. President and CEO David Andrews announced the league ‘has determined that the resumption and completion of the 2019-20 season is not feasible in light of current conditions.’ The AHL's Board of Governors made that determination in a conference call Friday, May 8, 2020. (Christopher Dolan/The Citizens' Voice via AP, File) 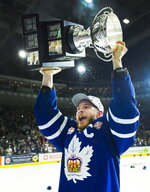 The American Hockey League canceled the rest of its season Monday because of the coronavirus pandemic, shifting its focus toward an uncertain future.

While the Calder Cup will not be handed out for the first time since 1936, the 31-team AHL hopes to return next season. That remains uncertain; one possibility is that no fans would be allowed in arenas.

Incoming president and CEO Scott Howson, who will take over for David Andrews this summer, said the AHL is still planning for a full 2020-21 regular season running from Oct. 9-April 18. But it also is working on schedules that start in November, December or January.

“Obviously (we'll) talk about no fans in the building: Are teams prepared to do that?" Howson said. “It’s just in the infancy stages now, and we’ve got a lot of information to gather. But we are going to have models that sort of have truncated season as we move along. ... We’re just going to keep planning and make sure we’re flexible and nimble and ready to turn to a different scenario if we have to.”

Andrews, who has been at the helm of the Springfield, Massachusetts-based AHL for 26 years, announced that the league had “determined that the resumption and completion of the 2019-20 season is not feasible in light of current conditions." The AHL’s Board of Governors made that determination in a conference call Friday.

“It’s something that was essentially inevitable,” said Syracuse defenseman Cameron Gaunce, who is an AHL executive committee member for the Professional Hockey Players Association. “I think they had been waiting for this point because they wanted to see if there had been any changes, and I think that was the responsible way to go about it. They didn’t want to make any knee-jerk reactions either way.”

The 84th season for the NHL’s top minor league was suspended March 12 with 209 games remaining. That was the same day the NHL stopped play, though it still hopes to resume and could include many AHL players as part of expanded rosters.

“We are very grateful to the National Hockey League and its teams for their support and leadership in navigating through the challenges faced over the past two months,” Andrews said. “The AHL continues to place paramount importance on the health and safety of our players, officials, staff and fans and all of their families, and we all look forward to returning to our arenas in 2020-21.”

PHPA executive director Larry Landon recently said he's concerned about the ability of the AHL and ECHL — which canceled the rest of its season in March — returning if it's not safe for fans.

“You don’t know what’s going to happen, whether there’s going to be an AHL season next year,” said Gaunce, whose NHL/AHL contract with Tampa Bay is set to expire after this season. “If ticket revenues aren’t part of the revenue stream for a lot of these teams, that’s going to affect a lot of their bottom lines. And if that’s the case, how many expenses are they really going to be willing to take on? So it’s something that’s up in the air.”