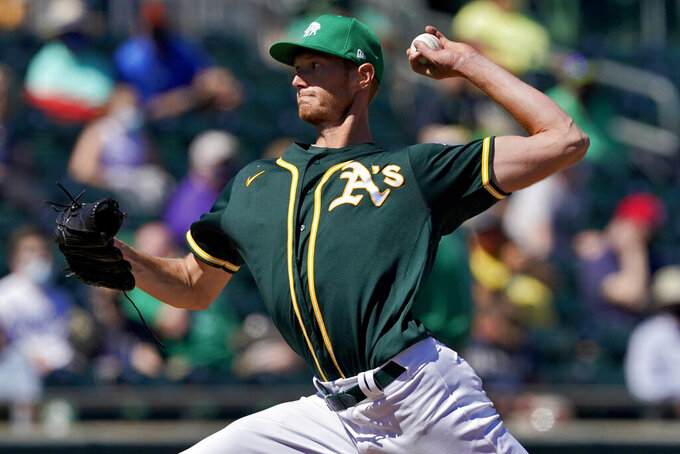 Outlook: After winning their first division title in seven years, the A’s took some serious hits this offseason with Semien leaving to sign a one-year deal in Toronto after not getting a qualifying offer from Oakland, and star closer Hendriks signing with the White Sox. The A’s acquired Andrus to replace Semien at shortstop but the 32-year-old batted just .194 in limited time last season. Rosenthal was signed to take over as closer as part of what should be a very strong bullpen. There are still plenty of key pieces sticking around in Oakland, led by Chapman and Olson at the corner infield spots, along with a young rotation anchored by Montas, Manaea and Luzardo. Puk is coming off shoulder surgery but also could contribute. The A’s will be able to have fans at the Coliseum, with state rules allowing 20% capacity to start the season with a chance for that number to rise if coronavirus cases in the area drop.

Outlook: The Astros seek their fourth AL West title in five seasons after keeping last year’s team that came a win shy of the World Series largely intact. They relied on a bevy of talented young pitchers to carry them in a season when ace Justin Verlander made just one start. One of those starters, Framber Valdez, broke a finger on his pitching hand in spring training and could miss significant time. That leaves McCullers, Urquidy and Javier needing to take another step forward this season with Verlander out all year after undergoing Tommy John surgery. The rotation got a late boost when Houston added Odorizzi. The 2019 All-Star gives the Astros a veteran to pair with the 37-year-old Greinke and provide stability as some of the young arms develop. They’ll have a huge hole in the lineup after leadoff hitter and center fielder Springer signed a $150 million, six-year contract with the Blue Jays after spending his first seven major league seasons in Houston. The Astros brought back veteran outfielder Brantley, who signed a two-year deal to stay with the team, and their offense should get a boost with the return of Alvarez. The 2019 AL Rookie of the Year is healthy after missing all but two games last season after being diagnosed with COVID-19 before having knee surgery. His return should help make up for the loss of Springer in a lineup that also features Bregman, Altuve and Correa, who powered the offense in the playoffs with six homers and 17 RBIs. The Astros announced in January that they would allow about 10,000 fans per game at Minute Maid Park early this season. But they could increase that number before opening day in the wake of the Texas Rangers’ decision to allow 100% capacity at their ballpark after Gov. Greg Abbott lifted coronavirus restrictions in the state.

Outlook: The Mariners believe they are on the cusp of contention and this season will be the litmus test of whether that’s accurate, or if their rebuild still has more stages to come. Lewis is the first Rookie of the Year for Seattle since Ichiro Suzuki in 2001 and combined with Gold Glove winners Crawford and White gives the Mariners a solid defensive foundation. The starting rotation has potential if Paxton can rediscover his past form and if the Mariners have unearthed a gem in Flexen. Bullpen has been remade, and along with depth of the batting order, will be key in just how competitive Seattle is in 2021. There is still the pending arrivals of prospects Jarred Kelenic, Logan Gilbert, Cal Raleigh and Julio Rodriguez on the horizon that Seattle believes could push its rebuild into being contenders. When and if they arrive in 2021 could be the difference in Seattle ending the longest playoff drought in baseball or if there will be at least one more year of waiting. The Mariners will open the season with a capacity of 9,000 fans at T-Mobile Park.

Outlook: The big-budget Angels believe they’ve got the talent and stability to end their streaks of five straight losing seasons — the franchise’s longest skid since the 1970s — and six consecutive non-playoff campaigns. Limited groups of fans at Angel Stadium next month should provide a big boost for a team that will welcome the help. With much of the AL West rebuilding or rebooting, the timing could be right for Los Angeles to get Trout’s first playoff victory. Coming off an unimpressive year by his peerless standards, Trout is back with Rendon for their first full season together. Starting pitching has been the Angels’ biggest problem for years, and new GM Minasian addressed it only by acquiring Quintana and Cobb instead of bigger-name targets. Minasian is also overhauling the Halos’ awful bullpen, starting with new closer Raisel Iglesias. While they’re talented enough to win now, this also is a transition year for the Angels, with only four players under contract past 2021 — including Ohtani, who will be a two-way player again after a rough 2020. Ohtani is hitting the cover off the ball in spring training, and the early results from his return to the mound are promising. This is also a probable farewell season for the 41-year-old Pujols, the oldest player in the majors as he hits the final summer of his 10-year contract with a fraction of his prime production.

Outlook: The Rangers are in a rebuilding mode that began last season when they finished an AL-worst 22-38 and traded away workhorse starters Lynn and Mike Minor. There is uncertainty in a rotation that might utilize seven pitchers for five starting spots, two filled by two-pitcher tandems. Leclerc, still unestablished as a closer, is coming back from a shoulder injury and Jonathan Hernandez, maybe the team's best reliever, is shut down from throwing until at least early April because of a ligament sprain in his right elbow. Several veterans in the lineup are coming off horrendous offensive seasons, including OFs Gallo (who did win a Gold Glove in right field) and Dahl, who wasn’t even offered a new contract by Colorado over the winter after being an NL All-Star in 2019. There has been an infield shuffle, with Kiner-Falefa set to be the first opening day shortstop in 13 seasons other than Andrus. The young Hawaiian shifted over after winning a Gold Glove at third base last season. Long-struggling Odor is still in the lineup, at third base instead of second, where Solak is getting his shot to be an everyday player. With Texas now allowing businesses in the state to operate at 100% capacity, the Rangers are preparing for a potential full house of 40,518 fans for their home opener at Globe Life Field on April 5 against Toronto. They could be the first team in any major U.S.-based sports league with a full-capacity crowd since the coronavirus pandemic started altering the sports landscape more than a year ago.