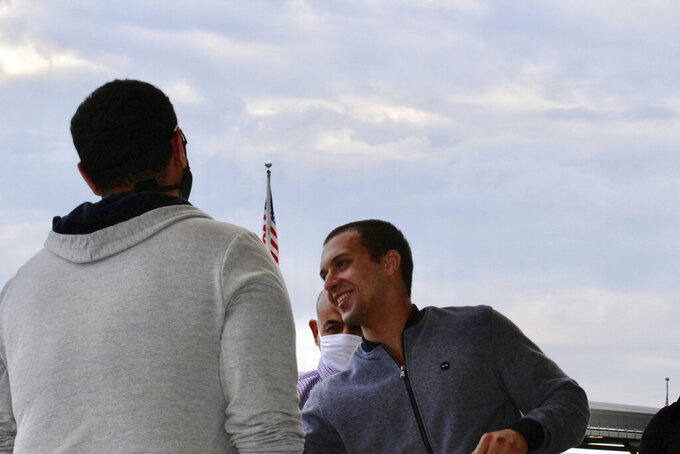 In this image provided by the Freedom Initiative Mohamed Amashah is greeted by family members upon arrival at Dulles International Airport in Dulles, Va., on Monday, July 6, 2020. The American medical student detained without trial in an Egyptian prison for nearly 500 days has been freed and returned to the United States, the U.S. State Department said on Monday. (Bushra Soltan/Freedom Initiative via AP)

CAIRO (AP) — An American medical student detained without trial in an Egyptian prison for nearly 500 days has been freed and returned to the United States, the U.S. State Department said on Monday.

The release of Mohamed Amashah, a dual Egyptian-American citizen from Jersey City, New Jersey, followed months of pressure from the Trump administration, according to the Freedom Initiative group, which advocated on his behalf.

“We welcome the release of U.S. citizen Mohamed Amashah from Egyptian custody, and thank Egypt for its cooperation in his repatriation,” the State Department said.

Like thousands of political prisoners in Egypt, Amashah, 24, had been held in pre-trial detention on charges of “misusing social media” and “aiding a terrorist group,” according to the Freedom Initiative. Under broad counterterrorism laws, state prosecutors have used these vague charges to renew 15-day pretrial detention periods for months or years, often with little evidence.

In March of last year, Amashah stood alone in Cairo’s Tahrir Square, the epicenter of Egypt’s 2011 Arab Spring uprising, holding an Arabic sign that read: “Freedom for all the political prisoners.”

He was swiftly arrested and sent to Cairo's notorious Tora prison complex, where he remained for 16 months. Before boarding a flight home late Sunday, he relinquished his Egyptian citizenship as a condition of his release.

Protesting has been illegal under Egyptian law since 2013, when President Abdel Fattah el-Sissi, as defense minister, led the military’s ouster Mohamed Morsi, Egypt’s first democratically elected president, amid mass protests against his rule.

Over the years, el-Sissi has moved to quash dissent, silencing critics and jailing thousands.

In March, as the coronavirus spread in Egypt and raised the specter of unchecked contagion in the country’s crowded prisons, Amashah and fellow inmates began a hunger strike to protest their unjust imprisonment, the Freedom Initiative said.

Amashah suffers from asthma and an autoimmune disease, making him particularly vulnerable to the virus. His deteriorating health stoked fear in Washington that he could end up like Mustafa Kassem, an auto parts dealer from New York whose recent death after a hunger strike in the same prison sent a chill through Egyptian-U.S. relations.

“No one wanted to take the risk of another Kassem,” said Mohamed Soltan, founder of the Freedom Initiative.

A bipartisan group of U.S. senators asked that Secretary of State Mike Pompeo urge foreign governments to release Americans detainees, including Amashah, citing the risk posed by the pandemic.

“His case is welcomed progress and a step forward in the right direction,” the Freedom Initiative said in a statement.

This spring, the U.N. High Commissioner for Human Rights appealed for the release of pre-trial detainees in Egypt to save them from a possible viral outbreak.

Egypt’s prisons, estimated to hold 114,000 people, are “overcrowded, unsanitary and suffer from a lack of resources," the human rights office said, adding that detainees are routinely denied access to critical medical care and treatment.