America's bellwethers crumbled in aligning with Trump in '20 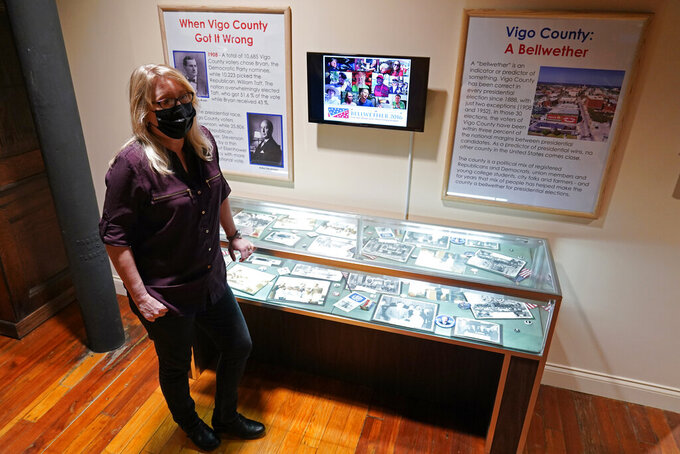 Susan Tingley, the executive director of the Vigo County Historical Museum, talks about the history of voting in Vigo County as she stands by a display in the museum, Wednesday, Nov. 11, 2020, in Terre Haute, Ind. Indiana's Vigo County had been America’s more reliable presidential bellwether, voting in line with the rest of the nation since 1956. But that winning streak ended this year, as it did for nearly all the country’s bellwethers, most of them blue-collar, overwhelmingly white communities in the Rust Belt. (AP Photo/Darron Cummings)

TERRE HAUTE, Ind. (AP) — A glass case in the history museum on the main street through this city celebrates its curious place in American lore: There’s a photo of John F. Kennedy Jr. on the courthouse steps, and Richard Nixon at Terre Haute's little airport. A newsreel playing on a loop describes it as “magic town.”

Vigo County, with about 107,000 people on the western edge of Indiana, long had some mysterious mix of quirky politics, demographics, geography, religion, labor and luck so that it had become America's most reliable presidential bellwether.

Since 1888, this exhibit boasts, the county voted in line with the nation in every presidential election but two. It missed in 1908 and 1952, then remained a perfect predictor of the U.S. mood, a rare place to toggle between Republicans and Democrats in harmony with America.

“That’s wrong now. We’re going to have to change that poster,” said Susan Tingley, the executive director of the museum, which is in an old overalls factory that closed long ago, like most of the local factories.

Vigo County’s most recent winning streak ended this year, as it did for nearly all the country’s reliable bellwethers, most of them blue-collar, overwhelmingly white communities in the Rust Belt. Of the 19 counties that had a perfect record between 1980 and 2016, all but one voted to reelect President Donald Trump, who lost to Joe Biden in both the national popular vote and in nearly every battleground state.

The country's tribalized politics seem to have finally reached these places that used to routinely swing from one party to the other. The only county that maintained its place as a bellwether is Clallam County, in Washington state.

The ones in the middle all crumbled, leaving many here wondering whether this was merely a Trump-fueled fluke or whether the country has cleaved itself so firmly into two opposing camps that these old political standard-bearers are obsolete. Is Vigo County just one more reliably red square in the red middle of America?

“It speaks to an evolution in American politics,” said David Niven, a political scientist at the University of Cincinnati who analyzed the state of Ohio's fall from bellwether status this year.

Niven notes these bellwethers were born when political battle lines tended to be drawn more cleanly along economic lines. These middle-class communities were in the center and up for grabs. But as national politics become less about economics and more about culture wars and identity, Democrats have lost their grip in places such as Vigo County that are overwhelmingly white, he said.

Now the places emerging as possible new bellwethers have more racially diverse populations. Delaware's Kent County last missed in 1992. Its population is 60% white and 27% Black. Blaine County in Montana, which last missed in 1988, is more than 50% Native American.

Vigo County doesn't look much like America, and its place as its foremost presidential predictor relied on a certain degree of luck, said Matt Bergbower, a political scientist at Indiana State University. It is not as diverse as the nation, with a population that is 85% white. It is not as wealthy or highly educated, either.

But for generations its conservative tilt on social issues was balanced by left-leaning idiosyncrasies. There are four colleges in Terre Haute, a remarkable number for a city its size. It is the birthplace of Eugene V. Debs, a champion for workers’ rights who ran for president as a socialist five times in the early 20th century. The county’s blue-collar workforce was heavily organized and union halls dotted the city.

Terre Haute was once so defined by its factories it even smelled of them. Big industrial plants lined the banks of the Wabash River, and the odor of fermentation and chemicals was in the air. People are happy that the smell is gone now. But it drifted away as the plants closed down, and with it went countless good-paying jobs.

Trump won in Terre Haute by 15 percentage points, holding his margin of victory in 2016. But local political observers on both sides of the aisle marveled at the dramatic spike in straight-ticket Republican ballots: 11,744, more than one-quarter of all the presidential votes cast. The county government, for the first time anyone can remember, will now be controlled almost entirely by Republicans.

“If you would have told me 10 years ago we would have more straight-ticket Republicans in this county than Democrats, I’d have said you’re a liar,” said Frank Rush, a Republican radio talk show host who voted for Trump.

Rush said Vigo County might be saying goodbye to its bellwether history, but it remains a barometer for the worries and values of the geographic middle of America. People in growing big cities just can’t understand life in a place like this, where it feels like the country is moving on without them.

“And Trump, love him or hate him, approve or disapprove, he at least gave the impression that he really cared about these folks that thought they were left behind and ignored,” Rush said. “That’s why they rallied to his side.”

Todd Thacker, business manager of the local International Brotherhood of Electrical Workers, said he’s willing to take part of the blame for the way this election turned out. He tried mightily to persuade his members to “vote your paycheck” and elect Democrats who support organized labor. But he watched as many instead aligned themselves based on polarizing wedge issues — “God, guns and gays,” he derides it.

Thacker is an avid hunter, he has a concealed carry permit and owns many guns. But the polarized political landscape today has, he said, “brainwashed people to think that if you’re a Democrat, you can’t be a patriotic gun-owning flag-waving American.”

Trump managed to stoke that fear and people listened, fueled by misinformation on social media and pundits bellowing all day about how the other side will destroy democracy.

His union supported a program called “Unity in the Community,” that as a response to the national reckoning on racism tried to bring together the police and the Black community. One of his members accused him of supporting a “Marxist” movement.

Thacker says typically about 35% of his members vote Republican. This year, he thinks it increased.

The Trump supporters in the union include Craig Rudisel, who spent 23 years in the military before joining the electricians’ local and has a Trump sign as big as a bathtub on his front lawn.

Rudisel is drawn to Trump's position on guns, abortion and taxes. He wears a Make America Great Again cap every day, and was unfazed to receive an anonymous typewritten letter in the mail from someone who described in vulgar terms how much they disapprove of his Trump sign. He likes that Trump upsets people, and he doesn't mind doing it, either.

“He wants to make America great again, and that’s what we want," he said. “We are tired of liberal progressive ideals. That’s not what our country was founded on and that’s not how this county should be going in the future. I want the country that I grew up in for my grandson and granddaughter.”

Rudisel is proud of Vigo County’s bellwether history. Like many here, he can off the top of his head rattle off the details of the few elections it missed and that is part of why he has clung to the hope that Trump hasn’t lost. Trump has claimed there was widespread voter fraud, despite offering no evidence to support that charge.

Rudisel thinks what happened here is proof. Vigo County and the rest of the bellwethers always get it right and opted for Trump, so he must be the rightful winner, Rudisel thinks.

Other Trump supporters also pointed to Vigo’s past performance as a sign that the election fight might not be over.

Ken Warner, a stockbroker, said he will accept a Biden presidency but he wonders how so many bellwethers could get it wrong, all at once.

Warner, 64, has toggled between Republicans and Democrats, and wasn’t terribly excited about Trump in the 2016 primary. Warner remains uneasy about the president’s personality. He cringed when Trump antagonized governors during the pandemic and hurled childish insults at people such as the late Sen. John McCain, R-Ariz.

But he grew more enthusiastic about Trump throughout his presidency. He cheered for Trump’s economic policies. He supported the tax cuts, the tariffs and his tough stance on China.

The Trump era hasn't been a boon for Indiana's factory towns. The sector was recovering from the Great Recession when Trump took office, but that began to stall in 2019. Then the coronavirus caused a plunge in factory jobs in the state, which are now down by almost 40,000 from a year ago.

Warner believes if Trump had gotten a second term, things might have improved. He worries the economy will stagnate under a Democratic administration.

“I think his tweets were part of his downfall,” Warner said. “But the people that voted for Trump didn’t vote for him for his personality. They voted for results.”

Joe Etling was certain that the people of Vigo County would punish Trump for his temperament. Every four years, Etling, who has run the county’s Democratic Party for 24 years, is asked by pundits and politicians to guess who will win the presidential election. This year he said Biden.

Etling refuses to accept that his county is fully Republican now.

In 2008, he saw how excited this community was about Obama. When Obama came to town, people packed a school gymnasium and screamed like he was a rock star. The county had from 1960 to 2004 voted within 3 percentage points of the national vote, but it broke that streak to vote overwhelmingly for Obama, who won this county by 16 percentage points. That margin narrowed considerably in 2012, when Obama won Vigo County by just a few hundred votes.

“And you would have to agree that those two gentlemen are about as diametrically opposed as anybody that you could think about. And yet people still did that," Etling said, and so he thinks they can turn it around again.

There was a bright spot for him in 2020. One of the few Democrats elected was Dr. Janie Myers, the new coroner and the first Black woman in history to win countywide office here.

So Etling is already starting to recruit Democratic candidates to run in local races in 2022, and he thinks it can reclaim its bellwether status.

But Tingley, at the county history museum, isn’t sure this place or any place can be a bellwether these days.

“It is all politics of fear and passion. It’s not about voting for who’s right for you. It’s about avoiding the candidate that scares you the most,” she said. “If it gets back to what’s best for the country, what’s best for individuals, what’s best for communities, I think that’s when the bellwether counties all across the country can hit it again.”

In the meantime, the city is trying rebrand itself.

The signs leading into town welcome visitors to the birthplace of the Coca-Cola bottle. A glass company here invented Coke’s iconic contoured container in 1915.

There's a mural of the bottle painted on the side of the history museum, and around the town are 39 6-foot-tall brightly-painted bottle sculptures. The goal is to promote Terre Haute as a cultural destination, steeped in Americana history.

Tingley would be happy if the city became known for that. It probably would be more reliable than predicting the president every four years.