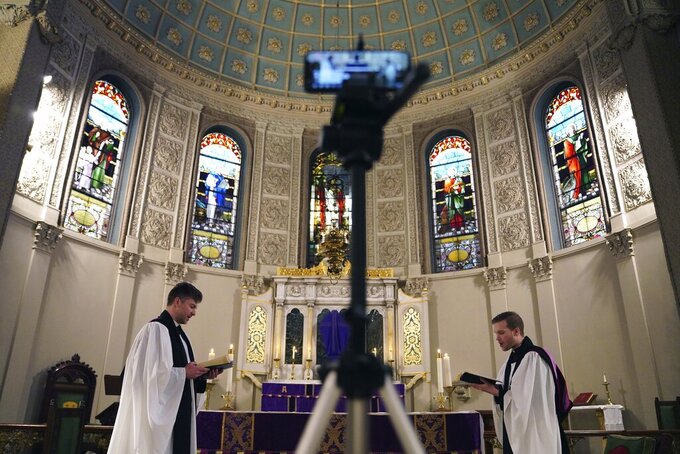 FILE - In this March 29, 2020 file photo, the Rev. Steven Paulikas, right, and curate Spencer Cantrell deliver an Evening Prayer service over Facebook Live in the Brooklyn borough of New York, amid the global COVID-19 coronavirus pandemic. Pastors across the country say they and their congregations have responded with creativity and resiliency — and invigorated community spirit — even as the outbreak forced widespread cancellations of in-person services. (AP Photo/Emily Leshner)

The coronavirus pandemic has posed daunting challenges for houses of worship across the U.S., often entailing large financial losses and suspension of in-person services. It also has sparked moments of gratitude, wonder and inspiration.

In the Chicago suburb of Cary, Lutheran pastor Sarah Wilson recorded a sermon aboard a small plane piloted by a congregation member. The video that went online showed a high-up view of idyllic landscapes.

“It was very spiritual,” Wilson said.

In New York, Episcopal priest Steven Paulikas heard from someone in France who watched a service via Facebook. “I loved your sermon,” was the message.

“It’s a new experience for me,” said Paulikas, of All Saints’ Episcopal Church in Brooklyn. “People I’ve never met before, from different states and countries, are joining us online.”

Such positive experiences are not uncommon. Clerics nationwide say they and their congregations responded to the pandemic and resulting lockdowns with creativity, resiliency and invigorated community spirit.

Financially, there’s no simple summary of how houses of worship have fared through six months of pandemic. Revenue at Wilson's church, St. Barnabas, has been stable even as it resorted to drive-in parking lot services. Paulikas says giving is up 19% at All Saints'.

But in the Roman Catholic Archdiocese of Chicago, offerings fell more than 75% early in the pandemic and remain down 25%, according to chief operating officer Betsy Bohlen, resulting in layoffs, furloughs and some asset sales.

The archdiocese, with over 2 million parishioners, has resumed in-person services with attendance limited to 20% capacity.

There are similar challenges in the Archdiocese of Washington, D.C., where in-person attendance is roughly a quarter of pre-pandemic levels and offertory revenue is down about 10% after plunging 30% early in the outbreak.

Its vicar general, the Rev. Daniel Carson, said there have been personnel cuts and departments been asked to trim budgets by 10%.

Live-streaming services has been successful, even attracting some non-Catholics, Carson said, but he hopes parishioners still yearn for in-person worship and Holy Communion.

At Friendship Baptist Church, a mostly African American congregation in Baltimore, pastor Alvin Gwynn Sr. has held in-person services throughout the pandemic, but attendance hasn't risen much above 80 people — a small fraction of normal. Giving by congregation members is about 60% of normal, enough to keep food-pantry programs running.

Ryan Radke, digital outreach coordinator for the Southeastern District of the Lutheran Church of the Missouri Synod, said the financial picture has been mixed for the district's 215 congregations from Pennsylvania to South Carolina.

Some churches are closing, but those were already threatened before the coronavirus, Radke said. Others are sharing resources as COVID-19 strains their ministries.

Some smaller churches have attracted large, far-flung online audiences — one drew over 1,000 to a recent virtual service, Radke said.

A United Methodist church in College Station, Texas, home to Texas A&M University, launched online services for students after they left campus. Soon relatives of students were tuning in from as far away as Utah and Michigan, regional Bishop Scott Jones said, with some even joining the church.

“We can’t gather the same way anymore, not in homes, not in schools and especially not in temples,” Rabbi Noah Farkas said via email. “Our community is gathering, just in very different ways. We are evolving rapidly from the past into the future."

The Southern Baptist Convention is the nation’s largest Protestant denomination with roughly 47,000 churches. Executive committee president Ronnie Floyd said offerings fell more than 20% at some churches early on, but finances are now stabilizing.

In September the committee reported that annual payments from SBC churches to fund missions, seminaries and administration were down less than 3% from last year, less than some leaders had feared,

Though there are no overall attendance figures, some SBC churches have fared well, such as Pleasant Grove Baptist Church in Owensboro, Kentucky. Its Sunday attendance rose from about 320 in June to over 470 in September.

New pastor Jonathan Bonar took charge in July and rankled some worshippers by asking everyone to wear masks at services. He defused the friction by organizing a best-mask competition for congregants.

In the United Methodist Church’s Mountain Sky region, covering Colorado, Utah, Wyoming and Montana, many pastors serve towns without reliable internet service, according to Bishop Karen Oliveto. One in Columbia Falls, Montana, kept in touch with older congregants by sending them handwritten notes.

“This is the church’s moment,” Oliveto said. “It’s pushed the church to leave the building — they’re coming alive in their communities.”

“Methodists love to sing hymns, but we’re being taught that it’s one of the most dangerous ways to spread the virus,” he said. “That's a real loss.”

Longer-term, Jones sees a possibility of profound changes in how pastors approach their ministries and wonders how the now-large online cohort will respond when in-church worship is fully restored.

“People have gotten used to watching services from their home in their pajamas with a cup of coffee,” he said. “Some are asking, ’Why do I need to go back to church?' But there also are a lot of people eager to see their Christian friends and be in a holy place again.”

The Rev. Walter Kim, president of the National Association of Evangelicals, is raising similar questions, such as whether people who converted to a faith after tuning in to online services will stick by their decisions.

Citing a recent survey, Kim said some evangelical online worshippers are sticking firmly with their pre-pandemic churches, others are “church shopping” after seeing alternatives and still others have stopped participating altogether.

Collectively, pastors characterized the pandemic as both a source of anguish and a motive for hopefulness.

“This pandemic isn’t going away anytime soon,” pastor Wilson said in her mid-flight sermon. “This is life here and now, a gift from God.”