Among the mainstays of 2020 claimed by the pandemic: Spring 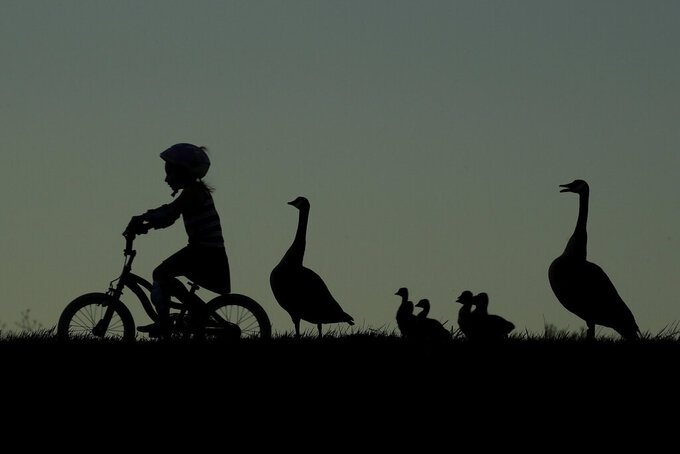 FILE - In this April 30, 2020, file photo, a girl rides her bicycle past a family of geese at South Lake park in Overland Park, Kan. (AP Photo/Charlie Riedel, File)

By the time spring arrived in the Northern Hemisphere, the pandemic had the world firmly in its grip.

The vernal equinox arrived March 19, the day California handed down the first statewide stay-at-home order in the United States. Most of the country would soon follow suit. In the coming weeks, vast swaths of humanity would be largely confined to their homes.

Now, midway through spring, people are already fretting about summer. The spring of 2020 — for human beings, at least — has become the season that isn't.

Long considered a time of renewal and rebirth, spring is ever more precious in a world beset by climate change. After dark winters, spring arrives and the earth turns green again. The word itself is shorthand for revolutionary movements — the Springtime of Nations (1848), the Prague Spring (1968), the Arab Spring (2010-2012). Igor Stravinsky chose “The Rite of Spring” in 1913 to chart new musical frontiers.

April lies at the heart of the poetic spring. Shakespeare takes a jaunty view of it in his “Sonnet 98,” personifying it as a month that “hath put a spirit of youth in everything.” In “The Waste Land,” when T.S. Eliot famously castigates “the cruellest month” of April as a time of “mixing memory and desire,” he might as well have described the entire season in the strange days of 2020.

“Right now, when we’re cooped up in our apartments ... we kind of get a glimpse of how we experienced spring last year, when we experienced all the people coming out into the streets and the rebirth of life,” says Matthew Mersky, who teaches a course on modern literature and the environment at Boston College.

“And we experience it now negatively," he says, "through memory or its absence.”

May isn’t looking that great, either. As the weather warms, sort of, many public pools and beaches are still inaccessible. Baseball stadiums remain empty; schoolchildren remain home. College students still shuffling from class to class in parkas were sent home before spring semesters could really live up to their name.

Spring's gifts aren’t completely out of reach, particularly as stay-at-home orders expire. But in hard-hit New York City, densely populated with millions who often have no backyards, residents are left to catch spring's sunshine by awkwardly angling from fire escapes and small balconies — or risk walks.

Samali Nangalama, 23, has lived in New York for six years and recently moved within walking distance of Harlem Hospital, where she awakens and falls asleep to the sound of sirens. As the virus ravages vulnerable black and brown communities, she describes a “paralyzing fear” that has kept her in her apartment this spring, a stark adjustment for a season she usually views as “a time ripe with opportunity and optimism.”

“I know it is assumed that Generation Z spends their life glued to screens, but there is no replacement for face-to-face contact,” says Nangalama, a junior studying global public health at New York University. “I miss this precious contact and this spring, I will feel more alone than ever.”

Beyond sunshine and milestones missed, spring is intertwined with culture and religion. Easter is quite literally about renewal. Sikhs commemorate the formalization of the faith on Vaisakhi, a holiday that shares its name with Punjab's spring harvest festival. May 1 marked Beltane, a fire festival of Celtic origin and a mid-spring sabbath celebrated by witches and pagans.

Haley Murphy, 32, the owner and operator of ATL Craft in Atlanta, has been working in occult practices for 14 years. For her, Beltane is a significant rite in which communing with the Earth through planting is a centerpiece. She says it's about "what needs to be planted, but also looking at each other and seeing us come out of our hermit shells of winter, watching each other bloom and get the sun on our faces and the freckles on our faces.”

But with social distancing mandates, her coven couldn't come together for Beltane, which she conducted in solitude this year. Amid the pandemic, she’s taken to sending members packages for other rituals, which are then conducted over FaceTime.

“We have to change with the times,” she says, “and we have to adapt.”

Spring is also a time to sow what can’t be reaped for months. But uncertainty is all that’s taken root for others whose future livelihoods depend on the metaphorical seeds typically planted during this time.

Katie Lloyd doesn’t even like spring. She thrives in winter, growing up in Buffalo, New York, and spending years partaking in mountain sports in Colorado. She now lives in Alaska, where she and her husband co-own the Alaska Dogstead Mushing Company with Iditarod musher Nicolas Petit.

Fresh off her own rookie season as a dogsledding musher, Lloyd says Alaskans call spring “breakup season” — not for relationships, but for the melting ice that creates “one big sloppy mess for a month or so" as snow becomes rain. It’s an important time, an opportunity to prepare for the summer tourist season that’s vital to Alaska’s economy.

That sense of uncertainty is pervasive, with so much unclear. Some countries and U.S. states have loosened restrictions, but experts fear that might cause a resurgence of infections that could, as the season progresses, produce months even crueler than April.

Absence is inherently intangible. That can make losses harder to measure. But many people will be delivered straight into the furnace of summer, emerging from the coronavirus months with losses that fundamentally alter their lives. Those voids are there to ponder while running down the clock on the spring that never was.

Mallika Sen is an editor on the East regional desk of The Associated Press. Follow her on Twitter at http://twitter.com/mallikavsen.