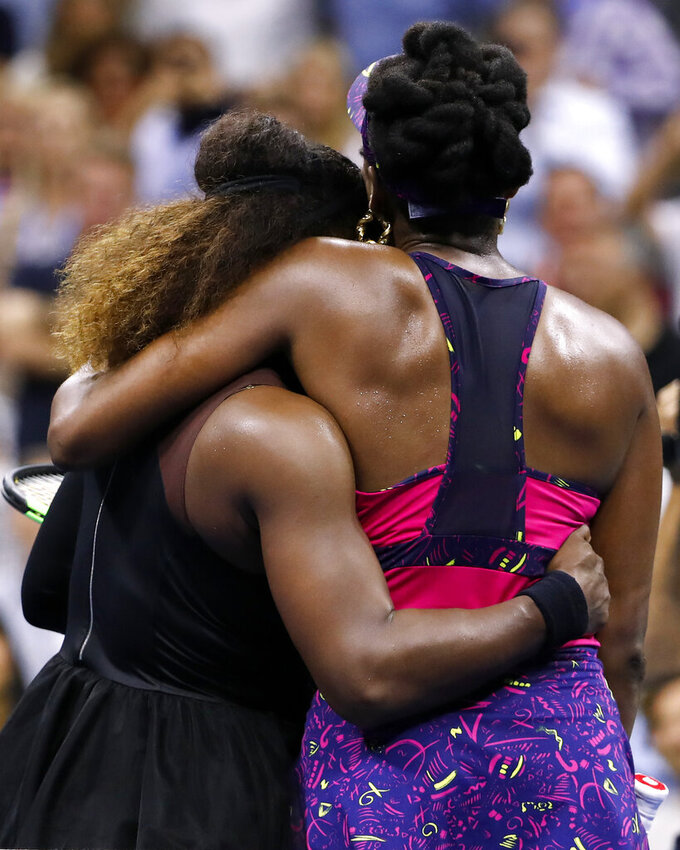 FILE - In this Friday, Aug. 31, 2018, file photo, Serena Williams, left, embraces her sister Venus Williams after their third-round match at the U.S. Open tennis tournament in New York. Serena Williams won 6-1, 6-2. The siblings meet each other for the 31st time when they take the court at a WTA tournament in Kentucky on Thursday, Aug. 13, 2020. (AP Photo/Adam Hunger, File)

Well, this sure is a fine way for tennis to herald its return after the pandemic-caused hiatus: Serena Williams vs. Venus Williams.

The siblings meet each other for the 31st time when they take the court at a WTA tournament in Kentucky on Thursday.

It’s a chance for the two former No. 1-ranked women and owners of 30 Grand Slam singles titles between them (23 for Serena; seven for her older sister) to gauge where their games are following about six months away from the sport — and a chance for tennis fans to remember what they’ve been missing while the tours were suspended because of the coronavirus.

“I haven’t played in forever, so I want to play the best players,” Venus said with a laugh, then added: “And I think I got my wish in playing Serena.”

So what if there are no spectators allowed at the hard-court event because of the coronavirus outbreak?

So what if it’s happening at a low-key, brand-new tournament, where traffic can be seen driving back and forth on a street behind the court?

And so what if it’s merely in the second round, rather than with a trophy at stake?

Sure, all in all, this will be a far way from the sorts of stages that have hosted these two stars in the past, including nine Williams vs. Williams matchups in Grand Slam singles finals, including four in a row from 2002-03.

“I feel like I always play Venus in every single tournament, first or second round,” Serena said after needing to put together a comeback to beat 60th-ranked Bernarda Pera 4-6, 6-4, 6-1 in her opening match in Kentucky and first anywhere since February. “So that’s annoying.”

What both they and others should remember is that there is no way to know how many more of these there will be. Venus, after all, turned 40 in June. Serena turns 39 in September.

As the Aug. 31 scheduled start of the U.S. Open approaches, this match is a chance for the two of them to test themselves and the changes they’ve been making.

These are not two people who seem as if they’re ready to stop competing any time soon.

Serena has switched to a smaller racket head in 2020 because, she explained, “I wanted more control.”

She was not at her best at the outset against Pera, even getting pushed to the precipice by falling behind love-40 at 4-all in the second set after dropping the first. But Williams steadied herself to grab that game, beginning a run in which she took eight of nine.

Venus, meanwhile, used the long break in action to alter her service motion and forehand, which both looked in good shape during her much easier first-round victory in Kentucky, 6-3, 6-2 over former No. 1 and two-time major champion Victoria Azarenka.

“I used this offseason — forced offseason — to just reevaluate what I really wanted out of my game. You got time to make a few tweaks here or there and that’s what I did,” said Venus, who faced only one break point and saved it against Azarenka. “I’m quite happy with it. Obviously the more matches I play, the better I’ll get.”

Tennis is only just taking its initial steps back, starting with a women’s tournament on clay in Palermo, Italy, last week, and two events this week. The men still haven’t resumed; that is supposed to happen next week.

Soon enough, if all goes well amid the pandemic, there will be Grand Slam competition in less than three weeks. But for now, there is Serena vs. Venus, a reminder of what big-time tennis feels like.

“I’m going to definitely be watching, if I’m not practicing or anything,” said 16-year-old American Coco Gauff, who grew up admiring the Williams sisters and beat Venus at Wimbledon last year and the Australian Open this year. “This could be the last time they play. I don’t know. But we always say that — and then they end up playing each other again.”

Howard Fendrich covers tennis for The Associated Press. Follow him on Twitter at http://twitter.com/HowardFendrich or write to him at hfendrich@ap.org