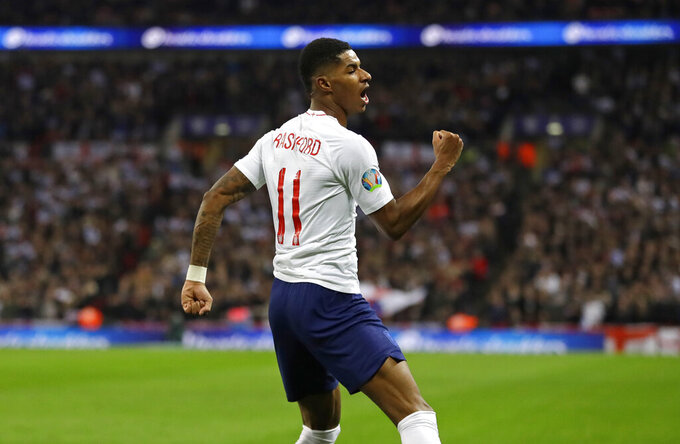 FILE - In this Thursday, Nov. 14, 2019 file photo England's Marcus Rashford celebrates scoring his side's fourth goal during the Euro 2020 group A qualifying soccer match between England and Montenegro at Wembley stadium in London. British Prime Minister Boris Johnson made an abrupt about-face Tuesday June 16, 2020 and agreed to keep funding meals for needy pupils over the summer holidays, after a campaign headed by young soccer star Marcus Rashford. The Manchester United and England player has been pressing the government not to stop a meal voucher program at the end of the school term in July. (AP Photo/Kirsty Wigglesworth, File)

MANCHESTER, England (AP) — A Premier League shutdown that began with the British government trying to shame stars over their wealth ended with admiration for a player's determination to ensure children won't starve.

Manchester United forward Marcus Rashford received an unprecedented outpouring of congratulatory messages ahead of Wednesday's resumption of the world's most followed soccer league.

“Amazing to see your efforts rewarded and to know so many will benefit,” the England national team account tweeted. “We’re so proud of you, Marcus.”

It's not often anyone — let alone a footballer — secures a government U-turn, especially so swiftly.

“Make protecting the lives of some of our most vulnerable a top priority,” Rashford wrote to politicians.

Only after a pubic furor escalated Tuesday did Johnson back track.

“I thank him for what he’s done,” Johnson said in Downing Street.

It was at the same podium three months ago, early in the coronavirus pandemic, that the government tried to shame stars of the world’s richest league. The deaths of National Health Service workers were invoked by Health Secretary Matt Hancock as he singled out footballers to “take a pay cut" — he did not mention any other high earners.

“I think that everybody needs to play their part in this national effort,” Hancock said, “and that means Premier League footballers, too.”

Rashford had more more than played his part, using the weeks without games and his profile to raise 20 million pounds ($25 million) for the Fareshare UK charity supplying meals to families in need.

Football facilities were used to assist the national effort to eradicate COVID-19. There was the testing in the grounds of Manchester City, which will host Arsenal on restart night on Wednesday. Tottenham, which angered politicians by initially seeking to use a state-funded furloughing scheme, repurposed its north London stadium for maternity services to free up capacity at a local hospital.

“I think we’ll look back on the last three months with some pride at the way football as an industry has responded to some of the challenge,” Premier League chief executive Richard Masters said.

Politicizing footballers has backfired on the government.

“I think some of the criticism has been unfair,” Masters said Tuesday, while crediting the government for backing the league’s return. “The players themselves have stepped up, made their opinions and voices heard on some of the issues society is facing.”

A new generation of activist athletes has emerged in the absence of sport, led by Rashford.

“His perseverance and the way he’s gone about it have obviously moved the government,” Masters said.

“I wouldn’t see what is going in terms of the messages being overtly political, I see them as ethics based, values statements."

Raheem Sterling of rival Manchester City made a rare appearance for a player on a flagship political TV show to decry racial injustice in society and discrimination in his own sport.

And alongside fellow players, Sterling launched a #TimeForChange campaign video that ended with him saying: “I will never tire of being black.”

The league is more reticent to say how it can create a more inclusive environment.

“I don’t want to set targets on the hoof,” Masters said. “All I can say is that we are totally committed to that dialogue and will be following that up with our clubs.”

He is sure to be hearing from players demanding substantive changes, too. The activism of Rashford and Sterling has shown their influence extends far beyond the field.

Stadiums went silent during the lockdown, the players didn't.

Eventually, the government heard them.