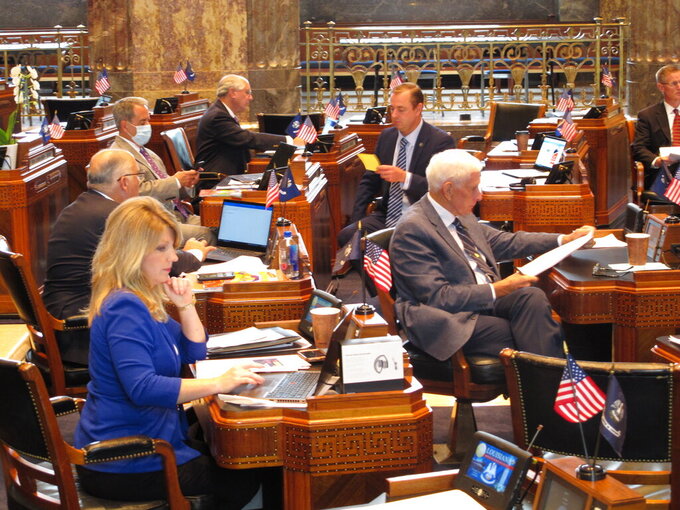 Louisiana state senators read through messages and bills on the Senate floor as the Legislature wraps up its regular session on Monday, June 1, 2020, in Baton Rouge, La. (AP Photo/Melinda Deslatte)

BATON ROUGE, La. (AP) — Business groups are gaining a stronger foothold and demonstrating intensified influence in the Louisiana Legislature, after term limits wiped out many former lawmakers and industry-backed candidates won many of those vacant seats.

In the regular session that ended June 1 and the ongoing special session, the majority-Republican House and Senate are working to enact a long-sought business goal. The sweeping set of changes to the state's civil litigation system would lessen the damages that can be awarded against insurance companies in car wreck lawsuits.

Lawmakers also have passed measures to shield businesses from most lawsuits related to coronavirus injuries and deaths unless someone can prove the high legal standard of “gross negligence or willful misconduct.”

And legislators are advancing a package of business-backed tax breaks, including some measures that would reverse hard-fought efforts across the last two legislative terms to scale back tax credits and exemptions that ballooned well beyond expectations and helped create systemic budget gaps.

In a strong sign of their influence, business lobbyists and local Chambers of Commerce crafted much of the agenda for the ongoing special session.

Still, while those business groups have made significant inroads with Louisiana’s lawmakers, their footing remains more tenuous with Democratic Gov. John Bel Edwards, who could determine the fate of some measures with his veto pen. Republicans don't have enough votes to override an Edwards veto on their own, complicating the business and industry agenda.

Business organizations suggest the coronavirus outbreak intensified the need for passage of proposals that they have unsuccessfully pushed for years. GOP lawmakers, many of them business owners themselves, say retailers, restaurants and other companies need support now more than ever, as they struggle to reopen after virus-forced closures and restrictions.

“It’s our job to jumpstart the economy,” said Rep. Stuart Bishop, the Lafayette Republican who chairs the House tax committee.

Republican Rep. Les Farnum, a freshman lawmaker from Sulphur, described a perspective repeated by many of his colleagues about the “need to do everything we can" to help business amid the COVID-19 disease caused by the coronavirus.

“The total revenue of the state is going to be greatly affected if we don’t get businesses back up on their feet,” Farnum said.

Democrats are mixed in their reaction to the business-backed priorities.

They've bristled about rewriting the rules for filing and handling the car wreck lawsuits, arguing the changes would damage access to the courts and lessen compensation for people with injuries.

Edwards vetoed that bill passed in the regular session, saying it didn’t offer a commitment to lower insurance rates as its supporters promised. GOP lawmakers are trying to pass a new version in the special session, though it's unclear if they can find common ground with the governor or muster enough votes to override a possible second veto.

Democrats showed fewer objections to the bills making it harder to sue businesses for coronavirus injuries, though Edwards hasn't made a decision about those measures.

And Democratic lawmakers so far supported have some of the business tax breaks moving through the House and Senate as a needed boost to help the economy in the coronavirus pandemic.

Democratic Rep. Malinda White, a business owner from Bogalusa, backed some of the tax breaks during House committee debate. But she also cautioned that lawmakers need to closely monitor the tax credit and exemption actions to keep from returning the state to the prior decade of budget shortfalls that eventually prompted tax hikes to stabilize state finances.

“It was a nightmare,” White said. “We have to be very, very careful.”

Rep. Ted James, a Baton Rouge Democrat who was hospitalized with complications from COVID-19, has slammed the entire special session as a giveaway to business. He said business groups are seeking to tie a long-held wish list of tax proposals that failed in previous sessions to virus recovery in hopes of gaining traction for the ideas.

“It's shameful,” James said. “They're taking advantage of a brand new Legislature.”

Edwards, meanwhile, hasn't said what he'll do on any of the tax break ideas, though he's expressed some reticence toward the approach.

“As well-intentioned as many of these instruments are, it’s difficult to support instruments that would have the effect of diminishing the revenue that we have available to fund the essential services of our state when we already have budgetary pressures,” the governor said.

EDITOR’S NOTE: Melinda Deslatte has covered Louisiana politics for The Associated Press since 2000. Follow her at http://twitter.com/melindadeslatte