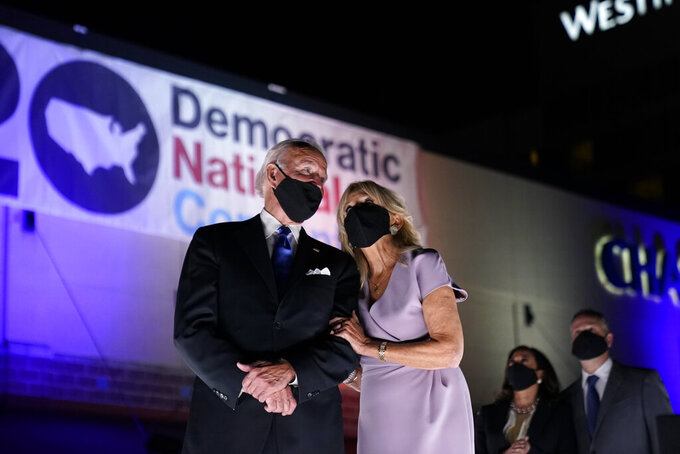 WASHINGTON (AP) — Nearly everything in American life has changed in the 16 months between the launch of Joe Biden’s White House campaign and his address Thursday night as the Democratic presidential nominee. A pandemic has killed more than 170,000 Americans and remade work and school. A soaring economy is now sagging.

Yet Biden’s bet on the 2020 race has remained unchanged — a belief that the nation is less partisan and more open to compromise than it often appears on social media or cable television panels. That voters are seeking decency over ideology, a reset over a revolution. That after four years of President Donald Trump’s administration, what mattered most to Democrats was winning.

Many questioned Biden’s premise during the primary, viewing the 77-year-old career politician as a candidate as out of step — in age, race and ideology — with a diverse party increasingly tilting to the left and seeking generational change. Some still worry that Biden won’t draw out enough young and liberal voters this fall.

But Biden’s nominating convention this week was filled with evidence validating his approach: that fierce opposition to Trump can unite a wide swath of the American electorate around an imperfect, yet personally respected and empathetic, candidate.

Indeed, the four nights of virtual programming prominently featured both Republicans, including former Ohio Gov. John Kasich, and some of the most liberal members of Congress, including Vermont Sen. Bernie Sanders, vouching for Biden’s character and experience. Speakers heralded Biden’s ability to work across the partisan divide, while gauzy videos touted progressive policies for tackling climate change, gun violence and immigration.

And as Biden stepped forward to accept his party’s nomination Thursday, 33 years after he first ran for president, he vowed to put country — not party or personal power — above all else.

“I am a proud Democrat and I will be proud to carry the banner of our party into the general election,” Biden said as he accepted his party’s nomination on the convention’s final night. “But while I will be a Democratic candidate, I will be an American president.”

Biden’s big tent political philosophy can at times feel like an antiquated throwback to an era that no longer exists, or a misread of the political environment that would await him in Washington if he wins in November. Even a sweeping Electoral College victory would likely be read more as a repudiation of Trump than a full embrace of Biden’s own governing philosophy. Republicans who are comfortable with Biden as an electoral alternative to the incumbent president may nevertheless be less inclined to vote for his economic and domestic policy agenda.

And there were already some signs of intraparty Democratic discontent amid the convention celebrations. Some progressives who only reluctantly endorsed the more moderate Biden after the Democratic primary chafed at the numerous GOP convention speakers in the program and made clear they would be waiting to push Biden to the left if he wins in November.

“A lot of what you’re seeing is like the beginning of the tension that will come to the fore in a Biden administration,” said Waleed Shahid, spokesman for the progressive group Justice Democrats.

But the convention’s frontal focus on the former vice president’s “come one, come all” approach to politics was about more than how Biden would negotiate legislation and whip votes in Washington. It was meant to draw a direct contrast with Trump, who appears to view not only politicians, but most Americans in black and white terms: those who support him unequivocally and those who do not.

“People saw a lot more of the content of Biden’s character, a lot more of the soul of the man,” said Jesse Ferguson, a Democratic strategist who worked on Hillary Clinton’s 2016 campaign. “That contrast with Trump was everywhere you turned.”

The contrast will grow even sharper next week when Trump headlines the Republican convention and the race barrels toward November. Trump has made little concrete effort to expand his appeal beyond his most loyal supporters, and if anything, his struggle to contain the coronavirus pandemic has put at risk his advantages with older voters and some more moderate Republicans.

Not only will there be no prominent Democrats crossing the aisle to speak on Trump’s behalf at his convention, elder statesmen in his own party, including former President George W. Bush and 2012 GOP nominee Mitt Romney, won’t publicly vouch for him.

Part of Trump’s strategy in the campaign’s final stretch will be casting Biden as past his prime, a mentally diminished candidate who would simply be a vessel for the priorities of far-left Democrats. But at least on Thursday, as Biden addressed his convention, that strategy appeared to backfire, helping Biden exceed the low expectations set by his rival with a focused and serious speech.

“If you entrust me with the presidency, I will draw on the best of us, not the worst,” Biden said. “I will be an ally of the light, not the darkness.”

Editor’s Note: Julie Pace has covered the White House and politics for the AP since 2007. Follow her at https://twitter.com/jpaceDC.