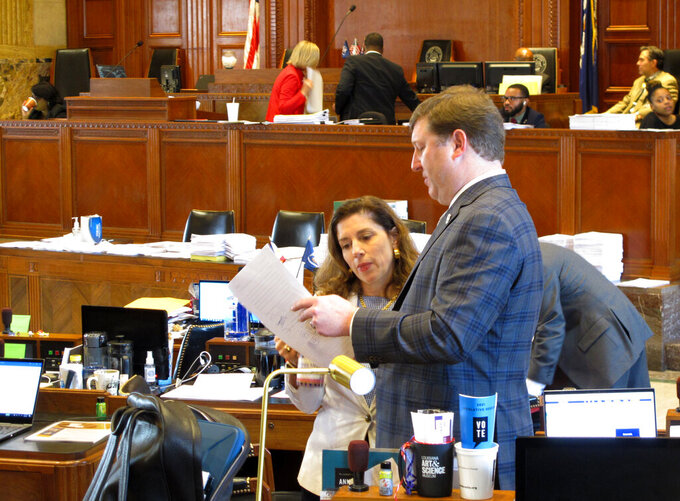 Louisiana has nearly 1,300 water systems statewide. About half are operating off structures that are more than 50 years old, according to reports documenting their vulnerabilities. In some rural areas, systems are teetering on the brink of failure and face such significant population loss they don't have enough money for proper maintenance.

“If we fix everybody and everything that should be fixed, it’s about $4 billion in estimated costs,” Desiree Honoré Thomas, with the Democratic governor's Division of Administration, told lawmakers.

That hefty sum still might have been underestimating the scale of the problems. A 2018 U.S. Environmental Protection Agency suggested Louisiana’s 20-year funding needs for drinking water infrastructure topped $7 billion.

“We now have what we believe are the resources to make a meaningful impact and change on these systems,” said House Appropriations Chairman Jerome “Zee” Zeringue, a Houma Republican.

Zeringue is co-chairing a 10-member legislative Water Sector Commission created to decide which community water and sewer systems should share in the $300 million in federal pandemic aid. It already held its first meeting.

The Edwards administration, which will run the application portal and handle the grants, told the commission it intends to submit recommendations for prioritizing projects by mid-July with an eye toward opening the application period Aug. 1.

The need to harden water infrastructure is an obvious, bipartisan issue.

When Hurricane Laura struck a wide path of destruction across Louisiana in August, it knocked out 121 water systems and temporarily left hundreds of thousands of people without water. Another 150-plus water systems had disruptions that required people to boil their water for safe use.

The February winter storm that dropped snow and ice across Louisiana walloped the systems again, leaving hundreds of thousands without potable water and hospitals trucking in water for patient care.

William Daniel, director of Shreveport’s water and sewerage system, believes even the multibillion-dollar estimates of the problem are understated. He told lawmakers the city of Shreveport, which suffered a week of water outages in February, probably has $2 billion in needs alone.

Lawmakers also intend to make the lists of the state's most fragile water systems more widely known — and the problems more understandable — to the public through a new grading system.

The bill creating the grading, pushed by St. Martin Parish Republican Sen. Fred Mills, won unanimous legislative support and has been signed into law. It will require the Department of Health to develop a grading system from A through F, similar to the way the education department grades public schools.

When someone can see an F-rated system, "it causes the public to say, ‘Why do I have to live under this type of water system?’" Mills told lawmakers.

Water systems will be judged on their water quality violations, financial sustainability, customer satisfaction and other benchmarks. The health department will have to publish the grades online. Any community water system that receives a D or F could be subject to corrective measures and will have to submit improvement plans.

Mills hopes communities that get water from poorly rated systems might have discussions about consolidating with better rated systems. While Louisiana has nearly 1,300 water systems, he noted Alabama has about 400.

Some water system leaders spend money on unrelated projects, while others don't want to suggest needed price hikes for consumers because they don't want to hurt themselves politically, Mills said.

“I think by having this score carding system, it’s going to glaringly bring out weaknesses that some water systems just don’t want to face,” he told his colleagues.

The first grades aren't due until 2023 — but the state could issue them sooner to dovetail the effort with the financing.