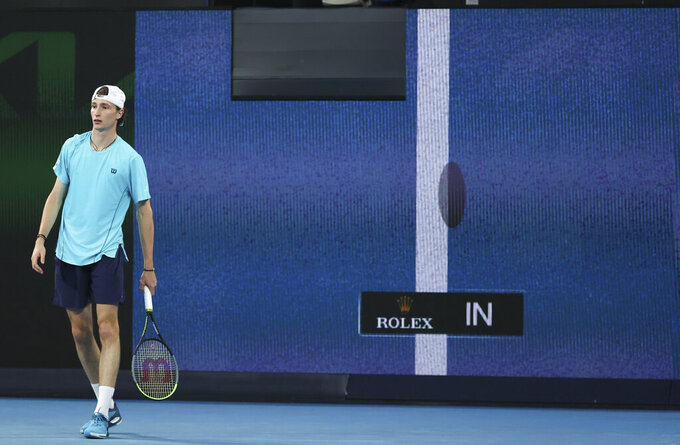 France's Ugo Humbert waits as a video replay is shown behind him during his second round match against Australia's Nick Kyrgios at the Australian Open tennis championship in Melbourne, Australia, Wednesday, Feb. 10, 2021. Eliminating all line judges and removing the human element from officiating at the Australian Open might have been a necessary step to reduce the number of people on court amid a pandemic. It also might be good for the integrity of the game, because getting every call right matters so much to players and fans. (AP Photo/Hamish Blair) 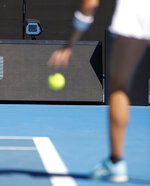 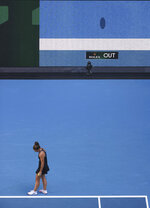 Eliminating all line judges and removing the human element from officiating at the Australian Open might have been a necessary step to reduce the number of people on court amid a pandemic.

It also might be good for the integrity of the game, because getting every call right — or as close to that as possible — matters so much to players and fans.

What there is no doubt about, however, is this: The proliferation of live electronic line-calling tends to be worse for the spectacle of the sport, an element tennis definitely needs. Players can’t challenge a call from the machines at Melbourne Park (a replay is shown in the arena after a ball lands within 2 inches of a line on a serve or within 6 inches on any other shot), so there isn’t much sense in lodging a complaint during the first Grand Slam tournament played with zero line judges.

Let's hope that doesn't hasten the disappearance of histrionics.

“That’s the only downside: There’s no one to argue with,” Tommy Paul, an American ranked 53rd, said in a video interview with The Associated Press this week. “There’s no one to blame when you feel like you might have made a ball but it was actually out.”

Jennifer Brady, a U.S. Open semifinalist in October and seeded 22nd in Australia, sees that aspect as a benefit: “I would rather not argue with people. ... If it’s out, it’s out. If it’s in, it’s in.”

Both Paul and Brady, like most players, say they appreciate the intention of adding accuracy with automation.

“There’s a neutrality to it,” Canada's Rebecca Marino said.

Not all are convinced of its perfection.

Not all are subtle about their misgivings, either.

Frances Tiafoe, a quarterfinalist in Australia two years ago, described the new arrangement as “horrible” — and modified that word by preceding it with a two-syllable expletive.

“I hate it,” Tiafoe said Wednesday after questioning calls in a second-round loss to No. 1 Novak Djokovic. “I cannot stand it.”

After a first-round exit, British qualifier Francesca Jones called the system “extremely questionable,” saying one shot by her opponent that was called in was shown on TV to have landed out.

“I much prefer human error than systematic error,” Jones said, urging that the setup “be revised.”

Reilly Opelka, meanwhile, disagreed with a series of foot faults during his first-round win, yet is willing to overlook that flaw.

“It’s shocking some of the line calls and overrules you’ll see with refs. It frustrates the players. You spend a lot of time training, and then it happens on big points,” said the American, who is ranked 38th.

Letting cameras and computers make decisions “just eliminates all confrontation,” Opelka said. “I’m a big fan of it. I hope every Slam does it.”

Serena Williams is no stranger to disputed Grand Slam calls, including a foot fault at the end of her 2009 U.S. Open semifinal loss to Kim Clijsters — and wildly wrong rulings that went against the 23-time major champion during a 2004 quarterfinal loss to Jennifer Capriati at Flushing Meadows, a match that hastened the advent of replay reviews in tennis.

Williams thought “it was different; it was weird” when she first played with no on-court officials other than the chair umpire.

“I like it now, because ... it takes away a lot of the human error, which clearly I definitely don’t need,” Williams said, punctuating the line with a knowing roll of her eyes and wave of her hand. “I should be the biggest fan of that.”

Even Tiafoe, a 23-year-old American ranked 64th, knows this sort of thing is not likely to go away (there was fully electronic line-calling at all but two courts at last year's U.S. Open).

“I get technology is at a crazy-high level. I’m just not a believer in it,” he explained. “It doesn’t matter what I say. They’re not going to change anything because Frances Tiafoe said it, (but) I’m never going to be for it.”

Let's leave the last word on this subject to John McEnroe, he of the infamous tirades at officials during a playing career that featured seven Grand Slam singles trophies.

Not surprisingly, he's fine with taking calls away from line judges.

“If you like the human element, I have a better idea: Have the players call the lines,” said McEnroe, an announcer on ESPN's Australian Open coverage. “Then you’ll see some interesting developments.”

Howard Fendrich covers tennis for The Associated Press. Write to him at hfendrich@ap.org or follow him on Twitter at https://twitter.com/HowardFendrich