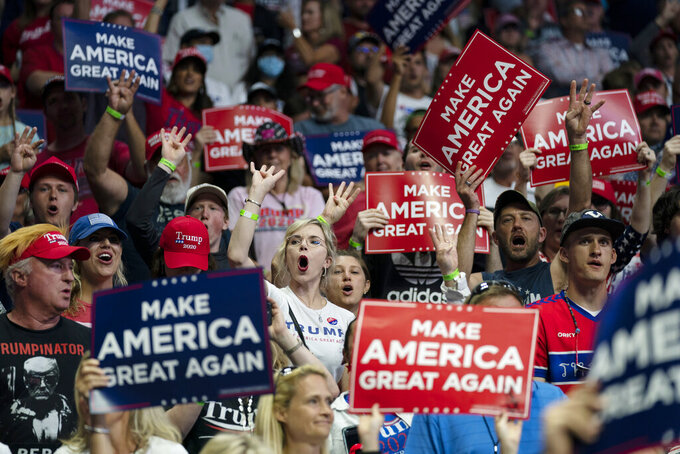 Supporters of President Donald Trump cheer as Vice President Mike Pence speaks during a campaign rally at the BOK Center, Saturday, June 20, 2020, in Tulsa, Okla. Trump is asking Americans to let him keep his job. His critics are asking how much of that job he’s actually doing. Those questions have gotten louder in recent days following revelations that Trump didn’t read at least two written intelligence briefings detailing concerns that Russia was paying bounties to the Taliban for the deaths of Americans in Afghanistan. (AP Photo/Evan Vucci)

WASHINGTON (AP) — President Donald Trump is asking Americans to let him keep his job. His critics are questioning how much of that job he’s actually doing.

The questions have gotten louder in recent days following revelations that Trump didn’t read at least two written intelligence briefings about Russia paying bounties to the Taliban for the deaths of Americans in Afghanistan.

He also appeared to either downplay or miss repeated warnings about the coronavirus that were included in intelligence briefing s, and he has been reluctant to amplify some of his own government’s recommendations for reducing transmission, including wearing masks.

“He is not doing his job,” said Michael Hayden, the former director of both the CIA and National Security Agency.

Such assessments put Trump in a precarious position four months from Election Day, and risk undercutting the central argument most incumbents make to voters when seeking re-election: Keep me on the job because I’ve proven I can do it.

Instead, Trump’s uneven handling of the crises battering the nation, as well as the new revelations about his lack of attention to intelligence, have given Democrats an opening to argue to voters that the president has proven he is ill-equipped to lead the nation through tough times, or outright absent in moments that demand leadership.

“It seems like our wartime president surrendered, waved the white flag and left the battlefield,” said Joe Biden, Trump's Democratic opponent in the presidential race. Biden, who spent more than three decades as a senator and eight years as vice president, is pitching himself to voters as a steady and experienced hand.

Trump came to power without any experience in governing, making the case to voters that the go-with-your-gut decisions that helped him in business and as a reality television star would serve him as president, too. For some Americans disillusioned with career politicians in both parties, his outsider credentials were part of the appeal.

Trump has indeed taken an unconventional approach to the presidency. He’s known to demand only the sparest detail in his briefings, and his workdays frequently include hours watching cable news and posting on Twitter. White House aides have at times been leery of delivering bad news to him for fear of sparking an angry reaction, according to current and former advisers. They said there is particular concern in the West Wing about discussing Russia because the subject can send Trump into a tirade about accusations that he has a too-cozy relationship with Vladimir Putin and about the special counsel investigation into Russian interference in the 2016 election.

The current and former advisers insisted on anonymity in order to discuss their private dealings with the president.

Trump’s tweets for any occasion and obsession with dominating the news cycle, even if it involves something negative, has sustained him for much of his presidency, when many of the crises were of his own making or fleeting in nature. Republicans often bristled at his tone and tweets, but justified their support for him by pointing to the strong economy and the new generation of conservative judges he nominated to the courts.

But 2020 has been a year that has demanded more substance than style from the president. More than 120,000 Americans have died from COVID-19, and known infections are on the rise in several states. The strong economy Trump hoped to run on this year has cratered. And the deaths of several Black Americans has sparked a national reckoning over race and police brutality.

On each of those matters, Trump’s critics — as well as some of his allies — argue he has fallen short rather than rising to the moment.

He’s all but declared the pandemic over and has focused aggressively on reopening the economy, even as some Republican allies in key states start rolling back those efforts in a bid to contain outbreaks. Just 37% of Americans say they approve of Trump’s handling of the pandemic, down from 44% in March, according to a recent poll from The Associated Press-NORC Center for Public Affairs Research.

The president has also been largely absent from the discussion of systemic racism in America following the death of George Floyd, a Black man who died when a white police officer pressed his knee into Floyd's neck for several minutes. Trump has focused much of his energy on the subject of racism on defending the prominent placement of memorials to Confederate figures.

Democrats also say the revelations over the past week that the president may not have read or absorbed intelligence briefings have put a finer point on the questions they are raising about his basic competency. The White House insisted Trump was unaware of assessments that Russia had put a bounty on U.S. servicemembers in Afghanistan, though intelligence officials told The Associated Press the matter was included in at least two written briefings over the past year and that senior advisers alerted the president to the intelligence.

“At best, our commander in chief is utterly derelict in his duties, presiding over a dangerously dysfunctional national security process that is putting our country and those who wear its uniform at great risk,” Susan Rice, who served as President Barack Obama’s national security adviser and is under consideration to be Biden’s running mate, wrote in a New York Times opinion piece.

Some Republicans have defended Trump, including Texas Sen. John Cornyn, who told reporters the president “can’t single-handedly remember everything, I’m sure, that he’s briefed on.” And White House press secretary Kayleigh McEnany stated: “The president does read.”

“This president is the most informed person on planet Earth,” she declared.

To Democrats, what's transpired in the White House was foreshadowed during the 2016 campaign, when Hillary Clinton argued that Trump simply wasn't prepared for the presidency. Voters still chose him over the experienced former senator and secretary of state.

Now, Democrats believe their case about competency is more compelling given that Trump has a record in office to defend.

EDITOR'S NOTE: Julie Pace has covered the White House and politics for AP since 2007. Follow her at http://twitter.com/jpaceDC