Analysis: For USA Basketball, the time is now to fix things 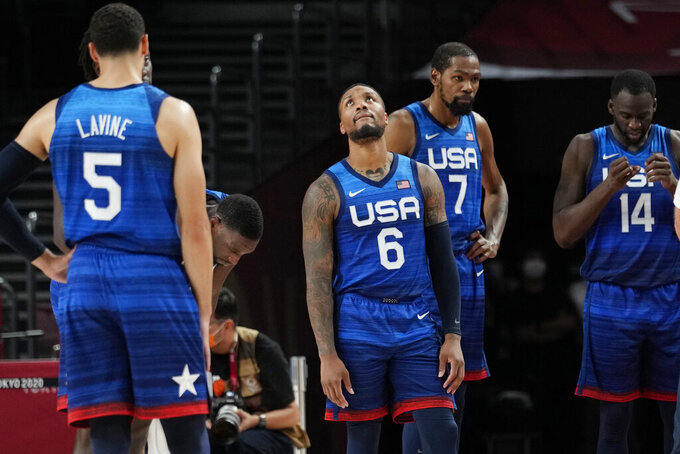 SAITAMA, Japan (AP) — Time would solve many problems for the U.S. men’s basketball team right now. A few practices to develop chemistry and figure out exactly how these roster pieces fit together would do wonders.

There is no time. Or, more accurately, this is the time. The U.S. men have two games left in group play at the Tokyo Olympics — Wednesday against Iran and Saturday against the Czech Republic — to figure whatever needs to be figured out. An opening loss to France on Sunday didn’t seem to surprise the French much, and in a more ominous sign, didn’t seem to surprise the Americans that much either.

“This is the time for us to really hone in, lock in,” U.S. center Bam Adebayo said after the 83-76 defeat at the hands of the French.

He’s right. The game against Iran — FanDuel says the Americans are 37.5-point favorites — on Wednesday should be a way to build some momentum, going into what could very easily be a win-or-go-home game against the Czechs.

Win both, and the U.S. is headed to the quarterfinals and with a very real chance to win the whole thing. Lose one of the next two, and this almost certainly will go down as the worst showing ever for a nation that has never gone to the Olympics and not won a medal.

“I think that’s just what the expectations are when you play for Team USA,” guard Damian Lillard said after the Americans wasted a seven-point lead in the fourth quarter in the loss Sunday. “I think we have a history of dominance and, maybe not always blowing people out, but we have a history of winning. It’s not often that you see Team USA go out there and lose, especially to start.”

He added, “I think that’s why a lot of people make it seem like the end of the world.”

Losing to France wasn’t the end of the world. The U.S. still has time to get things right. And there is reason for hope that things will get better for the Americans.

Khris Middleton, the second-best player on the NBA champion Milwaukee Bucks, played only 5-1/2 minutes on Sunday and missed both of his shots. Devin Booker went 1 for 6. In both cases, it’s reasonable to say that flying 6,600 miles the day before just to get to Tokyo after the NBA Finals probably had some sort of effect on their performance.

Lillard shot 3 for 10. Kevin Durant shot 4 for 12. The Americans shot only 31% from 3-point range. They overpassed on some possessions, turning down layups and shooting 3’s instead. There didn’t seem to be a ton of interest in defense at certain times; Jrue Holiday was a clear exception to that rule, picking up full court even after being on that long flight with Milddleton and Booker.

“If we put together some good possessions down the road, we’ll be fine,” Durant said.

Thing is, there’s been that sense — “we’ll be fine” — since the exhibition losses to Nigeria and Australia. They’re not fine. This team has been together, in full, for exactly one game. The chemistry isn’t there. It’s a bunch of highly talented individuals who know each other and like each other, but if they were a band they would just be making sounds right now in jam sessions. Music isn’t happening.

“I think we are more than capable of doing it,” said Lillard, who knows a thing or two about how to make music. “I think our No. 1 challenge has been taking a group of talented individuals and turning into a team, in a short amount of time.”

They’ve been saying that for a while now.

And yes, it's clear that the experience other nations have is an advantage for those teams. France’s core has played together for years. Spain, Argentina and Australia, too. They all smell blood. They all think the U.S. is vulnerable, and the U.S. is doing nothing to dispel that notion.

“You can definitely tell they’re tired of the USA winning,” Adebayo said. “Everybody wants that feeling of getting that gold medal. And we can’t rely on talent all the time to just bring us home.”

Adebayo said the Americans know their backs are against the wall now.