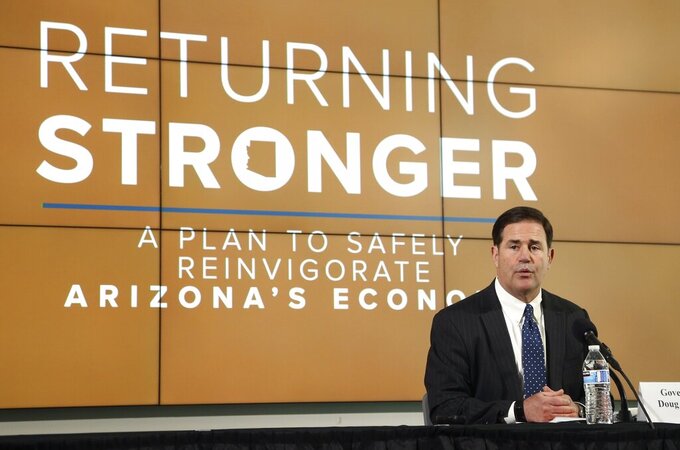 FILE - In this May 20, 2020, file photo, Arizona Gov. Doug Ducey speaks during a news conference in Phoenix to give the latest updates regarding the coronavirus. While the Republican governor has never discouraged the use of masks, his full-throated endorsement of them Monday, June 29, was a big change from a largely lukewarm stance the last few months. (AP Photo/Ross D. Franklin, Pool, File)

PHOENIX (AP) — After telling Arizonans that many public places were again being closed amid a surge of coronavirus cases, Gov. Doug Ducey ended a somewhat contentious news conference by imploring people to wear face masks.

“Arm yourself with a mask,” he said Monday after issuing an executive order to shut down bars, nightclubs and water parks while pushing back the start of school in the fall. “It’s your best defense against this virus.”

While the Republican governor has never discouraged the use of masks, his full-throated endorsement of them was a big change from a largely lukewarm stance the last few months.

“There are some people that can’t wear masks for whatever reason, shortness of breath or they are asthmatic,” Ducey said June 13 when asked why he wouldn’t mandate the use of them.

The change in tone on masks and a return to restrictions are the latest signs that Ducey, similar to some other Republican governors nationwide, is being forced to set political considerations aside amid surging cases.

“He saw that medically and even politically he needed to do something,” said Mike O’Neil, an Arizona pollster and political analyst. “The greater political risk would be if those figures continue to go through the ceiling and he didn't act."

Just a week ago, Ducey attended a Phoenix event in a church with President Donald Trump that featured many attendants not wearing masks. Ducey wore a mask when in the crowd during the event. However, he did not wear one while touring a section of the U.S.-Mexico border with Trump earlier in the day.

A few days before the Phoenix event, Ducey allowed mayors to make wearing masks in public places mandatory, a turnabout after weeks of pressure to allow cities to do more slow the virus spread. Ducey had resisted allowing such measures, arguing that they lead to a patchwork of regulations.

“The governor made the wrong call (on masks) early on and he doubled down on that" by waiting too long to let cities decide for themselves, said state Rep. Reginald Bolding, a Democrat.

Several cities, including Phoenix, immediately put into place mask-wearing orders. That set up an awkward situation for Trump's June 23 visit: masks technically should have been worn by everybody going to the event. The mayor, a Democrat, explained her decision to let it go by saying that the idea was to educate the populace, not punish people.

Ducey had ordered many businesses closed and forced schools to take learning online in early March. By mid-May, he began opening things up.

While hospitals used the time to prepare in the case of a crush of cases, Ducey arguably did little to prepare the state for a reopening that was not simply a return to normal. Within days of lifting the orders, bars were packed, large gatherings could be seen in parks and mask use continued to be sporadic.

Ducey acknowledged that in a roundabout way on Monday, saying that the “early message” about the virus was that it largely impacted the elderly. He said it was now clear that it could also harm younger people, particularly those with other health issues.

“You’ve seen a change in tone and direction because of the change and direction from the trajectory of this virus,” he said Monday in response to one of many questions about his changing stance. “We are going to do what is necessary, and I mean whatever is necessary, to protect the lives and livelihoods of Arizonans.”

By early June, just a few weeks after restrictions were lifted, cases began spiking. Arizona has seen its cases go from 13,000 on May 15 to 74,500 on Monday, and deaths from the virus have nearly doubled in the last six weeks. More than 1,500 people have died.

In recent weeks, Ducey has clearly tried to find a middle ground, acknowledging the surging cases while also assuring Arizonans that all was under control and resisting a return to restrictions. He has frequently said the hospitals were well prepared for whatever came while interspersing arguments about personal liberties and the need for the state to stay open for business. He has suggested people wear masks when socially distancing wasn't possible but generally framed it as a matter of personal choice.

The state's decision to tell hospitals on Friday to carry out their crisis care plans was likely a turning point for the governor, said Will Humble, executive director of the Arizona Public Health Association.

If a hospital goes over capacity, it will have to end all non-emergency surgeries and some people may get lower standards of care or be discharged early. Statewide, hospitals were at 84% capacity on Sunday. While officials said Monday it was impossible to know when they may reach 100%, there are no signs that the virus is slowing.