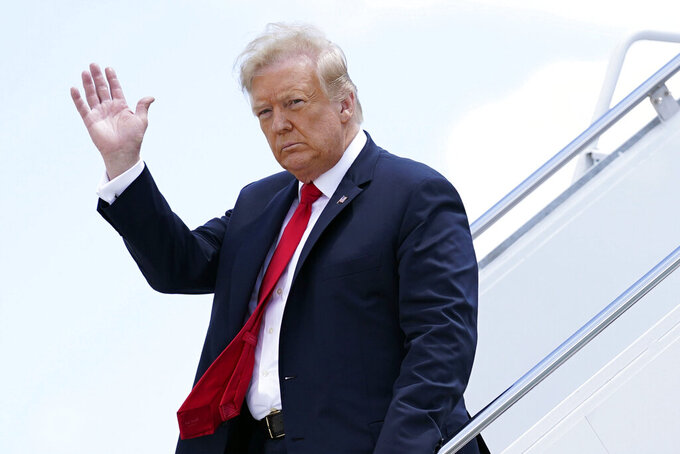 FILE - In this Thursday, June 25, 2020, file photo, President Donald Trump waves as he arrives on Air Force One at Austin Straubel International Airport in Green Bay, Wis. Trump seems to rarely leave a thought unspoken. Of late, though, it is increasingly clear there are things Trump won’t say, and they are tied to the most important issues of his presidency. (AP Photo/Evan Vucci, File)

Of late, though, it is increasingly clear there are things Trump won’t say — and they are tied to the most important issues of his presidency.

None of the above are particularly bold or controversial messages.

Modern American presidents of both parties have often sounded off against Russian aggression. They have amplified the advice of medical experts in public health emergencies like the coronavirus. They have used the bully pulpit of the presidency to ask Americans to summon their better angels in confronting racism.

But such words do not come easily to Trump — and his silence emboldens those who reject these messages and contributes to the cascading crises that now engulf the White House and have put his reelection in peril.

“People now require a serious man with a serious message and don’t feel like they have it,” says Calvin Jillson, a presidential historian at Southern Methodist University.

For his part, Trump has responded to the chaos surrounding the coronavirus pandemic, the unrest over racial injustice and more recent questions about his stance toward Russia by insisting that the “silent majority” of Americans are with him. There are surely those who endorse his sentiments and trust his instincts as Trump plays to his most loyal base supporters.

But revelations this week that the president has long known about allegations that Russia secretly offered bounties to Taliban-linked militants for killing American troops in Afghanistan represent a fresh source of tumult for Trump when he can least afford it.

The president’s tendency to go easy on Russia in his public pronouncements has long been a source of dismay and puzzlement to many in Washington and beyond, perhaps most notably that jaw-dropping moment at a 2018 summit in Helsinki when he sided with Vladimir Putin over U.S. intelligence agencies on the question of whether Russia had interfered in the 2016 U.S. elections.

Now, legislators, diplomats and others are openly questioning why Trump is refusing to speak out clearly against Russian aggression given the latest explosive allegations.

Democratic Rep. Adam Schiff, chairman of the House Intelligence Committee, found it “inexplicable, in light of these very public allegations, that the president hasn’t come before the country and assured the American people that he will get to the bottom of whether Russians are putting a bounty on the heads of American troops.”

The White House stresses that the bounty allegations are unverified. And the president can fairly point to a series of administration actions over the last three years to punish Russia for malign behavior. But Trump’s own words — and lack thereof at key moments — have sent a far more conciliatory message to Moscow.

Trump in recent months has been angling to welcome Russia back into the Group of Seven industrialized nations, which gave Putin the boot after Moscow seized control of Crimea in 2014. And this week, rather than address the substance of the bounty allegations, Trump chose to harangue the media for what he calls fabrications designed to “make Republicans look bad.”

Kathleen Hall Jamieson, director of the Annenberg Public Policy Center at the University of Pennsylvania, thinks Trump's aversion to talking about Russia stems in part from his sensitivity about whether Moscow's interference in the 2016 election helped get him elected.

“He seems to think when Russia is raised, automatically it means someone is going to use it to say that they elected him,” she said.

As for face masks, Trump has bluntly said they’re not for him and that other people can make their own choices. He refuses to wear one in public and has speculated that some people wear masks to show they don’t like him. He's urged people to follow local guidelines, but his own campaign as flouted them.

It all undercuts health officials’ efforts to promote use of a critical weapon in stopping the spread of the coronavirus.

Republican Sen. Lamar Alexander of Tennessee on Tuesday urged Trump to wear a mask even occasionally, predicting the president’s millions of admirers “would follow his lead.”

With virus cases now surging in Sun Belt states and reported U.S. deaths from the virus nearing 130,000, GOP officials are increasingly speaking out about the importance of masks.

Senate Majority Leader Mitch McConnell says there should “no stigma” to wearing one. Utah Gov. Gary Herbert urged Trump and Vice President Mike Pence to issue a national call to wear them.

Those are words that, to many, should have been easy ones for the president to utter long ago.

But Trump shows no signs of budging — no matter that his allies see them as the only way to avoid another economic shutdown, an even worse wave of cases and a GOP election rout. “LONE WARRIOR,” he tweeted on Tuesday.

Lawrence Gostin, a public health expert at Georgetown University, said Trump’s failure to promote mask usage is having devastating consequences in the U.S.

“I have become increasingly convinced if there is one thing that has separated countries that have done well and those that have done really poorly, it’s inconsistent messaging where you’ve lost the confidence of the population," Gostin said.

The coronavirus surge has played out alongside the national reckoning over racial injustice triggered by the death of George Floyd and other Black Americans killed by police. Trump has offered little balm to those confronting the pain of racism.

Jamieson suspects Trump avoids talking about racism because he thinks it “signals that you are sympathetic to the left.”

And so Trump has come down squarely on the side of “law and order,” been quick to defend law enforcement and painted protesters with a broad brush that blurs the distinction between peaceful demonstrators and those doing violence.

Trump has failed to acknowledge systemic racism and suggests instead that there are a few “bad apples” among the police who need to be culled. As for his plan to combat racism, he calls an economic rebound “the greatest thing that can happen for race relations.”

Talk of a big presidential speech to the nation on how the country can come to terms with its racial problems have fallen by the wayside, the White House well aware that such an address would not likely come off well.

Trump has “an inability to perform that critical role as president, as spokesman for the nation in good times or bad but most critically in difficult times,” says Jillson.

The combination of the virus, the racial unrest and economic upheaval, Jillson says, has got Trump supporters reevaluating their past inclination to be mildly amused by the chaos he sows and left them asking: “‘Am I still entertained? Am I still comfortable? Am I still willing to take the uncertainty?”

EDITORS’ NOTE — Nancy Benac is White House news editor and has covered government and politics for The Associated Press for four decades.