Analysis: Whatever, whenever Federer decides, it's up to him 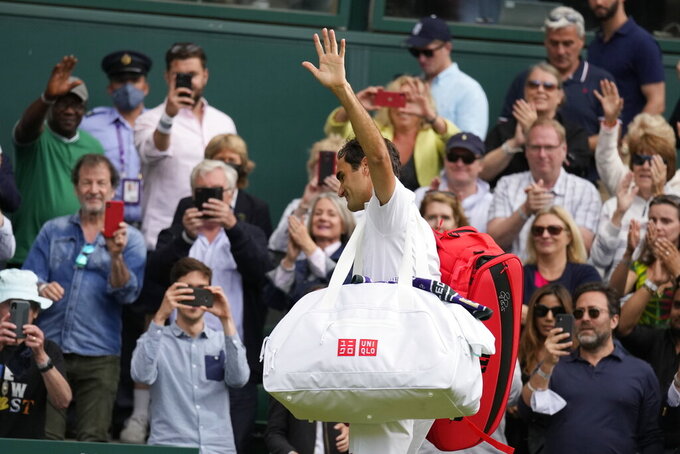 WIMBLEDON, England (AP) — If this really was it for Roger Federer at Wimbledon — and no one knows for sure either way right now, not even the man himself — then both he and his fans should take solace from this:

He will be heading out on his own terms and still at an elite level. Just maybe not the exact terms and level he would prefer, given that he lost in the quarterfinals at the All England Club to someone new to Grand Slam success.

And if this wasn’t it, if Federer does return to the site of eight of his 20 Grand Slam triumphs, then all the better for the sport.

His 40th birthday is a month from Thursday, and what matters the most at the moment is that he make his own choices, for his own reasons, on his own timeline. Well, with input from his coaches, his trainer, his agent, his family and whatever other opinions Federer values.

“Obviously, we’re going to speak a little bit tonight, depending on how I feel, then the next couple of days, as well. Then we go from there. Just see: OK, what do I need to do to get in better shape so I can be more competitive?” Federer said Wednesday night after exiting with a 6-3, 7-6 (4), 6-0 defeat against Hubert Hurkacz of Poland.

“I’m actually very happy I made it as far as I did here — and I actually was able to play Wimbledon at the level that I did, after everything I went through,” Federer said. “Of course, I would like to play it again, but at my age, you’re just never sure what’s around the corner.”

Two years ago, Federer came as close as possible to his ninth trophy at the All England Club and 21st at any major, holding two championship points against Djokovic.

But Federer didn't convert either and ended up on the wrong end of a fifth-set tiebreaker. When he needed two operations on his right knee in 2020, what pushed him through the recovery was a desire to get back to his favorite tournament's grass courts.

“You need a goal when you’re going through rehab with what I did. You can’t think of the entire mountain to climb as once. You’ve got to go in steps. Wimbledon was the initial, first ‘super step,’ if you like,” Federer said. “For me, now that that’s over, you’ve just got to reassess everything.”

Federer chats regularly with his team to figure out next steps. Where he should play. Whether his body needs rest. How he can improve. And so on.

There’s a lot to discuss, including if he'll go to the Tokyo Olympics.

What’s not up for debate, and Federer doesn’t hide it, is that he is not who he used to be. Of course not.

Still, he was good enough to be one of the last eight men standing of the 128 in the Wimbledon bracket.

“Clearly, there’s still a lot of things missing in my game that maybe 10, 15, 20 years ago were very simple and very normal for me to do. Nowadays, they don’t happen naturally anymore. I've got to always put in the extra effort, mentally, to remind myself: Remember to do this or do that,” he said. “I have a lot of ideas on the court, but sometimes I can’t do what I want to do. I think it’s a bit of a tricky situation, sometimes.”

What’s not tricky: We shouldn't judge Federer’s choices about whether to walk away.

His first singles appearance at Wimbledon since 2017 ended with a third-round loss. Afterward, he sounded glum.

Before Wimbledon, Murray was asked about Federer’s contributions to tennis. The answer veered to Federer’s future.

Murray, a three-time major champion, noted people have speculated for years about when Federer might be done.

“I don’t quite understand — because I’ve experienced it myself — just sort of why people want to always ask those question about when someone is going to finish. He’ll do it when he’s ready,” Murray said. “I wish everyone would start, like, encouraging him to keep going and keep playing as long as he can, as long as his body can do it, because we’ll miss him when it’s over.”

Howard Fendrich covers tennis for The Associated Press. Follow him at https://twitter.com/HowardFendrich or write to him at hfendrich@ap.org