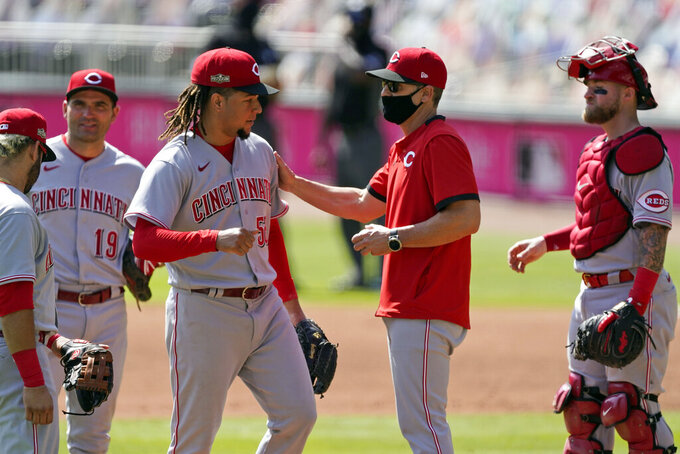 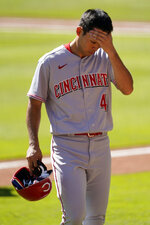 ATLANTA (AP) — It had been so long since the Atlanta Braves won a postseason series, Marcell Ozuna wanted to make sure he captured the moment.

Ian Anderson dazzled in another shutout performance for Atlanta, and the Braves won a playoff series for the first time in almost two decades by sweeping the light-hitting Cincinnati Reds with a 5-0 victory Thursday.

Ronald Acuña Jr. had three hits for the NL East champions, including a run-scoring double in the fifth. After winning Wednesday’s series opener 1-0 in 13 innings, Atlanta broke open Game 2 on two-run homers by Ozuna and Duvall off Raisel Iglesias in the eighth.

Following his drive to left-center, Ozuna paused on his jog down the first-base line to hold up his hand and pretend he was taking a selfie photo.

When Duvall added another shot, Ozuna called him to the end of the dugout for another selfie.

It was definitely a fun day for Ozuna and Co. Not so much for Joey Votto and the Reds.

Anderson struck out nine in six innings as the Braves snapped their record-tying string of losses in 10 consecutive postseason rounds since their last playoff series win in 2001. Atlanta will face Miami or the Chicago Cubs in the NL Division Series in Houston.

“I told them we’re just checking a box off in what we want to get done,” Snitker said.

The 22-year-old Anderson allowed two hits and walked two in his playoff debut after six regular-season starts. Will Smith, Chris Martin and Mark Melancon each threw one perfect inning.

Anderson said it was special to be part of two consecutive shutouts in the series. Max Fried started in the Game 1 win.

“All the credit to Max for going out there yesterday pitch for pitch with (Trevor) Bauer and setting the tone for us,” Anderson said.

Cincinnati wasted a solid performance by Luis Castillo, who struck out seven in 5 1/3 innings in his first postseason start. Bauer struck out 12 in 7 2/3 scoreless innings in Game 1.

The Reds were shut out in consecutive postseason games for the first time. The 22 innings without a run is the longest postseason scoreless streak in franchise history.

“No one feels worse than the guys who put everything they had on the line, and it didn’t work out,” manager David Bell said. "We’ve got to learn from it and find a way to be better from it.”

Atlanta jumped in front in the fifth. With two outs, Austin Riley took off from first base on a pitch Acuña lined into the gap in left center. Riley scored easily and Acuña stood on second base, pumping both fists in the air in celebration.

Cincinnati left 13 runners on base Wednesday, and its scoring frustrations continued.

Anderson’s second walk of the second, to Freddy Galvis, loaded the bases with two outs. Tucker Barnhart’s groundout to second base ended the inning. It was the Reds' best scoring chance.

Reds: C Curt Casali, who normally starts with Castillo, was held out due to a sore wrist before entering the game in the eighth. Barnhart, who has split playing time with Casali, was the starting catcher.

Braves: After sitting out the final two regular-season games with a sore quadriceps, Riley had no setback in the series opener. That doesn’t mean Riley is fully recovered. “I think he’s sore,” Snitker said. “I don’t think this is something that is just going to go away. ... He’s just going to have to manage it."

The Braves had been 0-7 in their last seven potential clinching games in the postseason, including 0-2 in last year's NL division series against St. Louis.

Duvall insisted the Braves had no extra motivation to end any of their postseason droughts.

“Honestly I didn’t feel any extra pressure that we have to win this series,” Duvall said. “The thought is to win every series ... not so much that if we win the next round we’ll be further than we’ve been since ’01 or whatever.”

As soon as the game was over, the grounds crew began preparing the field as if there were more games to be played at Truist Park. As it turns out, there are.

Snitker said the Braves would return to the park on Friday for a simulated game and workouts. The team is in a postseason quarantine in its hotel, so Snitker said players need to get out of their rooms.

Reds: Will play the Cleveland Indians in their 2021 spring training opener on Feb. 27 in Goodyear, Ariz.

Braves: Will face Miami or the Chicago Cubs in Game 1 of the NL division series in Houston on Tuesday.