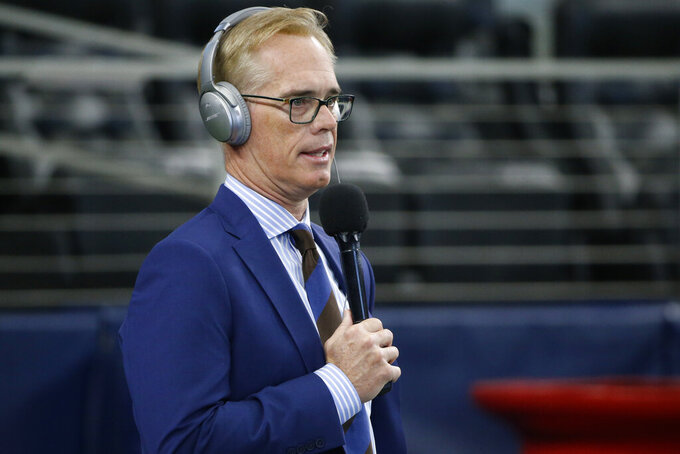 FILE - In this Dec. 15, 2019, file photo, Fox Sports announcer Joe Buck is shown before an NFL football game between the Los Angeles Rams and the Dallas Cowboys in Arlington, Texas. Buck is one of many announcers who has had to trade the press box for a home office. (AP Photo/Michael Ainsworth, File)

Joe Buck has taken up a different type of commentary with games at a standstill.

Instead of setting the scene from the 18th fairway, the Fox announcer can be heard describing a toddler’s short game on social media.

Buck’s “Quarantine Calls” on Twitter are one of many examples of the way broadcasters are keeping busy while monitoring the news and wondering when games will resume.

“Limbo is the worst position to be in. If baseball said June 20 is the new opening day, at least there’s a date to look forward to,” said Buck, who started doing the videos after a conversation with Fox Sports President Eric Shanks about what he was going to do while sports were suspended. “No one really knows, though, and things are fluid as far as containing this virus. We’re all just stuck inside, which is different.”

Buck does have limits on what he will call. He declined a $1 million offer from an adult camming site to offer commentary on 25 live cam shows per week for at least six weeks.

The new coronavirus has caused a global pandemic that has sickened at least 2.2 million and killed over 148,500 worldwide, halted sports and forced restrictions on the movement of millions of people in an effort to stop the virus from spreading further and overwhelming health care systems.

After the NFL draft concludes on April 25, the next live event might not occur until late May, at the earliest.

“At this point the three most followed people might be Dr. (Anthony) Fauci, (NFL draft experts) Mel Kiper and Daniel Jeremiah. People are looking for something to sink their teeth into,” Buck said.

Buck isn’t the only one who has had to trade the press box for a home office. NBC’s Mike Tirico interviewed IOC President Thomas Bach via Skype from his kitchen in Ann Arbor, Michigan, and assisted with a special when the Tokyo Games were postponed until next year.

The hiatus has also allowed some to branch out. Buck started a podcast with actor and longtime friend Oliver Hudson focusing on their perspectives on fatherhood.

Tirico is doing a weekday afternoon talk show on the NBC Sports Network for the first time in 11 years. Tirico used to do his ESPN Radio show from home most of the time, but he has found an appreciation for how technology has allowed many to be able to work from home

“I think it parallels and dovetails with everything going on. We try to find the best way to make it work,” Tirico said. “There’s great value in a newsroom and studio setting, but there is more opportunity to do things remotely and do it as quality television.”

NBC Premier League host Rebecca Lowe has had one of the busier schedules among network hosts with cross-country trips nine months out of the year, but she has not had to worry about filling up her time now. Lowe is anchoring two digital shows from her home in Northern California -- one on the Premier League and another where she answers questions asked on social media.

“When you have a 3-year-old boy there isn’t a lot of down time. It feels so strange not going into work, but I’ve definitely not had issues with boredom,” she said.

Others have devoted their time to assisting others. ESPN’s Dave Pasch is raising money for Phoenix-area families having problems paying bills due to job losses.

Pasch, who would normally be calling NBA games, said it has been good to see people rallying around each other while trying to navigate the crisis.

“It was amazing to see how many people were affected right away,” he said. “Everyone is working through fear, anxiety and stress, but seeing colleagues and strangers coming together and asking how they can help has been overwhelming.”

The ones who may be feeling the effects the most are those who work for regional networks. Unless an announcer or reporter is hired as an employee of the team and network, they are often classified as freelance employees who are paid on a per game basis.

Fox Sports West’s Carrlyn Bathe, who is the Los Angeles Kings rinkside reporter, has been doing intermission interviews when the Kings have had video game simulations. Bathe said since the pandemic shutdown started, she has been in regular contact with other announcers.

“The only certainty I have is that everybody wants to look out for one another. It has been eye-opening in that respect,” she said. “Instead of a text on how the game is going, it is now about how the family is doing. I think that is good and healthy.”

Whenever things do resume, it could be a packed calendar the rest of the year.

“The energy and excitement levels when everything resumes are going to be something to see,” Lowe said.