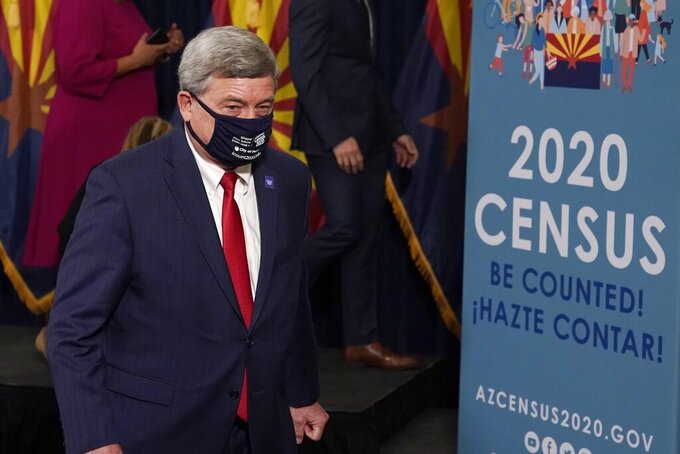 U.S. Census Director Steven Dillingham departs a census news conference to urge Arizonans to participate in the nation's once-a-decade population count Thursday, Sept. 17, 2020, in Phoenix. Ending the 2020 census at the end of September instead of the end of October, could cost Florida and Montana congressional seats and result in Texas, Florida, Arizona, Georgia, and North Carolina losing $500 million in federal funding for healthcare for its neediest residents. (AP Photo/Ross D. Franklin, Pool)

The director of the Census Bureau said Thursday that irregularities have been found during the numbers-crunching phase of the 2020 census, a development that jeopardizes the statistical agency’s ability to meet a year-end deadline for handing in numbers used for divvying up congressional seats.

The Census Bureau already was facing a shortened schedule of two and a half months for processing the data collected during the 2020 census — about half the time originally planned. The Census Bureau would not say Thursday what the anomalies were or publicly state if there would be a new deadline for the apportionment numbers.

“These types of processing anomalies have occurred in past censuses," Census Bureau director Steven Dillingham said in a statement. “I am directing the Census Bureau to utilize all resources available to resolve this as expeditiously as possible. As it has been all along, our goal remains an accurate and statistically sound Census."

The Census Bureau said it would not comment further.

“This is not surprising to me at all," said Robert Santos, president-elect of the American Statistical Association, in an email. “The notion that the 2020 Census data could be processed in half the time scheduled given all the obstacles & challenges that Census Bureau encountered defies logic."

Those challenges included a pandemic, wildfires out West and hurricanes in Gulf Coast states.

Missing the Dec. 31 deadline for turning in the apportionment numbers would be a blow to President Donald Trump's efforts to exclude people in the country illegally from being counted in the numbers used to determine how many congressional seats each state gets and how $1.5 trillion in federal spending is distributed.

Once the president receives the numbers by the Dec. 31 deadline, the president has about a week from the start of the next Congress to transmit them to the House. If the Census Bureau delays turning in the apportionment numbers because of the processing problems, that transfer of the numbers could take place after President-elect Joe Biden takes office.

Trump’s apportionment order has been found unlawful by three courts — in New York, California and Maryland. The Justice Department has appealed to the Supreme Court, which is hearing arguments at the end of the month.

The House Committee on Oversight and Reform, which oversees the Census Bureau, wasn't informed about the irregularities before they became public, said U.S. Rep. Carolyn Maloney, a New York Democrat who chairs the committee.

Maloney demanded information from the bureau about the anomalies, data accuracy and potential delays in the schedule.

However in late July and early August, officials at the Commerce Department, which oversees the Census Bureau, announced field operations would finish at the end of September and the apportionment numbers would stick to a congressionally-mandated deadline of Dec. 31.

A coalition of local governments and advocacy groups sued, claiming a shortened schedule would shortchange minorities and hard-to-count communities. Their lawsuit also said the schedule was shortened to make sure the numbers-crunching took place on the Trump administration's watch so that the president’s order on apportionment could be enforced.

Jeffrey Wice, an adjunct professor at New York Law School who is an expert in census law and redistricting, said he would not be surprised if the president, in his last weeks in office, installs as the bureau's head a political appointee “who will do whatever Trump wants him to do."

In the past year, the Trump administration has named a handful of political appointees to the Census Bureau's leadership team, drawing sharp criticism from Democratic leaders of a House oversight committee and questions about their hiring from the Commerce Department's inspector general.

“That is totally unpredictable," said Wice, who has worked with the national Democratic Party on redistricting programs.