Another blow to Sabres: Eichel out for `foreseeable future' 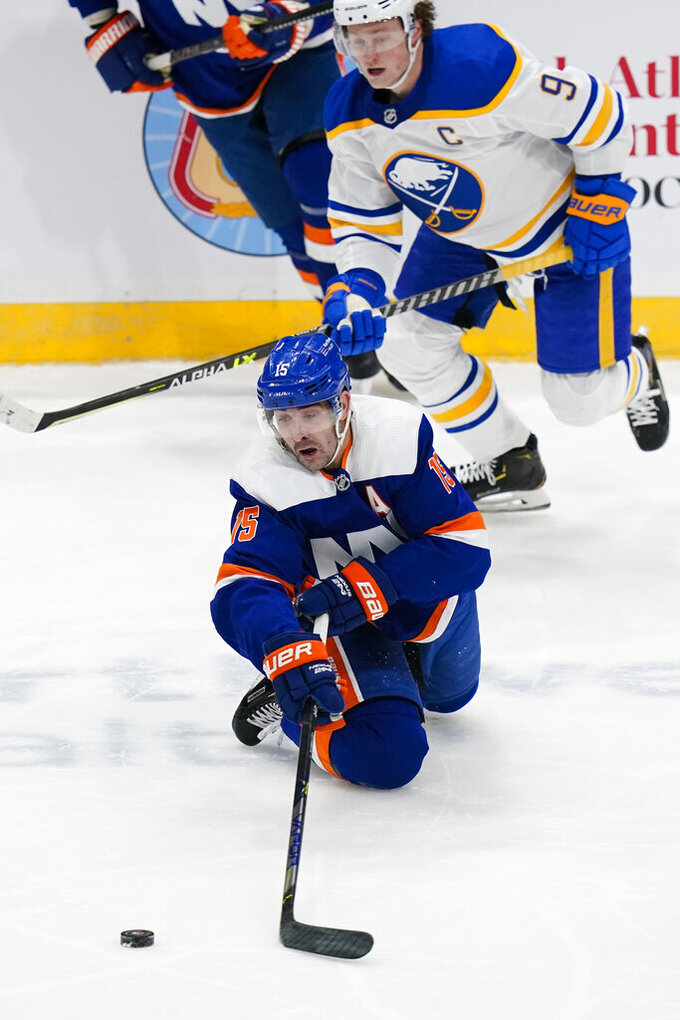 BUFFALO, N.Y. (AP) — The Buffalo Sabres will be without captain Jack Eichel for what coach Ralph Krueger called “the foreseeable future" in delivering yet another blow to a team in the midst of a nine-game skid.

The injury is not considered season-ending, though Krueger on Saturday was unable to provide a fixed timetable on how much time Eichel will miss.

“An injury of this nature needs more assessment and more time to understand it,” he said. “We just know that it will be some time here from shorter all the way to what you’ve already mentioned (season-ending), but it’s somewhere in between that.”

The update came after Eichel traveled to see a specialist over the past two days to further determine the severity of the injury. Under the NHL’s COVID-19 protocol rules, Eichel is required to spend seven days in quarantine as a result of the trip, meaning he will miss at least Buffalo’s next four games.

He has already missed two games since he was checked into the end boards by Casey Cizikas in the closing minutes of a 5-2 loss at the New York Islanders on Sunday. Eichel went to the bench, where he was spotted wincing in pain while flexing his neck.

The Sabres, who host the Pittsburgh Penguins on Saturday night, are in free fall. Buffalo (6-15-4) ranks last in the league in wins and on an 0-7-2 skid, putting the team already in danger of extending its playoff drought to an NHL-record-matching 10th season.

Eichel’s latest injury is separate from the previous two that have severely hampered his production this season.

He missed the first week of training camp after sustaining an upper-body injury during a pre-camp on-ice workout at the Sabres' practice facility.

A person with direct knowledge of what happened told The Associated Press on Saturday that Eichel sustained a rib injury during a workout with Matt Ellis, the team's director of player development.

The person spoke on the condition of anonymity because the nature and cause of the injury had not been disclosed by the team.

A year after scoring a career-best 36 goals in 68 games, the five-time 20-plus goal-scorer has been limited to two goals and 16 assists in 21 games this year. He had not scored in 13 games before being hurt.

Eichel's scoring troubles reflect that of the Sabres, who rank 30th in the 31-team league in averaging 2.24 goals a game, and last in having scored 34 times in five-on-five situations.

His extended absence represents the latest setback to a team that’s lurched from one crisis to another through the first two months of the season, and led to questions regarding Krueger’s job security two years into his job.

Buffalo’s schedule was placed on pause for two weeks after a COVID-19 outbreak struck the team in early February, during which seven players and Krueger were affected. The pause resulted in the Sabres facing a constricted schedule in which they are squeezing in their final 46 games over 83 days.

Injuries have become an issue.

Starting goalie Linus Ullmark is still weeks away from recovering from a lower-body injury last month. And the Sabres are also missing two key defensemen, including Jake McCabe, who sustained a season-ending knee injury last month.

Rookie center Dylan Cozens is the latest to be sidelined. Krueger said Cozens will not play Saturday and is listed day to day with an upper-body injury.

Cozens was hurt while crashing into the boards following a mid-ice check from Pittsburgh’s Zach Anton-Reese early in the third period of a 5-2 loss to the Penguins on Thursday. Cozens had just released the puck and appeared to hit his head while striking the boards.

Cozens has three goals and two assists in 20 games, and had been elevated to playing on Buffalo’s top line in place of Eichel.