Another loss, another injury: Arsenal struggles on PL return 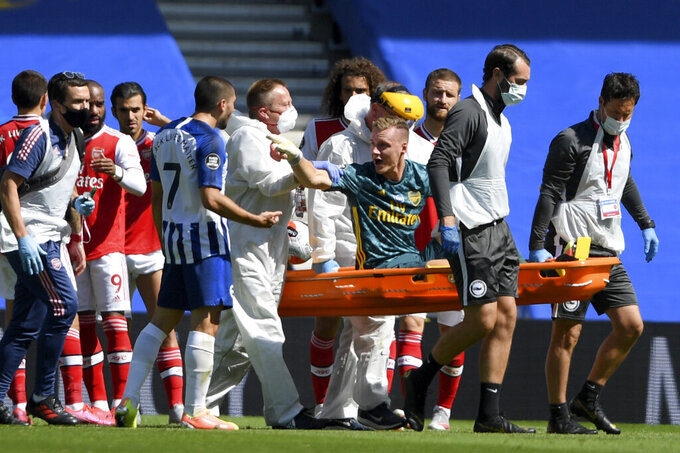 Arsenal's goalkeeper Bernd Leno gestures at Brighton's Neal Maupay as he leaves the pitch on a stretcher after getting injured during the English Premier League soccer match between Brighton & Hove Albion and Arsenal at the AMEX Stadium in Brighton, England, Saturday, June 20, 2020. (Mike Hewitt/Pool via AP)

Another loss. Another big injury. Things are going from bad to worse for Arsenal in the early days of the Premier League’s resumption.

A 2-1 defeat at Brighton on Saturday came only three days after a 3-0 beating by Manchester City, with the demoralizing results robbing Arsenal of the momentum it had before the suspension of the league three months ago because of the coronavirus outbreak.

Qualification for the Champions League looks a long shot now — Arsenal is in 10th place, six points off Manchester United in fifth — and manager Mikel Arteta also has a growing injury list to deal with in this congested period of matches.

Bernd Leno, one of Arsenal’s best players this season, joined that list after landing awkwardly on his right knee after being given a nudge by Brighton striker Neal Maupay in an aerial challenge. Leno’s howls of pain were audible in the empty Amex Stadium and the goalkeeper remonstrated angrily with Maupay while being carried off on a stretcher.

Sure enough, it was the French striker who scored the winning goal in the fifth minute of stoppage time. Arsenal’s players took out their frustrations on Maupay as he celebrated a huge win for Brighton after the final whistle, with fellow Frenchman Matteo Guendouzi grabbing him by the throat in an action that sent Maupay to the ground.

“Some of their players need to learn what is humility, especially one of them,” Maupay said, without mentioning Guendouzi by name. “He was talking all game, he was saying bad things.

“I don’t want to say because I could be in trouble. I just said that this is what happens when you talk too much on the pitch.”

Maupay said, though, he had apologized to Leno and Arteta.

Arsenal’s most likely route into European competition next season might now be through winning the FA Cup, which resumes at the quarterfinal stage next weekend.

Yet Arteta is thinking much longer term after inheriting in December a team that has lost its place among English soccer’s elite in recent years.

“This is the challenge we all have at the football club, to rebuild to something that is worth the club we are representing,” Arteta said.

Leno has a suspected twisted knee, potentially ruling him out of the rest of this pandemic-extended campaign. Arteta lost midfielder Granit Xhaka and defender Pablo Mari to injury against City, with Mari unlikely to return before next season.

Three injuries, two losses, one goal and no points.

It was the third day of games in Project Restart, and it seems the league’s players have already forgotten some of the guidelines put in place to allow soccer to return in England, one of the hardest-hit countries in the outbreak and still a nation reporting dozens if not hundreds of deaths per day.

It must be hard to stick to the advised socially distanced celebrations when your team has scored an important late goal. Brighton’s players swarmed over Maupay after his winner, and the same happened with Watford and Leicester players after their goals in a 1-1 draw at Vicarage Road.

Ben Chilwell was mobbed by his Leicester teammates after smashing home a rising, angled shot off the inside of the post in the 90th minute for what looked like the winning goal.

However, there was more late drama as Watford center back Craig Dawson executed a bicycle kick for a brilliant equalizer in the third minute of stoppage time for his relegation-threatened team. Dawson was also hugged by teammates after a goal that moved Watford a point above the relegation zone.

Leicester restored its eight-point advantage over Man United, which is occupying fifth place — potentially the last Champions League qualification spot this season because of second-place Manchester City’s two-year European ban that is currently under appeal.

Wolverhampton's goals in a 2-0 win at West Ham weren't quite so late, but did come in the second half.

After Raul Jimenez headed home the opening goal in the 73rd for his 14th league goal of the season — a record for Wolves in a single Premier League season — substitute Pedro Neto met a deep cross with a thunderous volley high into the net in the 84th.

Wolves moved tied for points with Man United, with both just two behind fourth-place Chelsea.

West Ham is only out of the relegation zone on goal difference ahead of third-to-last Bournemouth, which lost 2-0 to Crystal Palace after goals by Luka Milivojevic and Jordan Ayew.

Support for the Black Lives Matter movement continued Saturday, with all players from the Premier League teams in action taking a knee after the first whistle of the match. All player names on the back of shirts were again replaced by “Black Lives Matter.”

In the second-tier Championship, which was playing its first games since the restart, Swansea striker Rhian Brewster celebrated the first of his goals in a 3-0 win at Middlesbrough by holding up a shirt with the words “Our Colour Is Not A Crime” written on it.

The shirt was handed to Brewster, a Black striker on loan from Liverpool, by a member of Swansea’s backroom staff after he ran to the dug-out.

West Bromwich Albion drew 0-0 at home to Birmingham and leads the division on goal difference from Leeds, whose game in hand is on Sunday.