Another perfect night by Williams lifts Celtics over Rockets 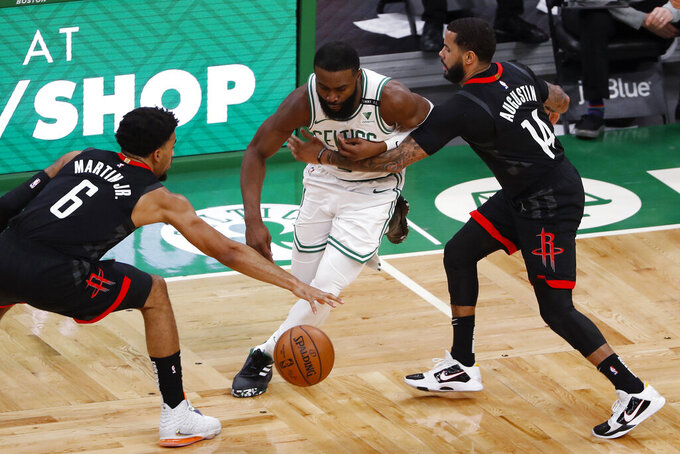 BOSTON (AP) — Something about playing the Houston Rockets brings out the best in Celtics big man Robert Williams.

And it was exactly the spark Boston needed to break out of a recent slump.

Williams had a career-high 20 points, nine rebounds and eight assists, Jayson Tatum scored 26 and the Celtics rolled to a 118-102 win over the Houston Rockets on Friday night.

“I’m learning my spots, learning where I’m going to score," said Williams, who hit all nine of his field goal attempts, marking the second time this month he was perfect from the floor against the Rockets. He had 16 points and 13 rebounds on 7-of-7 shooting in Boston’s 134-107 win at Houston on March 14.

"Obviously, I’m getting way more comfortable with the minutes I play. I feel like if it stays that way I’m just going to be better,” he added.

Fournier had struggled in his first two outings with Boston, going 0 for 10 in a loss to New Orleans and 3 for 6 two nights later in a loss to Dallas. His performance Friday had his teammates jumping wildly on the bench.

“As a new guy when you see your teammates, first of all looking for you on the court, and being happy for you — it means a lot,” Fournier said.

The Rockets stayed close early despite playing their second straight game without John Wall, who continues to deal with a fluid issue in his left knee.

But they couldn’t keep up in the second half, turning it over 12 times on the night, leading to 32 Boston points.

“Their defense was very good tonight and that pace that they play at," Rockets coach Stephen Silas said, “we just kind of got lulled into playing a slow, walkup game.”

Williams was productive on both ends of the floor in his return from a one-game absence for a non-COVID-19 illness. He scored 10 points on 5-for-5 shooting to go along with eight rebounds in the first half as Boston took a 52-44 lead into halftime.

The group worked well together, opening the game 7 of 10 from the field, including 4 for 5 from 3-point range.

The Celtics also had much better ball movement in transition and in the half court, which led to them taking many more of those shots in rhythm. They finished the opening period with 10 assists and had 35 for the game.

One of the best examples of Boston sharing the ball came in the third quarter when Walker corralled a rebound and whipped an outlet pass to Smart at midcourt. Smart — without dribbling — then zipped a pinpoint pass to a streaking Tatum for a one-handed dunk.

Celtics: Had assists on 15 of 21 field goals in the first half. … Romeo Langford (post-health and safety protocol reconditioning), Semi Ojeleye (left side strain) and Tristan Thompson (health and safety protocol) all remained out. Boston coach Brad Stevens said Ojeleye said he doesn’t feel ready but is likely “days, not weeks away” from returning. Stevens said he saw Thompson for the first time in a few weeks and he is starting to ramp up activity.

Williams became the first Celtics player to have at least 20 points, eight rebounds and eight assists while shooting 100% from the field. According to the Elias Sports Bureau, he was the eighth NBA player to do it in the shot clock era and just the fourth since the 2000-01 season.