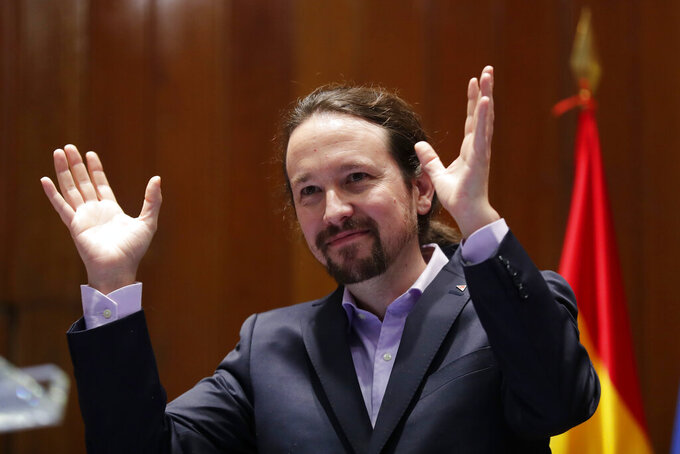 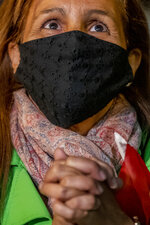 MADRID (AP) — A skeptic of sweeping pandemic lockdowns vowed Wednesday to use her party's strong victory in a regional Madrid election to act as a “counterweight” to the left-wing coalition of Spanish Prime Minister Pedro Sánchez.

Isabel Díaz Ayuso's conservative Popular Party, ousted from the national government in mid-2018 amid a series of corruption scandals, on Tuesday came close to obtaining an absolute majority in the wealthy region's legislative assembly.

The election result opened a fresh chapter in Spain's volatile politics by putting conservatives back in the race to take the national power back from Sánchez's Socialists and United We Can, an anti-austerity party.

The win “is going to be a stimulus and a change of cycle," Díaz Ayuso told Spanish station EsRadio the day after the Popular Party won 44% of the vote in the regional election, more than the total secured by all of its center-to-left rivals.

“We will continue here being the counterweight and the counterpower that are needed (against Sánchez)," said Díaz Ayuso, whose solid victory reduces the need for her to form a coalition government with Vox, the far-right party that has already offered the regional chief its support.

By allowing bars, restaurants and shops to stay open even with virus infections at dangerous levels, Díaz Ayuso tried to keep Madrid’s economy afloat. Amid growing pandemic fatigue, this boosted the popularity of the 42-year-old, who started out from the political fringes. Her blunt style has also won her broad sympathy among far-right supporters and, judging by her ballot results, also from former Socialist voters.

All eyes were set Wednesday on what course the conservatives would take nationally as they try to leave behind their corruption-stained past. Internal divisions have grown within the Popular Party, between those who want to follow a relentless ideological battle against the progressive camp by recovering support that has gone to the far-right — as Díaz Ayuso has succeeded in doing — and party apparatchiks who want to stay closer to the political center.

“Freedom has won today in Madrid but tomorrow it will win in all Spain,” he said.

José Luis Ayllón, a former Popular Party lawmaker turned political analyst at the LLYC communications consultancy firm, said the conservative party “needs to read the results in national terms, but also taking into account that what works in Madrid might need to be adapted in a country that is very diverse.”

The left had bet on a high turnout, especially in working-class neighborhoods in the suburbs of the Spanish capital, but ultimately failed to add up enough votes to end 26 consecutive years of conservatives in power.

Pablo Iglesias, the far-left's charismatic ponytailed leader, announced his retirement from politics as soon as results were announced, ending a meteoric political career. Iglesias turned massive street protests over austerity measures into a defiant political movement in 2014 that eventually became the United We Can platform, which last year became part of Spain's first coalition government.

Interpreting the results as a referendum between “two models of a country” in a front-page editorial, the conservative El Mundo newspaper celebrated the results as “a massive approval of the policies led by Isabel Díaz Ayuso under the scourge of the pandemic.”

“The vote boosts a shift to the right of the conservative center of gravity and gives new energy to the collision of poles that is shaking Spain," El País added.

Sánchez's Socialists were dealt a blow with the worst results in the region in four decades of democratic rule. But prominent party members tried to argue Wednesday that the powerful region's political dynamics can't be extrapolated to the national politics.

Sánchez's no. 2, Deputy Prime Minister Carmen Calvo, said that the results in Madrid didn't shake the stability of the coalition with United We Can at a time when the country wants to boost vaccine rollout and speed up economic recovery with the first batch of 140 billion euros ($168 billion) in European recovery funds.

The new regional president will face the daunting task of putting Madrid, which accounts for one-fifth of the country's output, back on its feet. She has vowed to lower taxes to attract more investment, and to safeguard private businesses in key areas such as health and education, which the left opposition wants to see largely managed publicly.

Barring any surprise, her policies will be examined again in 18 months, when Madrid heads again to the polls.

Iain Sullivan and Alicia León in Madrid contributed to this report.