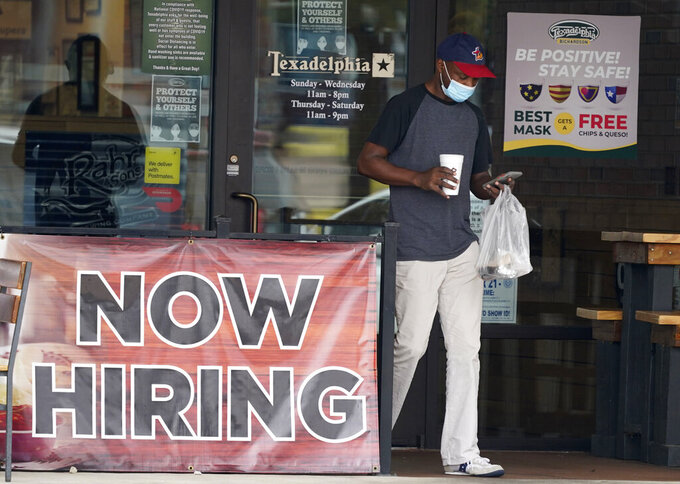 A customer wears a mask and looks at their cell phone as they carry their order past a now hiring sign at an eatery in Richardson, Texas, Wednesday, Sept. 2, 2020. The U.S. unemployment rate fell sharply in August to 8.4%  from 10.2% even as hiring slowed in August as employers added the fewest jobs since the pandemic began. (AP Photo/LM Otero)

WASHINGTON (AP) — By some measures, the shrunken U.S. job market continued a solid recovery last month, with many employers recalling workers who had been temporarily laid off when the coronavirus erupted in the spring.

The economy added nearly 1.4 million jobs in August, and the unemployment rate sank to 8.4% from 10.2% in July. Those improvements came despite a summertime surge in confirmed COVID-19 cases and the failure of Congress to pass another rescue aid package that most economists say is essential to sustain any recovery.

Yet hiring slowed for a second straight month. The August job gain was also the smallest in four months. And Friday’s jobs report suggested that many of the springtime job cuts have become permanent.

Here are five takeaways from the August jobs report:

As the pandemic slammed the United States in March and April, employers slashed 22 million jobs. Since then, the job market has been gradually bouncing back. From May through August, it's added 10.6 million positions. That's a robust gain. But it equals not even half the jobs that vanished in the springtime collapse. To take one example, factories now employ 720,000 fewer workers than they did in February.

“There obviously remains a lot of work to be done to return the labor market to a semblance of health,’’ said Sophia Koropeckyj, a managing director at Moody’s Analytics. “If the labor market were to generate jobs at the August rate, it would take 8.5 months to get back to the pre-pandemic level.

“And that is a big if, since we expect that pace of recovery to slow in coming months as the U.S. grapples with the containment of the spread of the virus in the absence of a widely available vaccine for COVID-19.’’

THE EASY PART IS OVER

Much of the job growth in August — and since May — comes from employers recalling workers they had laid off when the viral outbreak forced them to either curb operations or close down entirely. As businesses have begun to reopen, the number of Americans on temporary layoff has dropped sharply, from 18.1 million in April to 6.2 million in August. Last month alone, the number fell by 3.1 million.

But lots of jobs aren’t coming back. The number of people who are considered permanently laid off has risen from 1.3 million in February to 3.4 million in August. As a result, the number of Americans who have been without a job for at least six months has grown for four straight months. The figure reached 1.6 million in August even though the overall number of unemployed people dropped.

“The recovery has been rapid, but this is still the easy part of it — with the harder part ahead,’’ Jason Furman, a professor at Harvard Kennedy School who was chief economic adviser in the Obama White House, wrote on Twitter. “Recalling people from layoff is easier than creating new jobs.’’

The unemployment rate dropped for all races in August. But white Americans, as always, enjoyed much lower joblessness than Black and Hispanic workers.

One million more Hispanics reported having jobs in August, a 4% increase from July. Hispanics are disproportionately likely to work in the kinds of services jobs — at restaurants or construction sites, for example — that have been returning as businesses reopen. The unemployment rate for Hispanics tumbled to 10.5% from 12.9% in July

In August, the federal government brought on 238,000 temporary Census workers. That burst of hiring drove up the number of government workers at all levels — federal, state and local — by 344,000. It was the sharpest such monthly gain since May 2010.

By contrast, hiring by companies in the private sector has decelerated, to 1 million added jobs last month from 1.5 million in July and 4.7 million in June.

And the private companies that are now hiring tend to be those, like banks and retail stores, that provide services, rather than goods-producing employers like manufacturers, which tend to pay higher wages. Goods-producing companies had accounted for 21% of added jobs in May and 10% in June. In July and August, they represented just 4%.

A TALE OF TWO SURVEYS

Last month’s 1.4 million added jobs were about what economists had expected. The gain marked the continuation of a worrisome slowdown in the pace of hiring from 2.7 million in May, 4.8 million in June and 1.7 million in July.

But the big drop in the unemployment rate was a pleasant surprise.

The disparity between comparatively weak hiring and a steep drop in unemployment reflects how the government compiles its monthly jobs report.

The Labor Department conducts one survey to determine how many jobs were added and another to determine the unemployment rate. The two reports sometimes tell different stories, though the differences tend to even out over time.

For its payroll survey, which tracks added jobs, the department asks mostly large companies and government agencies how many people they employed.

Unlike the payroll survey, the household survey counts farm workers, the self-employed and people who work for new companies. It also does a better job of capturing small-business hiring.

But the results of the household survey are likely less precise. The Labor Department surveys just 60,000 households. By contrast, it surveys 145,000 businesses and government agencies for the payroll survey.

In August, the household survey was a blockbuster: Compared with July, 3.8 million more people had jobs. The number of unemployed plummeted by 2.8 million.

Hold the applause, warns Ian Shepherdson, chief economist at Pantheon Macroeconomics. In a research report, Shepherdson noted that the household survey “is both more volatile and much less reliable than the payroll numbers. Household employment does not lead payrolls; rather, it tends to oscillate around the payroll trend.’’

Given that the household employment gains have outpaced payrolls since April, Shepherdson wrote, they “could easily fall outright in September’’ to move more in line with the payroll survey.