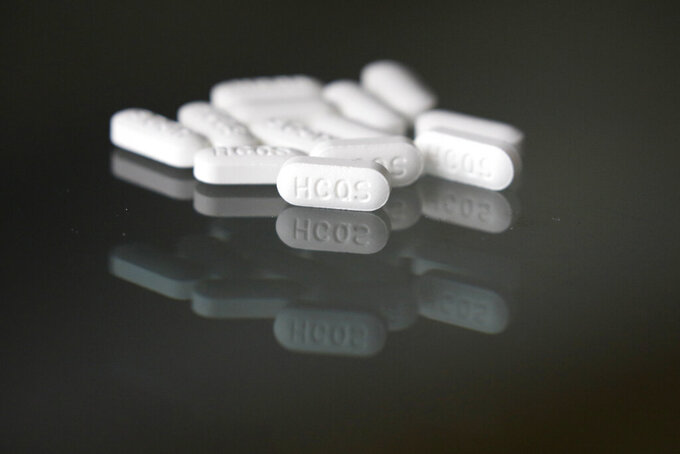 WASHINGTON (AP) — When President Donald Trump doesn't like the message, he shoots the messenger.

So it was this past week when he took very personally a scientific study that should give pause to anyone thinking of following Trump's lead and ingesting a potentially risky drug for the coronavirus. He branded the study's researchers, financed in part by his own administration, his “enemy.”

Heading into Memorial Day weekend, Trump then exaggerated some of his accomplishments for veterans' health care.

A look at recent rhetoric and reality as the pandemic's death toll approached 100,000 in the U.S.:

TRUMP, on why he considers hydroxychloroquine safe for the treatment of COVID-19: “I’ve received a lot of positive letters and it seems to have an impact. And maybe it does; maybe it doesn’t. But if it doesn’t, you’re not going to get sick or die. This is a pill that’s been used for a long time — for 30, 40 years on the malaria and on lupus too, and even on arthritis, I guess, from what I understand.” — remarks Monday.

THE FACTS: He’s wrong to assert there is no risk of harm if people take the malaria drug to try to prevent a coronavirus infection. Trump’s own health agencies have cautioned that taking hydroxychloroquine to stave off the virus could be dangerous due to side effects. If the president is to be believed, he's taking the drug himself.

Trump repeatedly has pushed hydroxychloroquine, with or without the antibiotic azithromycin. No large, rigorous studies have found them safe or effective for COVID-19, and they can cause heart rhythm problems and other serious side effects. The Food and Drug Administration has warned against the drug combination and said hydroxychloroquine should only be used for the coronavirus in hospitals and research settings.

Two large observational studies, each involving about 1,400 patients in New York, recently found no benefit from hydroxychloroquine. Two new ones in the journal BMJ, one by French researchers and the other from China, reached the same conclusion.

On Friday, a study published by the journal Lancet suggested that hydroxychloroquine or chloroquine, with or without an antibiotic, did not help hospitalized patients and was tied to a greater risk of death or heart rhythm problems. Although it was observational rather than a rigorous test, it’s by far the largest so far to examine these drugs in real-world settings — nearly 100,000 patients in 671 hospitals on six continents. Researchers estimated that the death rate attributable to use of the drugs, with or without an antibiotic such as azithromycin, is roughly 13% versus 9% for patients not taking them.

The drug has been available for decades to treat the mosquito-borne illness malaria; it is also prescribed for some lupus and arthritis patients.

Technically, doctors can already prescribe the drug to patients with COVID-19, a practice known as off-label prescribing. But that is not the same as the FDA approving the drug specifically for the pandemic, which would mean it had met the agency’s standards for safety and effectiveness.

FDA regulators issued a warning alert last month in part based on increased reports of dangerous side effects called in to U.S. poison control centers.

TRUMP: “The only negative I’ve heard was the study where they gave it — was it the VA? With, you know, people that aren’t big Trump fans gave it ...they had a report come out.” — remarks Monday.

TRUMP: “It was given by, obviously, not friends of the administration.” — remarks Tuesday at Cabinet meeting.

TRUMP: “And if you look at the one survey, the only bad survey, they were giving it to people that were in very bad shape. They were very old, almost dead. It was a ‘Trump enemy statement.'” — remarks Tuesday after GOP policy lunch.

THE FACTS: There’s no evidence of a political plot at the Department of Veterans Affairs or elsewhere to produce a study pointing to poor outcomes for veterans who took hydroxychloroquine for COVID-19 in a bid to make Trump look bad. That study was led by independent researchers — at the University of Virginia and University of South Carolina — and grants from the National Institutes of Health and the Virginia school paid for the work.

The study released last month found no benefit from hydroxychloroquine.

The analysis, conducted by the researchers with VA approval, was not a rigorous experiment, nor was it peer-reviewed. Still, with 368 patients, it was the largest look at hydroxychloroquine for COVID-19 at the time. Researchers stressed a “great and immediate need” to conduct the analysis due to limited scientific evidence on the drug's safety and “increasingly widespread use" both as a way to prevent COVID-19 and to treat it.

Researchers analyzed medical records of male veterans hospitalized with confirmed coronavirus infection at VA medical centers who died or were discharged by April 11. About 28% of veterans who were given hydroxychloroquine plus usual care died, versus 11% of those getting routine care alone.

“These findings highlight the importance of awaiting the results of ongoing prospective, randomized, controlled studies before widespread adoption of these drugs,” the researchers wrote.

It’s also a point that Dr. Anthony Fauci, the nation’s top infectious diseases expert and a member of the White House coronavirus task force, has repeatedly made, urging caution on the drug.

"Although there is anecdotal evidence that hydroxychloroquine and azithromycin may benefit people with COVID-19, we need solid data,” Fauci said.

No drug has been approved for treating the disease, although several have “emergency use” authorization. Most people who get COVID-19 recover.

TRUMP: “There was a false study done where they gave it to very sick people — extremely sick people, people that were ready to die. ... And the study came out. The people were ready to die. Everybody was old, had bad problems with hearts, diabetes, and everything else you can imagine.” — remarks Tuesday at Cabinet meeting.

VA SECRETARY ROBERT WILKIE: “They did not even look at what the president just mentioned — the various comorbidities that the patients who were referenced in that study had.” — Cabinet meeting Tuesday.

WILKIE: “The analysis did not adjust for patients’ clinical status.” — letter on April 29 to veterans’ groups.

THE FACTS: Trump and his VA secretary are incorrect. Researchers did use standard statistical methods to adjust for differences in the groups being compared, including clinical status and the presence of other chronic health conditions. They did not cherry-pick only the oldest or sickest ones who took the drug.

Even though the VA hospital patients given the drug tended to be sicker than those in the comparison group, researchers still saw no benefit from the drug after taking that into account.

The study included all VA patients treated with the drug. One of the measurements was whether it helped prevent the need for breathing machines. It didn't.

Researchers did not track side effects, but noted there was hints hydroxychloroquine might have damaged other organs. The drug has long been known to have potentially serious side effects such as altering the heartbeat in a way that could lead to sudden death.

The study noted that the median age of the test group was over 65, meaning half the patients were below that and half above it.

The NIH and others have more rigorous tests underway.

HOUSE SPEAKER NANCY PELOSI, D-Calif., on Trump's statement that he's taking hydroxychloroquine: “He’s our president and I would rather he not be taking something that has not been approved by the scientists, especially in his age group and in his, shall we say, weight group — morbidly obese, they say.” — interview Tuesday on CNN.

THE FACTS: Trump is not "morbidly” obese.

Trump is 73. At his last full checkup in February 2019 he passed the official threshold for being considered obese, with a body mass index of 30.4. According to the Centers for Disease Control and Prevention, an index of 40 or above is considered “severe” obesity, which some also call “morbid” obesity.

Pelosi's statement was not purely or even primarily an expression of concern about the president's health. She said later she was giving him “a dose of his own medicine” for his history of putting down women for their weight.

TRUMP: “We’ve done the greatest job maybe of anything in the VA, because I got VA Choice ... approved." — remarks Monday.

TRUMP: “You know we got the Veterans Choice." — remarks Friday at veterans' event.

THE FACTS: False. He didn’t get Veterans Choice approved; President Barack Obama did in 2014. Trump expanded it, under a 2018 law known as the MISSION Act.

TRUMP: “Choice is when they wait for two months to see a doctor ... they go outside, they get themselves a good doctor, we pay the bill, and they get taken care of.” — remarks Friday at veterans' event.

THE FACTS: His suggestion that veterans no longer have waits for care because of the Choice program is also false.

Since March, the VA actually has halted the program’s key provisions that granted veterans the option to see private doctors if they endured long delays at VA, citing the pandemic. Internal VA emails obtained by The Associated Press reveal that some veterans are being turned away, even when private doctors are available to see them.

The program allows veterans to see a private doctor for primary or mental health care if their VA wait is 20 days (28 for specialty care) or their drive to a VA facility is 30 minutes or more.

But since the program’s expansion in June 2018, the VA has not seen a major increase in veterans seeking private care. Two months ago, after the coronavirus outbreak, the VA also took the step of restricting veterans’ access to private doctors, citing the added risks of infection and limited capacity at private hospitals.

Under the temporary guidelines, the VA is reviewing referrals for nonemergency care “on a case-by-case basis for immediate clinical need and with regard to the safety of the veteran when being seen in-person, regardless of wait time or drive time eligibility,” according to VA spokeswoman Christina Noel. The department has boosted telehealth appointments and says VA referrals for private care will be made where it is “deemed safe” and private doctors are available.

“We have community facilities open and able to see patients; however, our Veterans are being denied community care granted under criteria of the MISSION Act,” one VA employee wrote in a May 14 email to Tammy Czarnecki, an assistant deputy undersecretary for health operations at VA.

The employee works in a rural region that covers Montana, Wyoming, Utah, Colorado and Oklahoma, where private doctors are often key to filling gaps in VA care. The person said veterans were being told by their local VAs they may need to wait “well past July, August or September” for private care, according to the email, which was provided to the AP on condition the sender not be identified.

Czarnecki’s office replied by referring the employee to the VA guidance that set forth the restrictions due to a pandemic.

The VA on Thursday said referrals had increased in the employee’s city during the pandemic. It did not provide figures.

The VA, which announced this past week it would start returning to more normal operations, hasn’t said when it will remove its temporary restrictions on Choice.