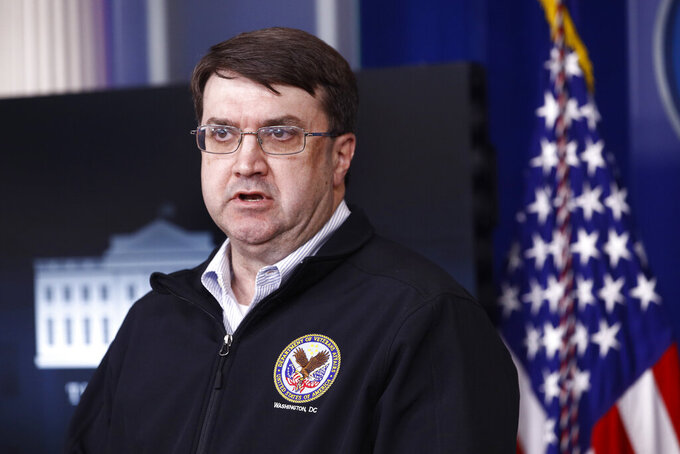 WASHINGTON (AP) — Veterans Affairs Secretary Robert Wilkie is taking advocacy of an unproven drug for the coronavirus even farther than President Donald Trump, claiming without evidence that it's safe and that it has been effective for young and middle-aged veterans in particular.

On Friday, the U.S. Food and Drug Administration issued an alert warning doctors against prescribing the drug for COVID-19 outside of hospitals and research settings because of the risks of serious side effects and death.

A look at Wilkie's claims earlier in the week:

WILKIE, on a nationwide study finding that a malaria drug had no benefit for treating COVID-19 among veterans: “That’s an observational study. It’s not a clinical study. It was done on a small number of veterans. Sadly, those of whom were in the last stages of life. And the drug was given to them. And I have to also say that the drug — we know the drug has been working on middle-age and younger veterans ... working in stopping the progression of the disease.” — interview Wednesday on MSNBC.

THE FACTS: He mischaracterized the study's findings as he delved into an area of speculation by amateurs that his own agency has called “inaccurate and irresponsible."

Wilkie rejected a study that relies on his department’s own hospital data and finds no benefit from hydroxychloroquine. His claim that it helps younger or middle-aged veterans with COVID-19 is also unsubstantiated.

It’s true that the study, done by independent researchers at two universities with VA approval, was not a rigorous experiment. Yet with 368 patients, it’s the largest look so far at hydroxychloroquine for COVID-19, based on VA hospital data.

About 28% who were given hydroxychloroquine plus usual care died, versus 11% of those getting routine care alone.

Even though people given the drug tended to be sicker than the comparison group, researchers statistically adjusted for that and still saw no benefit from the drug.

There is no other published evidence that the drug is safe or effective for younger veterans with COVID-19.

WILKIE, asked whether it’s safe to encourage people to take hydroxychloroquine for COVID-19 treatment: “Oh, I think so.” — interview Wednesday on MSNBC.

THE FACTS: That’s not what the government’s top health experts have said for weeks, nor what his own agency has suggested. The new FDA alert further underscores why the drug cannot be considered generally safe in this pandemic and why it has not been approved by the FDA for treatment of COVID-19.

Last month, the FDA authorized emergency use of the malaria drugs for hospitalized patients with COVID-19 who aren’t enrolled in ongoing clinical trials. But regulators said they are investigating life-threatening side effects reported to poison control centers and other health authorities.

In one such report, doctors at a New York hospital said that heart rhythm abnormalities developed in most of the 84 coronavirus patients treated with hydroxychloroquine and the antibiotic azithromycin, a combination Trump has promoted as part of his persistent and inaccurate portrayal of the malaria drug as a game-changer.

The drug has long been used to treat malaria, rheumatoid arthritis and lupus. A few, very small preliminary studies suggested it might help prevent the coronavirus from entering cells and possibly help patients clear the virus sooner.

Wilkie, as VA secretary, leads the nation’s largest health system. His agency's own health care arm has criticized premature assessments on the effectiveness of the drug for the coronavirus. In an unsigned response to an audit report last month examining whether the VA had adequate stocks of the drug, top VA health officials called it “inaccurate and irresponsible” to assume hydroxychloroquine would benefit veterans for COVID-19.

“There are active investigations into these drugs and many others, as discussed by Dr. Anthony Fauci," according to the unsigned VA response to the agency’s inspector general. “Yet no conclusions have been made on their effectiveness. To insist that a 14 days’ supply of these drugs is appropriate or not appropriate displays this dangerous lack of expertise on COVID-19 and Pandemic response.”