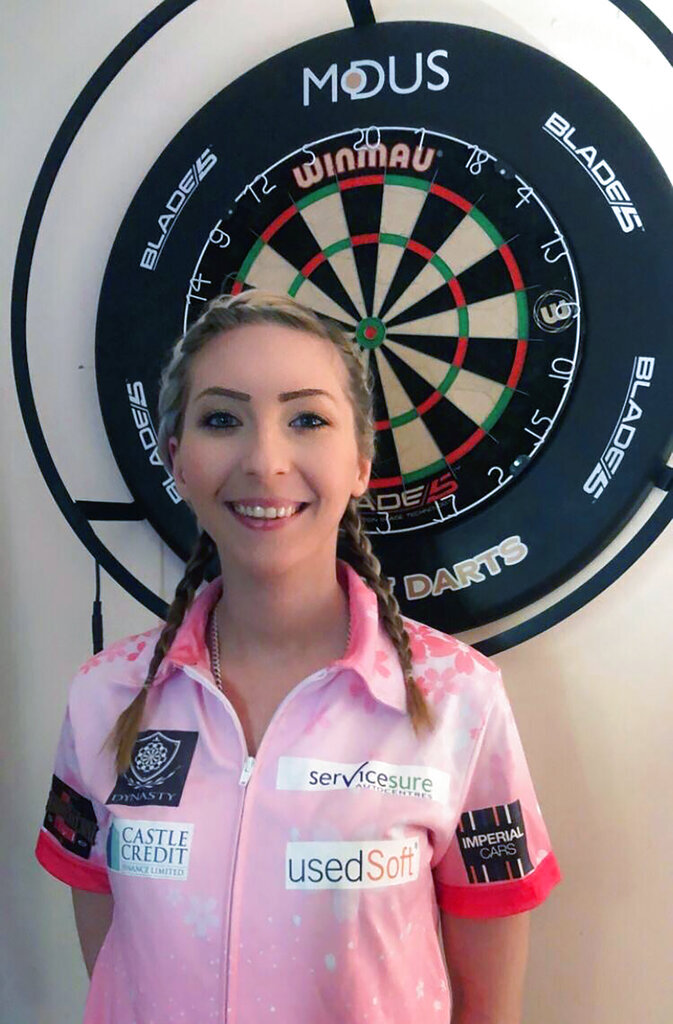 Britain's premier female darts player Fallon Sherrock poses for a photo in Milton Keynes, England, Friday April 24, 2020. Sherrock became the first woman to beat a man at the darts world championship late last year, breaking down barriers in a game that is usually considered to be a man's domain. It proved to be a life-changing experience and although she is now on lockdown because of the coronavirus she will regularly play in future men's events, Sherrock tells The Associated Press Friday April 24, 2020. (Sue Sherrock via AP)

Fallon Sherrock is casting her mind back four months, to a time when the world was a very different place, when sporting venues were full, and when she was briefly the talk of Britain.

She had become the first woman to beat a man at darts’ flagship world championship — in fact, she would do so twice — and her phone was flashing non-stop with messages of congratulations and support from around the world.

Among them was an Instagram post from Sarah Jessica Parker, the “Sex and the City” actress with 6.2 million followers on social media, who wrote: “Making history and our hearts stop as we watched in astonishment and awe. A household of fans and admirers send their congratulations.”

That was “absolutely mental,” Sherrock recalled, but the biggest “wow” moment was when she was messaged by tennis great Billie Jean King.

“I mean, she is one of the biggest people there is for women in sport. To get someone like that tweeting me, that was incredible,” Sherrock said.

Indeed, she was planning to meet up with tennis’ female pioneer in New York in June. That was before the world was brought to a screeching halt by the coronavirus pandemic.

“I hope she remembers me next year,” Sherrock said, laughing.

The way her career is trending, that shouldn’t be an issue.

Easily recognizable with her now-trademark pink top, her long and blonde hair and for regularly sipping water between throws to regulate an ongoing kidney problem, Sherrock is standing out in the darts world. It is helping to shatter the widely held image of darts being a beer-fueled pub game typically played by out-of-shape men.

Online haters lurk — a woman has no place competing with men, the misogynists claim — but Sherrock is now firmly ensconced in the men’s game, even a leading name on promotional literature, following her exploits at London's Alexandra Palace late last year.

Invitations have poured in for the “Queen of the Palace” for men’s tournaments and exhibitions around the world. From Germany and the Netherlands to Australia, New Zealand and New York, where she would have competed in the high-profile World Series of Darts event at Madison Square Garden — and met King. Sherrock partnered Luca Toni, the former Italy soccer striker, in an event in Bonn, Germany, in January.

Money, she says, is no longer a problem.

It’s a far cry from her life this time last year, when she was “sitting at home every day” and worrying about how she was going to pay the rent.

“I was going to ladies competitions but that was at weekends, two or three a month,” Sherrock, who worked as a mobile hairdresser as a teenager, told The Associated Press in a phone interview. “That was about it. I’d be literally at home, looking after my boy and doing the odd practice. That was my life.

The outbreak of the virus, then, has given Sherrock her old life back to some extent. Currently, she is juggling practice in the living room of her house in Milton Keynes, north of London, with looking after her 6-year-old son, Rory, who is being encouraged by his mother to play the game to help his counting for when he goes to school.

The hiatus has also allowed her to take stock of a wild last few months when she became something of a trailblazer.

“I’m proud of myself that I’m inspiring more people to pick up darts, but I don’t think it’s hit me yet,” Sherrock said of her new-found status, including being recognized in local shops.

“I proved women can be as good as men. And there’s loads of other women who, given the opportunity, could beat them. In five years’ time, our consistency is going to be 10 times better than what it is now. Who’s to say a woman can’t maybe win (the world championship)?”

The raucous, party backdrop for darts tournaments on TV could make for a daunting atmosphere for anyone not used to such an environment.

Sherrock, who only threw a dart for the first time at the age of 17, reveled in it at the world championships when she beat Ted Evetts and 11th-seeded Mensur Suljovic, who were occasionally being jeered as they took their throws.

And she believes darts' leadership is thinking of ways to make the atmosphere such that women “feel more welcome and can properly join in.”

There are no longer walk-on girls to accompany players to the oche for matches. There are now female scoring officials and announcers. Since 2018, two places in the 96-person field for the world championship are guaranteed for female players (previously they had to go through qualification).

“I am hoping we get more opportunities and that there are more spaces available,” Sherrock said, “because people are looking at the women’s game and thinking, ‘You know what, they can compete.’”

Certainly, Sherrock has shown she can compete. And she believes she is improving the more she plays with the men, through her consistency, her stamina and her three-dart average that is now constantly in the 90s.

It’s safe to say the world hasn’t seen or heard the last of Fallon Sherrock.