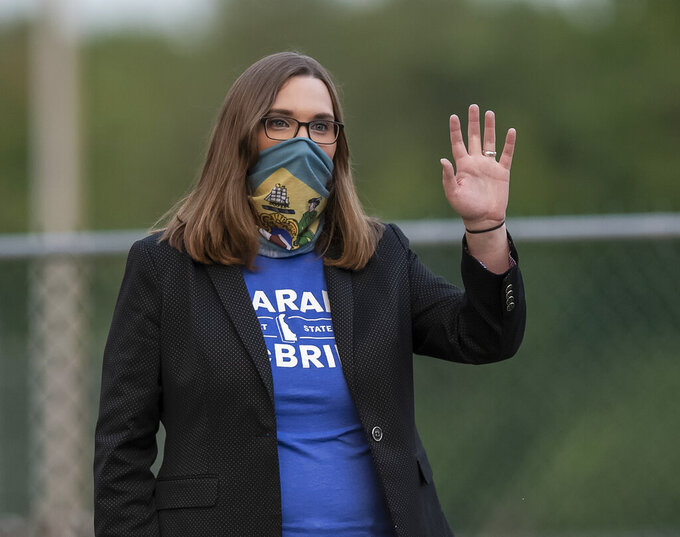 FILE - In this Tuesday, Sept. 15, 2020 file photo, transgender activist Sarah McBride, who hopes to win a seat in the Delaware Senate, campaigns at the Claymont Boys & Girls Club in Claymont, Del. McBride, who has long-standing ties to Delaware’s best-known political family, says, “I am very aware of the stark contrast between the president we could have (Biden) and the president we now have. ... There has never been a moment in the fight for trans equality with such potential and at the same time such risk.” (AP Photo/Jason Minto)

DOVER, Del. (AP) — This year’s general election in Delaware was like none ever seen in the state before. Tens of thousands Delawareans took advantage of a universal voting-by-mail law authorized under emergency powers invoked by the Democrat-controlled legislature because of the coronavirus. Also for the first time, Delaware’s own Joe Biden was the Democratic Party’s nominee for president.

Here’s a look at some of the highlights of the Nov. 3 election in Delaware:

Biden defeated Republican President Donald Trump to win Delaware’s three electoral votes in a state where Democrats enjoy a huge advantage in voter registration numbers over Republicans. Biden spent considerable time this year campaigning virtually while holed up at his home in Greenville because of the coronavirus. Trump never visited the state. In 2016, Trump did hold a campaign rally in Delaware but lost to Democrat Hillary Clinton by more than 50,000 votes. Biden was finally on the general election presidential ballot in Delaware after ill-fated attempts to win his party’s nomination in the 1988 and 2008 campaigns.

Democrats maintained their hold on all three seats in Delaware’s congressional delegation by fending off Republican challengers to U.S. Sen. Chris Coons and Rep. Lisa Blunt Rochester. Coons has held office since 2010 was challenged by conservative activist and political newcomer Lauren Witzke. Witzke has campaigned on an “America First” platform that includes a 10-year moratorium on immigration. But her campaign positions often were overshadowed by remarks that drew criticism from both Democrats and fellow Republicans. They included online posts celebrating the death of Supreme Court Justice Ruth Bader Ginsburg and defending the neo-fascist Proud Boys. Blunt Rochester is the first woman and first person of color to represent Delaware in Congress. She won a third term in the House by defeating Republican Lee Murphy. Murphy is a part-time actor and retired Amtrak conductor who lost a GOP primary for Delaware’s lone House seat two years ago.

Democrat John Carney won a second term as Delaware’s governor on Tuesday, stifling Republican hopes of attracting enough independent voters and disaffected Democrats to unseat him. Carney’s Republican challenger, attorney Julianne Murray, had said this year’s election was partly a referendum on Carney’s handling of the coronavirus. Business closures and restrictions that he ordered in response to the virus outbreak resulted in thousands of Delawareans losing their jobs and filing unemployment claims in record-shattering numbers. Businesses and residents still face restrictions, and most school students are still stuck at home with virtual learning. Murray said she would end the state of emergency that Carney declared in March.

Democrats went into Tuesday's election with a 12-9 advantage in the state Senate and a 26-15 margin in the state House. They made a concerted push to flip Senate seats held by potentially vulnerable Republican incumbents and strengthen their Senate majority to the point where they would no longer require GOP support to reach the required supermajorities to pass tax bills and certain other measures. No matter the final results, the legislature is sure to have several new faces. Democratic candidate Sarah McBride won a state Senate race on Tuesday to become the first openly transgender state senator in the country. Several other Democratic progressives were elected Tuesday after defeating Democratic incumbents in the September primary. They include Marie Pinkney and Eric Morrison, the first openly queer woman and openly gay man to be elected to the General Assembly.