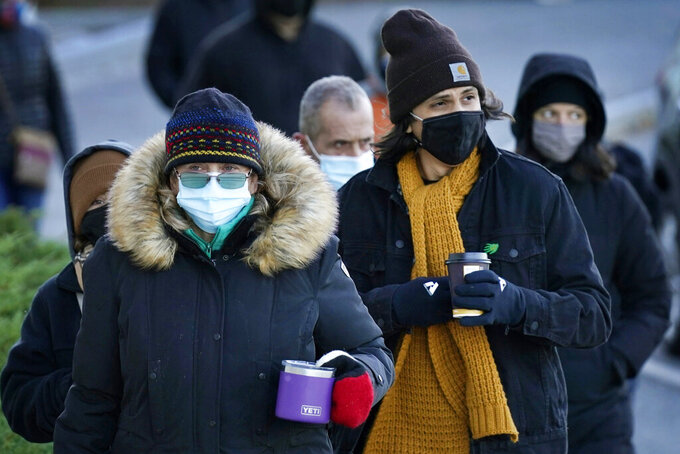 Voters wait in the morning cold for the polls to open to vote in the general election, Tuesday, Nov. 3, 2020, in Portland, Maine. (AP Photo/Robert F. Bukaty)

AUGUSTA, Maine (AP) — The 2020 election in Maine on Tuesday carried a footnote: It marked the first use of ranked choice voting in a presidential contest in the U.S.

Maine voters first approved ranked choice voting in federal races in a statewide referendum in 2016. The Legislature later enacted a law to ensure that it’s used in the presidential race.

Another wrinkle in Maine's presidential voting is that the state divides its four electoral votes with two going to the statewide winner and one apiece being awarded for each congressional district.

It was too early to declare who won the fourth electoral vote. Republican President Donald Trump collected a single electoral vote in 2016 by winning the vote in the rural, northern 2nd Congressional District.

If Trump failed to win a majority of first-round votes in that district, then there would be additional tabulations under ranked voting in which last-place candidates are eliminated and those supporters’ second-place choices are reallocated to the remaining field.

Ranked voting is sometimes called an “instant runoff.” But there’s nothing instant about Maine’s implementation of the voting system.

The voting system is not used for state legislative or governor’s races because of concerns it runs afoul of the Maine Constitution.

The two candidates and their allies together have spent more than $120 million on television advertising alone.

The race was too early to call as vote counting continued early Wednesday.

Collins is battling for a fifth term against a candidate who drew donations from all corners of the country. Democratic support quickly coalesced around Gideon as Collins’ vote for Trump’s Supreme Court nominee Brett Kavanaugh ensured the race would draw national attention and cash.

For all the fundraising, neither candidate had an edge in the polls ahead of Election Day.

That race was also was too early to call.

Golden, who narrowly defeated GOP U.S. Rep. Bruce Poliquin thanks to ranked choice voting in 2018, describes himself as a moderate voice for all Mainers. He has pledged to keep supporting small business and traditional rural industries, and to make access to health care a priority.

Crafts, a Republican, is a businessman and former state lawmaker who is counting on Trump’s popularity in the 2nd Congressional District and endorsement carrying him to victory.

Pingree, who was first elected to the House in 2008, becomes the first person in six decades to be elected to more than six consecutive terms representing the 1st Congressional District.

The 1st District she represents, which includes Portland, is the more heavily Democratic of Maine’s two congressional districts.

More than 500,000 people cast absentee ballots, and the turnout for in-person voters was steady on Tuesday.

Maine Secretary of State Matthew Dunlap said this election cycle — his last as the state’s top election official — was the busiest he’s ever experienced.

There were no reports of major problems, but there were some long lines.

A referendum on a proposed power corridor in western Maine wasn’t on the ballot.

Opponents of Central Maine Power’s $1 billion New England Clean Energy Connect that aims to serve as a conduit for Canadian hydropower obtained enough signatures for a statewide referendum. But the Maine Supreme Judicial Court ruled the referendum violated the Maine Constitution because referendums can be used only to nullify legislative actions, not state agency actions.