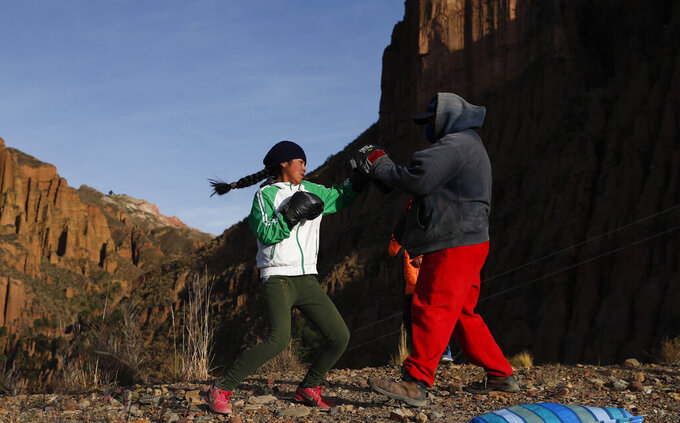 Gracce Kelly Flores, a 12-year-old boxer who goes by the nickname Hands of Stone, does her daily boxing workout as she trains with her father Alberto Flores in Palca, Bolivia, early Thursday, June 10, 2021, amid the COVID-19 pandemic. At age 8, Flores defeated a 10-year-old boy, and with three national boxing medals under her belt, she dreams of reaching the women's boxing world championship. (AP Photo/Juan Karita)

PALCA, Bolivia (AP) — Twelve-year-old Gracce Kelly Flores awakes early most days in her adobe home and sets off running along dusty paths through the thin mountain air above Bolivia's capital.

Her plan to someday become a professional boxer has hit a lull now that the pandemic has halted all competitions. But she's still training, usually three hours a day, what with schoolrooms also closed due to a national surge in COVID-19.

Gracce Kelly adopted the nickname “Hand of Stone because I like to his hard," she said, borrowing a label from Panamanian former champ Roberto Duran. She says she's never lost any of the two-minute bouts to which children are limited.

“I keep training so I don't forget the techniques for my next fight, which I hope will be when (pandemic restrictions) are lifted,” she said.

She's been trained for the past six years or so by her father Alberto Flores. The 54-year-old former amateur boxer raises rabbits alongside the family's blue-painted kitchen-dining room-bedroom-in one. Gracce Kelly helps tend the rabbits after her training and her online homework.

“My dream is to reach the big leagues and turn 18 so I can fight with Jennifer Salinas, my favorite Bolivian boxer," she said, though the former world super bantamweight champ known as “The Bolivian Queen” may be past fighting age by that time.