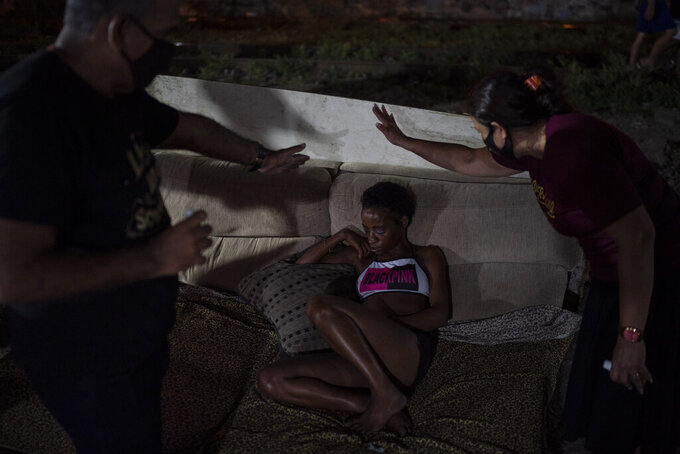 Members of the God's Love Evangelical Church and Rehab Center pray for a woman in an area known as "cracolandia" or crackland, amid the COVID-19 pandemic in Rio de Janeiro, Brazil, Friday, March 19, 2021. The group, led by Rev. Celio Ricardo has a long history of street preaching in the city, regularly venturing into the city’s “cracolandias,” to offer help. (AP Photo/Felipe Dana)

“The church can’t sit idly by or stay silent,” Ricardo said as he joined in singing hymns and prayers with a few dozen parishioners and relatives of COVID-19 victims outside a hospital, raising their voices over the thrum of traffic in a busy neighborhood on the city’s north side.

According to official figures, more than 310,000 people have died in Brazil since the start of the pandemic, the second largest tally behind the United States. With more than 36,000 deaths by itself, Rio de Janeiro state is one of the worst hit in Brazil.

Ricardo has a long history of street preaching in the city. As well as ministering to his God’s Love Evangelical Church, he runs a drug rehabilitation center and regularly ventures into the city’s “cracolandias” — cracklands — to offer drug users a bed in a makeshift shelter. And when he gets donations from local supermarkets, he gives them some food, too.

He decided to hold street-corner meetings for families of COVID-19 victims about a week ago after talking with other pastors about rampant new cases crowding Rio’s hospitals. “God’s voice has the power to change the course of this situation,” Ricardo said. “I felt it in my heart.”

While experts say singing in closed spaces has been linked to some outbreaks of COVID-19 during the pandemic, Ricardo’s group prays in the open air, wears masks and passes around hand sanitizer.

Restaurants, bars and nonessential businesses have been shut in Rio de Janeiro since March 26. Mayor Eduardo Paes announced new restrictions this week in an attempt to stop the rise in hospitalizations.

The pastor said the group has been welcomed by families of patients and he intends to visit more hospitals.

“The Bible says to take strength from weakness,” he said. “We sing and pray because our voice can bring assurance of the love of God to those taking their last breaths.”