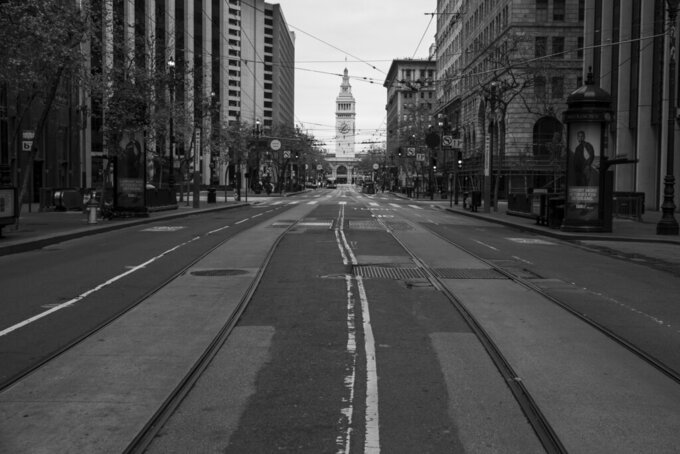 Market Street is mostly empty with the Ferry Building in the background in San Francisco on April 17, 2020. Normally, the months leading into summer bring bustling crowds to the city's famous landmarks, but this year, because of the coronavirus threat they sit empty and quiet. Some parts are like eerie ghost towns or stark scenes from a science fiction movie. (AP Photo/Eric Risberg)

SAN FRANCISCO (AP) — The late San Francisco Chronicle columnist Herb Caen was fond of saying, “One day if I go to heaven … I’ll and look around and say, ‘It ain’t bad, but it ain’t San Francisco.‘”

I’ve thought about these words often as I’ve wandered through the city recently, its vibrancy now silenced by the coronavirus pandemic. Normally, the months leading into summer bring bustling crowds to the city’s famous landmarks. This year, they sit empty and quiet. Some parts are ghost towns, scenes from a science fiction movie. With so few people about, and so many businesses closed, its starkness has called out to me in black and white.

At the corner of Powell and Market streets, pigeons walk across an empty cable car turntable — one usually surrounded by dozens of tourists waiting to board. In Union Square, the Sir Francis Drake Hotel, known for its Beefeater doormen, is boarded up with plywood, along with a number of luxury retail shops nearby. The entryway of John’s Grill, home of the Maltese Falcon, is covered with black plywood. Here and there in the financial district are lone joggers and walkers, a contrast from the sea of people usually filling the streets on their way to and from work.

On the usually packed crooked street, Lombard, only an occasional car passes down its eight hairpin turns. The seafood sellers’ stands at Fisherman’s Wharf sit empty, with no steam pouring out of the crab-boiling pots. Bay cruise boats sit tied up at a pier behind an old neon sign urging tourists to view Alcatraz — which, like so many other iconic San Francisco destinations, has been closed for more than two months.

This would be the time of year when baseball fans would fill the 40,000-seat Oracle Park to watch the San Francisco Giants. The park now sits hauntingly empty as scant people make their way around statues of Juan Marichal, Willie Mays and others surrounding it.

Walking on a recent morning through the popular Ferry Building Marketplace at the foot of Market Street, I saw only two of its few dozen businesses open — an empanada stand and a bread bakery. Hardly any commuters were passing through the building, the result of most downtown businesses being closed and sparse service from the ferries that shuttle people across the bay.

In Chinatown, lanterns swayed above Grant Avenue lined with closed shops behind metal gates and pull-down doors. About the only thing open besides a couple of electronics stores was a poultry butcher shop.

In North Beach, the city’s “Little Italy,” only a few places are open for takeout. Most of the nightclubs, restaurants and cafes are shuttered. The traffic is so light that I can easily stop in the middle of Columbus Street and take in the view of beautiful late light falling on Francis Ford Coppola’s historic 1907 Sentinel Building, a copper-green Flatiron style structure with the Transamerica Pyramid behind it.

Some pluses during this time:

I was able to get around the city in easily less than half the time it normally takes and could park almost directly in front of most of the places I visited. Many places took on a unique beauty without people surrounding them Shadows of cypress trees fell on the Lincoln Park Golf Course with Sutro Tower in the background. The empty ruins of the Sutro Baths sat quietly below the shuttered Cliff House with the sound of waves in the distance. Late light fell down Hyde Street onto the old ships below at the Maritime National Historic Park.

A last stop late one afternoon was atop Nob Hill outside the boarded-up Fairmont Hotel, where a statue of singer Tony Bennett stands with arms outstretched. I thought of the song he made famous about San Francisco and longed for the day when those little cable cars will once again climb halfway to the stars.

Will it happen soon? No one knows exactly when. But San Francisco has proven its resiliency again and again: It survived a major earthquake and conflagration in 1906, the Spanish Flu of 1918, the Great Depression of the 1930s, the 1978 Moscone-Milk assassinations, the 1989 Loma Prieta earthquake and the 2008 economic collapse. We are a city of survivors, reinventing our “new normal” every time a challenge threatens our heavenly city.

Eric Risberg is a San Francisco-based photojournalist for The Associated Press. Follow him on Twitter at http://twitter.com/Eric Risberg