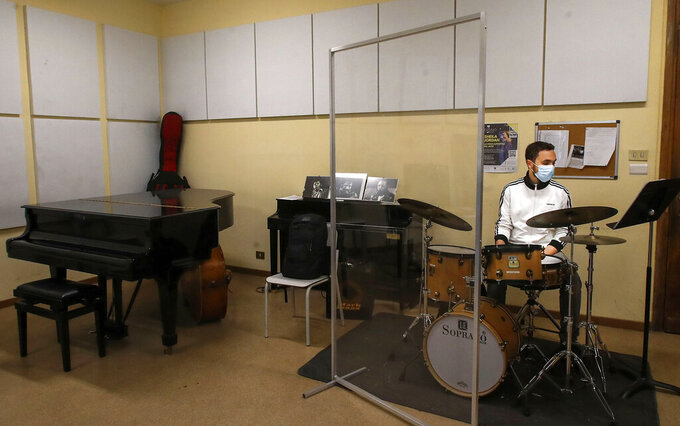 Andrea Lopalo wears a face mask and plays the drums behind a transparent panel to curb the spread of COVID-19 during a lesson at the Giuseppe Verdi Music Conservatory, in Milan, Italy, Thursday, April 29, 2021. Whatever the instrument, flute, violin or drums, students at Italy's oldest and largest music conservatory have been playing behind plexiglass screens during much of the pandemic as the Conservatory found ways to preserve instruction throughout Italy’s many rolling lockdowns. (AP Photo/Antonio Calanni) 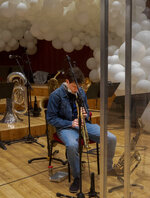 MILAN (AP) — Before the pandemic, students at Italy's oldest and largest music conservatory were always told to move “closer, closer, closer” when they played together.

“Because you need to hear each other,'' said Cristina Frosini, director of the Giuseppe Verdi Music Conservatory in Milan. ”Even at a meter's distance, it is harder to play together.”

In its 213 years, the conservatory has turned out talents including composer Giacomo Puccini, and conductors Claudio Abbado, Riccardo Muti, Riccardo Chailly and Cecilia Bartoli.

The pandemic, which struck Lombardy first in Italy, and Italy first in the West, cast the 1,700 students asunder. For the first months of total lockdown, they could only follow classes online.

When they returned to in-person instrumental instruction a year ago, students had to adjust to both distancing and playing behind plexiglass, whatever the instrument — flute, violin, piano, drums. Frosini said the safety measures worked: There have been only five cases of COVID-19 among students playing together.

“The students were happy because it was the only way to make music and be together. Psychologically, it was very important,’’ Frosini said. But musically, it has been challenging.

The adjustment was more difficult for the orchestras or chamber music groups, when the plexiglass dividers and the distancing rules meant it was difficult to hear the other musicians.

"When playing together, you need to be together, breathe together," Frosini said.

And it wasn’t just the physical distancing that was hard. It was also the absence of audiences.

“We made a recording during the period we were closed to the public, and it was very cold,’’ she said, despite the high level of execution.

“I am a pianist and when you hear the audience in the silence, that they are listening to you, it gives you a charge. It is also important to have the applause of an audience,'' Frosini said.

The conservatory has staged two concerts this spring: one by the Verdi Jazz Orchestra in May and a symphony of Beethoven in June. Both sold out, and they added a second show for the Beethoven performance.

“It was an important message. The public wants to return to listening to live music, and the musicians finally had an audience,’’ Frosini said.

The conservatory, named after Italy's favorite opera composer, features a full-time symphony orchestra, as well as a jazz orchestra; students also study voice and popular-rock. Graduates end up in some of Europe’s top orchestras, with 90% of alumni working full-time in music, be it playing, teaching, in libraries or management.