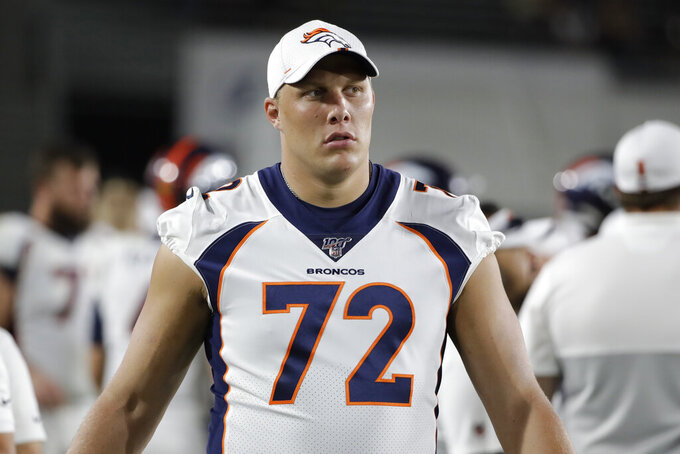 In this Aug. 24, 2019 file photo Denver Broncos offensive tackle Garett Bolles (72) stands near the field during an NFL preseason football game against the Los Angeles Rams in Los Angeles. A person with knowledge of the decision tells The Associated Press that the Broncos have declined the fifth-year contract option on left tackle Garett Bolles, Friday, May 1, 2020. (AP Photo/Rick Scuteri, file)

The Denver Broncos have declined the fifth-year contract option on left tackle Garett Bolles, whose career-long holding habit has alienated fans, a person with knowledge of the decision said Friday.

The person spoke to The Associated Press on condition of anonymity because the Broncos weren't discussing the decision publicly.

Bolles will make $3.5 million in 2020. A fifth-year option for Bolles would have been worth about $11 million, guaranteed against injury.

General manager John Elway didn’t draft an offensive tackle in the NFL draft last week, but he reiterated afterward that the Broncos have thrown open the job of protecting quarterback Drew Lock’s blindside.

Elway said last weekend that Elijah Wilkinson and Bolles will vie for the starting job: “The best player is going to play.”

Wilkinson was expected to challenge Bolles for the starting job last summer before being pressed into duty on the other side when right tackle Ja’Waun James, who had signed a free agent contract that included $32 million in guarantees, missed most of training camp and the season with a knee injury.

The Broncos expect James to be ready whenever the Broncos gather for offseason workouts, something that's uncertain because of the coronavirus.

Although Bolles played better during Lock’s five-game audition to close out the 2019 season, he’s been flagged 46 times in 48 career games.

Bolles was penalized four times for holding in a 16-14 loss to Chicago last September and needed a police escort as he trudged off the field. Afterward, he suggested officials were picking on him.

Suggesting he was the victim in his career-long penalty problem prompted Mark Schlereth, Orlando Franklin and Tyler Polumbus, three former Broncos O-linemen who are now broadcasters, to scold Bolles for either an astonishing lack of self-awareness or a disturbing lack of accountability.

And it led Elway, who drafted Bolles over Wisconsin’s Ryan Ramczyk in the first round of the 2017 draft, to ask the coaching staff whether Bolles even knew what constituted holding.

Bolles cleaned up his play by season's end.