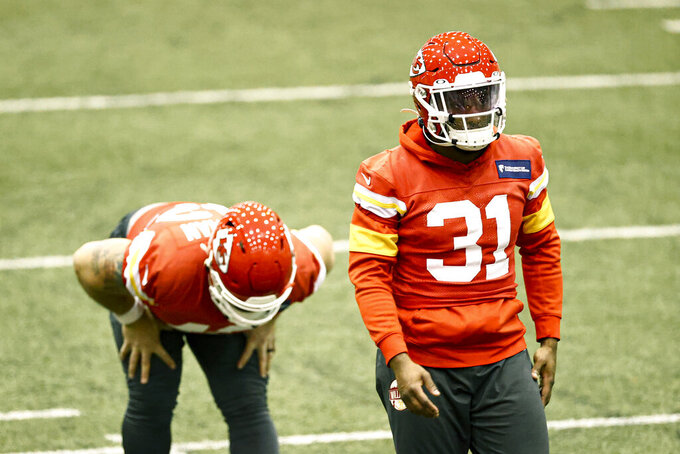 The Kansas City Chiefs are planning to sign defensive lineman Taco Charlton and running back Darrel Williams to one-year deals as the start of free agency approaches Wednesday, a person familiar with the situation told The Associated Press.

The Chiefs also have tendered wide receiver Byron Pringle and offensive lineman Andrew Wylie, according to the person who spoke to the AP on condition of anonymity because deals cannot be completed until later in the day. That's when the Chiefs can also finalize a five-year, $80 million contract with former Patriots offensive lineman Joe Thuney.

Charlton joined the Chiefs last season after the former first-round pick spent two seasons in Dallas and one in Miami. He started only 12 games during that span, but he appeared to be resurrecting his career in Kansas City, where he rotated with former Michigan teammate Frank Clark before breaking his ankle in a game against Carolina in Week 9.

Williams will get $930,000 guaranteed and up to $2.13 million on his contract, according to The Kansas City Star. The 25-year-old joined the Chiefs as an undrafted free agent in 2018 and has become a dependable change-of-pace back.

His value to the Chiefs was evident when they decided to release Damien Williams, their leading rusher during their 2019 championship season. He was expected to return to the team after opting out of last season due to COVID-19.

The move to tender Pringle, who would get $2.18 million next season unless another team offers a better deal, was widely expected after the former undrafted free agent had a strong season. Along with being a special teams standout, he came back from a season-ending injury in his rookie season to catch 13 passes for 160 yards and a touchdown.

Wylie has also been invaluable as a backup offensive lineman often pressed into service due to injuries.

Last season was a prime example: Wylie was pushed into the starting right guard job after Laurent Duvernay-Tardif opted out, starting 14 regular-season games and all three postseason games. He also has played left guard and tackle in a pinch.

The Chiefs view him as insurance as they rebuild an offensive line that was decimated by opt-outs and injuries last season and ultimately was exposed by Tampa Bay in the Super Bowl. They began by releasing injured veteran tackles Eric Fisher and Mitchell Schwartz to create salary cap space, then struck a deal with Thuney to plug the hole at one guard spot.

Duvernay-Tardif is expected to return next season, filling the other guard spot. But that still leaves the Chiefs in search of a center and two tackles. One of those jobs could belong to Lucas Niang, a third-round pick in last year's draft who opted out of playing his rookie season because of the pandemic.