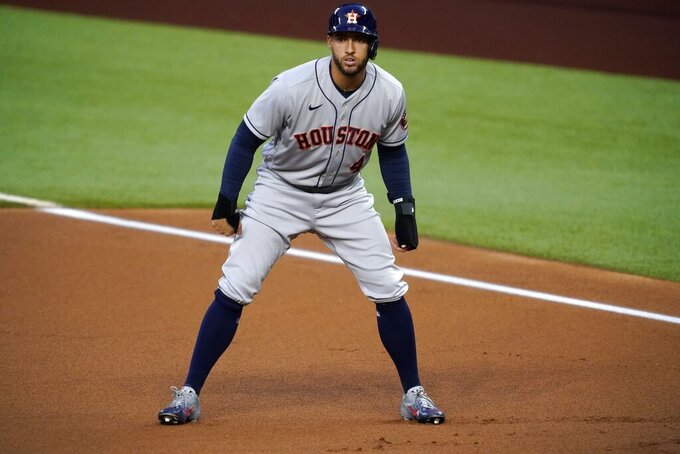 FILE - In this Sept. 25, 2020, file photo, Houston Astros' George Springer takes a lead off first during the first inning of the team's baseball game against the Texas Rangers in Arlington, Texas. Springer became the most prominent among baseball’s free agents to reach an agreement, a $150 million, six-year contract with the Toronto Blue Jays, a person familiar with the negotiations told The Associated Press. The person spoke on condition of anonymity Tuesday night, Jan. 19, 20201, because the deal was subject to a successful physical. (AP Photo/Tony Gutierrez, File)

TORONTO (AP) — All-Star outfielder George Springer became the most prominent among baseball’s free agents to reach an agreement this offseason, a $150 million, six-year contract with the Toronto Blue Jays, a person familiar with the negotiations told The Associated Press.

The person spoke on condition of anonymity Tuesday night because the deal was subject to a successful physical.

It would be the largest contract in team history.

Springer, who turned 31 in September, is a three-time All-Star who has spent his entire seven-season career with Houston and was the World Series MVP when the Astros beat the Los Angeles Dodgers in seven games for their first title in 2017. The championship was later tainted when it was discovered Houston illicitly stole signs that season.

Under new owner Steve Cohen, the New York Mets also were said to be interested in Springer.

The Blue Jays have an emerging young core and are able to add at least one major contract before their younger players like Bo Bichette and Vladimir Guerrero Jr. earn a lot more. Toronto has been linked to most of the top free agents this winter, but now has the one it wanted most.

The upstart Blue Jays went 32-28 during the pandemic-altered 2020 season, finishing third in the AL East behind Tampa Bay and the New York Yankees and qualifying for the expanded postseason. They were swept in two games by the AL champion Rays in a first-round series.

Toronto had success despite moving its home games to Buffalo, New York, after the Canadian government didn't allow the team to play in Canada because of the COVID-19 risk of frequent travel throughout the U.S. It's not clear where the Blue Jays will begin the 2021 season.

The Blue Jays have had to overpay free agents to play in Canada before, but the Springer contract will be just the second $100 million-plus deal in team history. Vernon Wells and the Blue Jays agreed to a $126 million, seven-year contract in 2006. At the time it was sixth-largest deal in baseball history.

Because Springer turned down an $18.9 million qualifying offer, Houston will receive an extra pick in next July’s amateur draft after the fourth round and Toronto will lose its second-highest draft pick and also forfeit $500,000 of international signing bonus pool space for the 2022-23 signing period.