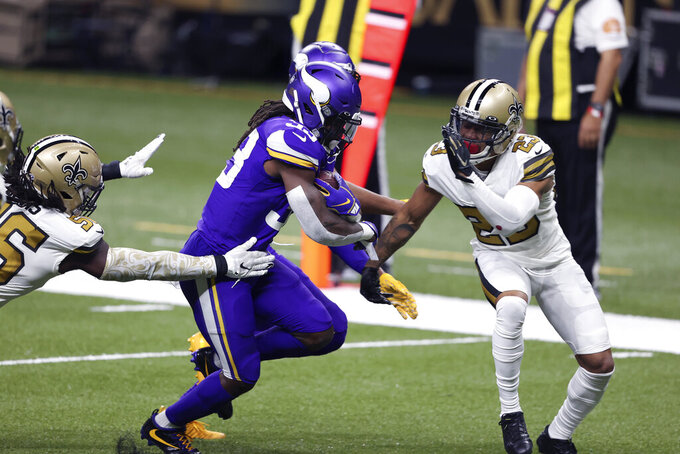 MINNEAPOLIS (AP) — Running back Dalvin Cook is not practicing with the Minnesota Vikings this week, due to the death of his father.

Two people with knowledge of the situation, speaking Wednesday on condition of anonymity because the team did not announce a reason for his absence, confirmed that Cook went home to Miami to be with his family after the unexpected passing. Cook has a younger brother, James Cook, who is a running back for Georgia.

The Vikings play Sunday at Detroit, with both teams eliminated from contention for the playoffs, so the best season of Cook's four-year career is all but over. He was picked for a second straight Pro Bowl, with 1,557 rushing yards, 361 receiving yards and 17 total touchdowns in 14 games.

Even if there were postseason implications, Cook would not have enough time to clear COVID-19 protocols in order to be allowed to play. The NFL has a six-day testing window for newly arriving players, a waiting period that applies to any interruption to the daily testing process.

Vikings coach Mike Zimmer did not mention Cook’s absence during his video conference with reporters. Quarterback Kirk Cousins and wide receiver Justin Jefferson expressed condolences to Cook, who was selected by vote of the Minnesota chapter of the Pro Football Writers Association as the 2020 recipient of the Korey Stringer Good Guy Award for media cooperation and professionalism.

Cook’s absence will clinch a second consecutive rushing title for Tennessee’s Derrick Henry, who has a 220-yard lead on Cook. The next closest players on the league leaderboard are more than 700 yards behind Henry, entering the final week. Henry will be the first repeat winner since LaDainian Tomlinson in 2006 and 2007.

Cook has a slim lead on Henry atop the NFL with 1,918 total yards. He'll finish second in team history on the single-season list, behind Adrian Peterson's 2,314 total yards in 2012 when he won the league MVP award. Peterson, with 18 scores in 2009, is the only Vikings player who has ever tallied more rushing touchdowns in one season.

The Vikings placed tight end Kyle Rudolph (foot) on injured reserve, ending the 10-year veteran’s season. He will miss his fourth straight game. Linebacker Eric Kendricks (calf) has missed four consecutive games and would be unlikely to risk further injury Sunday. Beside them and Cook, there was no indication of other notable absences against the Lions. Asked if he was planning to sit any starters Sunday, Zimmer said no.