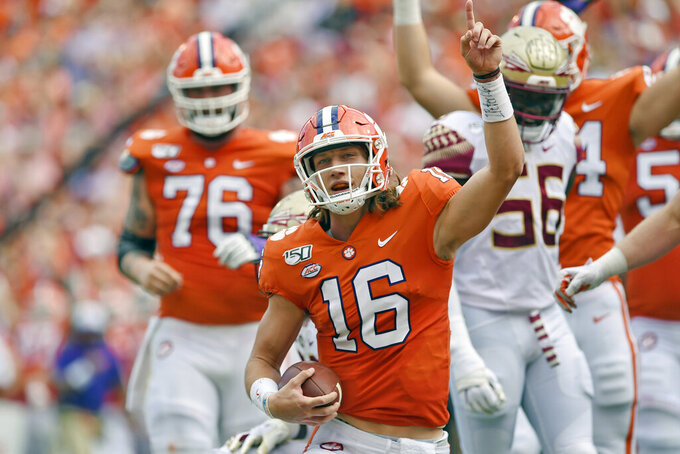 FILE - In this Oct. 12, 2019, filer photo, Clemson quarterback Trevor Lawrence (16) reacts after scoring a touchdown during the first half of an NCAA college football game against Florida State, in Clemson, S.C. Clemson is preseason No. 1 in The Associated Press Top 25, Monday, Aug. 24, 2020.(AP Photo/Richard Shiro, File)

Clemson is the preseason No. 1 in The Associated Press Top 25, a poll featuring nine Big Ten and Pac-12 teams that gives a glimpse at what has already been taken by the pandemic from an uncertain college football season.

Ohio State (1,504 points) was a close No. 2 behind Trevor Lawrence and Clemson (1,520), which starts atop the rankings for the second straight season. The Tigers beat the Buckeyes in a thrilling College Football Playoff semifinal last season.

Alabama is No. 3, Southeastern Conference rival Georgia is No. 4 and defending Big 12 champion Oklahoma is No. 5. Defending national champion LSU is No. 6.

The 85th edition of the AP rankings will be like none before.

The Big Ten, where Ohio State and No. 7 Penn State play, and the Pac-12, home to No. 9 Oregon, canceled their fall sports seasosn because of concerns about the coronavirus. The Mid-American and Mountain West conferences have also said they will try to play spring football.

The SEC, Atlantic Coast Conference, Big 12, American Athletic, Conference USA and Sun Belt are forging ahead with fall sports, with changes: The three remaining Power Five conferences, the SEC, ACC, and Big 12, have eliminated all or most nonconference games and delayed the start of their seasons from one to three weeks.

Erased from the college football schedule this year were a host of tantalizing nonconference matchups: Ohio State at No. 9 Oregon; No. 10 Notre Dame vs. No. 12 Wisconsin at Lambeau field in Green Bay; No. 14 Texas at LSU; No. 17 Southern California vs Alabama in Arlington, Texas; No. 11 Auburn vs. No. 18 North Carolina in Atlanta.

For now, big conference games such as Ohio State-Michigan and Washington-Washington State could still be made up in the spring.

All Division I teams were eligible for the preseason AP Top 25, but after the season starts, only teams scheduled to play in the fall are eligible. That leaves 76 FBS teams from which to choose.

If a spring season is played, the AP will consider doing rankings for those teams, too.

The ACC's Tigers, who also welcome back star running back Travis Etienne, standout offensive tackle Jackson Carman and sturdy defensive tackle Tyler Davis, will try to become the 12th preseason No. 1 to finish No. 1. Only two teams have gone wire-to-wire as No. 1: Florida State in 1999 and USC in 2004.

LSU is the first defending national champion to start the following season outisde the top five since Auburn in 2011 (post-Cam Newton, the Tigers were ranked No. 23 in the preseason poll). LSU lost a Heisman Trophy-winning quarterback and No. 1 overall NFL draft pick, too, in Joe Burrow.

Myles Brennan is the new QB for the Tigers, who had 14 players selected in the last draft, including five in the first round. There is plenty of talent coming back with All-America receiver Ja'Marr Chase, cornerback Derek Stingley Jr., and nose tackle Tyler Shelvin.

The Tigers will try to become the first back-to-back national champions since Alabama in 2011 and '12.

— No. 18 North Carolina is ranked in the preseason for the first time since 2016.

— No. 19 Cincinnati makes its first appearance in the AP preseason poll. The Bearcats have finished ranked each of the last two seasons.

— No. 20 Minnesota is making its first preseason poll appearance since 2004. The Gophers were one of the surprise teams of last season, starting unranked and ending up No. 10, their best finish since 1962.

Ohio State extended the longest active streak of preseason Top 25 appearances with 32, followed by Oklahoma with 21, LSU with 20, Georgia with 19, Alabama with 13 and Clemson with nine.

The Buckeyes' 21 first-place votes in the preseason Top 25 were the most by a non-No. 1 team since Ohio State in 2008, when it also had 21 and was one behind top-ranked Georgia. Florida, which was No. 5 in the 2008 preseason poll with five first-place votes, won the national title that year.

The Southeastern Conference, as usual, leads the way with seven teams in the Top 25, including six of the first 13 teams.