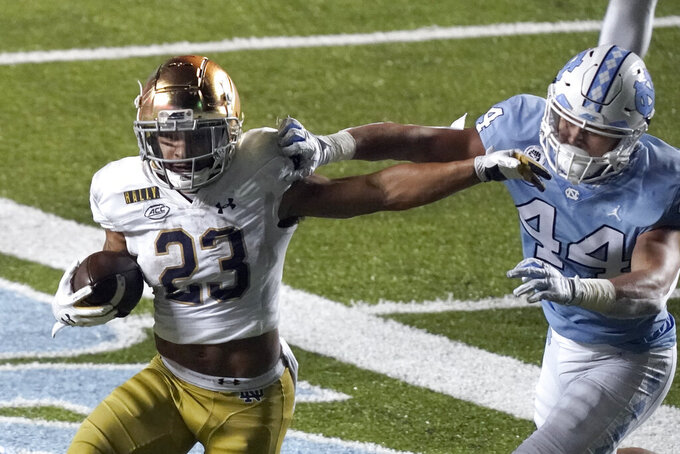 For the fourth straight week, the top eight teams in The Associated Press college football poll were stuck in place, and a glance at the upcoming schedule suggests it could be a couple more weeks before this gridlock lets up.

The elite eight runs down like this: Alabama at No. 1 followed by Notre Dame, Ohio State, Clemson and Texas A&M in the top five. Florida is sixth, Cincinnati is seventh and BYU eighth.

And that's the way its been since Nov. 8, the day after Notre Dame beat Clemson.

Among the top six teams, only one plays an opponent with a winning record next week. Texas A&M is at Auburn (5-3). No. 7 Cincinnati and No. 8 BYU are scheduled to be off, and the speculation about those two unbeatens trying play each other on short notice seemed to be doused when the Bearcats had their American Athletic Conference game against Temple called off because of COVID-19 issues with both teams.

No. 3 Ohio State is also in danger of getting another week off next Saturday because of a virus outbreak — which would create a whole other set of problems for the Buckeyes.

So barring a big upset by LSU, Syracuse, Virginia Tech or Tennessee, or a more modest upset by Auburn, the AP poll could be heading toward a fifth straight week of stagnation.

Reality check takes no issue for the voters standing pat. Here is where the ranked teams stand heading into an unusual December stretch run in college football, where the pandemic is the toughest opponent.

Next: at LSU, Saturday.

Next: vs. Syracuse, Saturday.

Reality check: The Irish have faced four of the top-10 rushers in the Atlantic Coast Conference. Louisville's Javian Hawkins, Clemson's Travis Etienne and North Carolina's Javonte Williams and Michael Carter have run 52 times for 164 yards (31.5 per carry) against Notre Dame.

Next: at Michigan State, Saturday.

Reality check: If the Buckeyes lose one more game from their schedule, and become ineligible for the Big Ten title game, it's going to make a mess of the College Football Playoff race.

Next: at Virginia Tech, Saturday.

Reality check: Remember when the Tigers were looking for a downfield threat? Senior Cornell Powell has become that guy, with 23 catches for 442 yards in the last three games.

Next: at Auburn, Saturday.

Reality check: At a time when defense does not win championships, the Aggies are going to try to make the playoff with a tough defense — that was torn up by both Alabama and Florida earlier this season.

Next: at Tennessee, Saturday.

Reality check: Two weeks on hold for the Bearcats is poorly timed. Being out of sight and maybe out of mind is not great for a playoff contender.

Reality check: The Bearcats might not be ready to play next week, but the Cougars definitely want a game. Anyone?

Next: at Duke, Saturday.

Reality check: The Hurricanes will return to action after a two-week COVID-19 pause against Duke instead of Wake Forest, which should be an easy way for Miami to get back into the swing of things before playing North Carolina on Dec. 12.

Reality check: The running game was enough for the Hoosiers to survive Maryland after Michael Penix Jr. went out with a leg injury. That probably won't work against the Badgers.

Next: vs. Vanderbilt, Saturday.

Reality check: The big question for the Bulldogs right now has nothing to do with this season. What's the chances QB J.T. Daniels declares for the NFL draft after a brief layover in Athens. Seems unlikely, but who knows?

Next: vs. West Virginia, Saturday.

Reality check: The Cyclones were a combined 7-84-2 against Oklahoma and Texas before Matt Campbell became Iowa State's coach in 2016. Under Campbell, the 'Clones are 4-6 against those Big 12 blue bloods.

Next: vs. Baylor, Saturday.

Reality check: The Sooners had their first COVID-19 postponement last week and now we wait to see if it turns into two.

Reality check: Coastal scheduled this game with Liberty in mid-August after the Power Five teams bailed on most of the Group Five. Who knew it would be one of the biggest games of this week?

Next: vs. Rice, Saturday.

Reality check: The Thundering Herd has not played since Nov. 14, and Rice has been a team that has struggled to get on the field.

Next: at Minnesota, Saturday.

Reality check: Wildcats might have to wait to bounce back from their first loss as the Gophers work their way through a COVID-19 outbreak that canceled their last game.

Next: vs. Washington State, Sunday.

Reality check: Still more COVID-19 news. USC and Washington State had their games canceled last week and instead of playing Friday night they'll now meet on Sunday at the Coliseum.

Reality check: QB Graham Mertz has completed 55.5 percent of his passes since going 20 for 21 against Illinois in the opener.

Next: at TCU, Saturday.

Reality check: Cowboys' defense was lauded early in the season but it has crumbled the past couple weeks, allowing more than 7 yards per play against Oklahoma and Texas Tech.

Next: at Appalachian State, Friday.

Reality check: Ragin' Cajuns get the defending Sun Belt champions and then have a week off before the rematch with Coastal Carolina in the conference title game. ULL has gotten overshadowed by Coastal's feel-good story, but could still turn out to be the Sun kings.

Next: at California, Saturday.

Reality check: Voters underrated all the attrition and opt outs on the Ducks' defense, which ranks 10th in the Pac-12 at 6.37 yards per play allowed.

Next: at Navy, Saturday.

Reality check: The Golden Hurricane got an unexpected week off after Houston had to postpone their game. Tulsa has played in consecutive weeks twice this season.

Next: vs. Stanford, Saturday.

Reality check: If you don't know sophomore outside linebacker Zion Tupuola-Fetui, you need to catch up. He has seven sacks in three games after wrecking Utah.

Next: at Illinois, Saturday.

Next: at Coastal Carolina, Saturday.