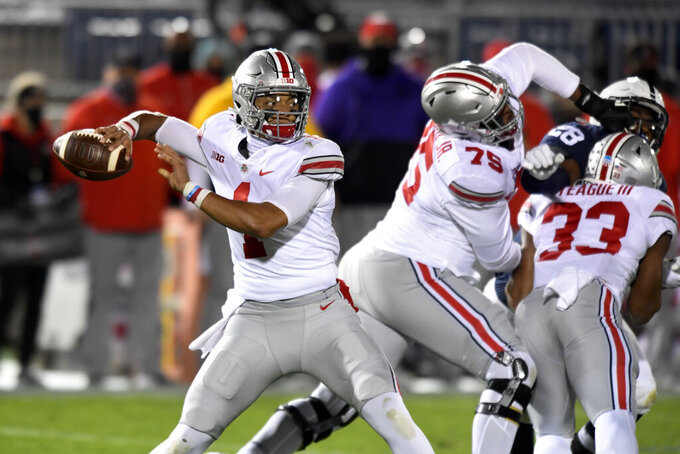 The gap between the truly elite programs and the rest of college football was never more apparent Saturday as No. 1 Clemson gave a glimpse of life after Trevor Lawrence in Death Valley and No. 3 Ohio State toyed with what was supposed to be the toughest opponent on its schedule.

In a season wracked with uncertainty and unpredictability brought on by trying to play through the coronavirus pandemic, Clemson simply replaced the best quarterback prospect that college football has had in years with its latest phenom and future NFL first-round draft pick.

DJ Uiagalelei took a little while to get going, but a scary half for Clemson’s defense against Boston College forced Dabo Swinney to unleash the five-star freshman. He delivered a monster game: 30 for 41 for 342 yards, two touchdowns, no picks and a 30-yard touchdown run.

Clemson heads to No. 4 Notre Dame next week still unbeaten.

Uiagalelei will get the start in South Bend, too. Swinney ruled out Lawrence, who tested positive for COVID-19 earlier this week. The coach said Lawrence was feeling good, but he put to rest any speculation that the golden boy could go from isolation to playing in the biggest game of Clemson’s season — which appeared to be the best-case scenario for the Tigers.

The Fighting Irish figure to pose a tougher test for Uiagalelei. Maybe.

Put it this way: The Irish will go into the game with a three-year starter at quarterback in Ian Book and it would be hard to argue Clemson doesn’t still have the advantage at that position. Uiagalelei would probably be starting this season at 75% of Power Five schools. And that’s a conservative estimate.

This has been major college football during most of the College Football Playoff era. Clemson and Alabama are in their own tier. Ohio State is there now, too.

The Buckeyes and Justin Fields were never threatened at No. 18 Penn State. Fields, the presumptive No. 2 quarterback in the next draft behind Lawrence, passed for 318 yards and four touchdowns.

"He is talented and it's not just Justin. It’s all the pieces around him as well," said Nittany Lions coach James Franklin, who at one time had a verbal commitment from Fields to attend Penn State out of high school.

That didn't pan out and it has left Penn State in college football's best of the rest tier with Notre Dame and others.

LSU crashed college football's exclusive party last year by getting maybe the greatest individual performance by a college quarterback ever. Thanks, Joe Burrow.

It is has become crystal clear that was a one-off.

Georgia has pushed to be in the same class as Clemson and Alabama. The recruiting rankings say yes, but the results on the field say the Bulldogs are no closer to joining the club since Tua Tagovailoa ripped a national title away from them on second-and-26 three seasons ago.

Clemson currently has two on its roster.

“I’ve been preparing for this ever since I got to Clemson,” Uiagalelei aid.

Fields went to Georgia out of high school but transferred to Ohio State, and the gap between the Buckeyes and and Nittany Lions has been growing ever since. Meanwhile, Georgia is now starting a former walk-on at quarterback.

There will be a lot of games played between now and Jan. 1 when the College Football Playoff semifinals are scheduled. Some will be touted as having playoff implications.

The reality is you don’t need more than one hand to count the national title contenders. In fact, you just need three. Clemson, Alabama and Ohio State are in a class by themselves.

In this fragile season, maybe just skip ahead to playoff and have the Tigers, Tide and Buckeyes play a round-robin for the national championship.

Everybody else is just playing for fourth place.

Week 1 of the Big Ten season was a liar.

Michigan’s exciting new offense, the one that tore up Minnesota? Turns out Minnesota’s defense is bad enough to make Taulia Tagovailoa look like his older brother.

Michigan State’s opening-day disaster against Rutgers, portending a long first season for new coach Mel Tucker? Turns out if the Spartans don’t give the ball away seven times, they might be pretty decent.

The Wolverines’ loss at an almost empty Big House to their in-state rivals could be the low point of Jim Harbaugh’s tenure at Michigan. Losing to Ohio State is crushing. But being on the wrong end against the Spartans triggers an existential crisis among Michigan fans.

What is Michigan football if it can beat Michigan State only half the time, which is what Harbaugh has done in six seasons?

AROUND THE COUNTRY: In consecutive weeks, No. 7 Cincinnati held high-scoring American Athletic Conference rivals SMU and Memphis to a total of 23 points in blowout victories. Any playoff conversation that includes a Big 12 team is probably going to have to include the Bearcats because the AAC and Big 12 are looking fairly comparable these days. ... This comes after Texas knocked off No. 6 Oklahoma State in overtime and No. 16 Kansas State was trounced at West Virginia. The Big 12 has no undefeated teams in conference play and it wouldn’t be the slightest bit surprising at this point if the league champ finishes with three losses. ... Cowboys quarterback Spencer Sanders is one of the most exciting players in the country, but too often not in a good way for Oklahoma State. ... How quickly can a coach burn the goodwill and credibility that comes with winning a national title? Well, Gene Chizik set the record, getting fired two seasons after winning it all with Auburn and Cam Newton in 2010. Not suggesting LSU’s Ed Orgeron is heading toward being Chizik’d next season. Auburn went winless in the SEC in 2012. LSU appears to have a lot of high-end underclassmen to build on going forward. But Coach O is going to need to hit the re-set on his defensive staff going into 2021 and have a pretty significant rebound because just breaking even might be tough this season after getting clubbed by Auburn. ... Next weekend’s schedule looks like not only the largest of this strange season, but maybe the best — if it remains intact. First off, the Mid-American Conference opens with a full slate Wednesday night. On Friday night, No. 11 BYU is at No. 25 Boise State. No. 10 Florida faces No. 5 Georgia in a subdued but important World’s Largest Outdoor Cocktail Party. Oklahoma State at Kansas State is still a pivotal Big 12 game. Michigan goes to No. 17 Indiana in a game that could push Wolverines fans’ angst to new heights.