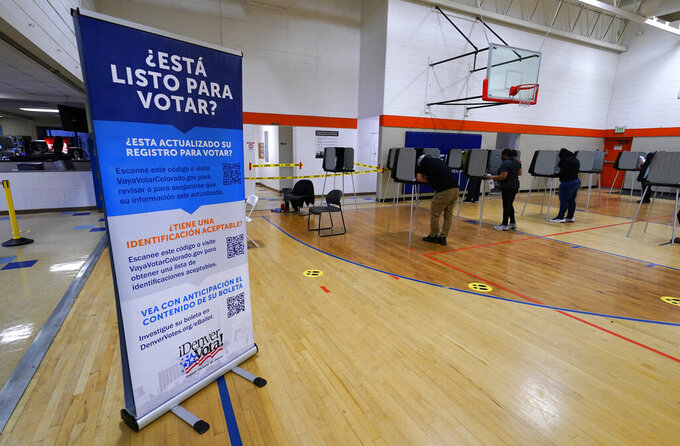 A sign in Spanish stands near voters as they cast their ballots at stations inside the La Familia Recreation Center in the Baker neighborhood Tuesday, Nov. 3, 2020, south of downtown Denver. (AP Photo/David Zalubowski)

Most voters casting ballots in Colorado’s presidential and U.S. Senate election said the country is on the wrong track, according to an expansive AP survey of the American electorate.

As voters on Tuesday finished deciding between President Donald Trump and Democratic rival Joe Biden in a year upended by a global pandemic and economic downturn, AP VoteCast found that just one-third of Colorado voters said the U.S. is on the right track while two-thirds of voters said it is headed in the wrong direction.

Here’s a snapshot of who voted and what matters to them, based on preliminary results from AP VoteCast, a nationwide survey of about 127,000 voters and nonvoters — 2,995 voters and 806 nonvoters in Colorado — conducted for The Associated Press by NORC at the University of Chicago.

Biden won Colorado and its nine electoral votes as both white voters and Latino voters were more likely to support the Democrat.

Colorado was not a top-tier battleground in the presidential race. Trump lost the state to Democrat Hillary Clinton in 2016 and since then Colorado appeared to move further to the left.

Trump came to the state just once in 2020 for a rally in Colorado Springs in February. Biden, who has run primarily a virtual campaign nationwide since the beginning of the pandemic, didn’t hold any public campaign rallies in the state.

Biden had an advantage over Trump among college-educated voters while Biden and Trump were roughly even among voters without a college degree.

Both voters in cities and suburban voters were more likely to favor Biden, but Trump had an apparent advantage among voters in small towns and rural areas.

Hickenlooper had an advantage over Gardner among voters under 45. The Democrat also had an edge among older voters.

Both white voters and Latino voters were more likely to favor Hickenlooper over Gardner.

Voters in small towns and rural areas were more likely to back Gardner over Hickenlooper while Hickenlooper led among both voters in cities and suburban voters.

Biden repeatedly criticized Trump’s handling of the coronavirus while Trump often responded that his opponent wanted to shut down the economy again to control the pandemic.

Overall, almost 2 in 5 voters said the virus in the U.S. is completely or mostly under control, and roughly 3 in 5 said it’s somewhat under control. But half of Colorado's voters think the coronavirus is not at all under control in this country.

“A much higher percentage of our population’s getting sicker than other countries. And to me that definitely goes back to a leadership problem starting at the top,” said Bryan McCord, 35, a Biden voter who works for an electrical contracting company in Denver.

More than 2,000 have died from the virus across Colorado, and a rising number of cases this fall led state health officials to place new limits on personal gatherings of people from different households in nearly half of the state’s counties.

Voters were more negative than positive in their assessments of the nation’s economy. Overall, 2 in 5 described economic conditions in the U.S. as excellent or good, and 3 in 5 called them not so good or poor.

Christopher Nelson, 44, a retired veteran who lives near Glenwood Springs and voted for Trump, said the president has succeeded at bringing back industry jobs and lessening the financial support given to other countries.

“America has deep pockets, I understand that, but we can’t continuously fork out and be the one always leading and be the one with more bankroll,” he said.

The coronavirus pandemic was top of mind for many voters in Colorado. Close to 2 in 5 said it is the most important issue facing the country today. About a quarter of the voters cited the economy while roughly 1 in 10 said it was climate change and almost the same number said health care.

Logan Stickney, 37, an occupational therapist in Centennial, said it wasn’t just one or two issues that pushed him to Biden.

“Watching everything that’s happened in the last four years from kids in cages at the border, to the U.S. alienating our allies abroad, to the mismanagement of the pandemic, to the President constantly going on Twitter and disparaging others and acting with behavior that I wouldn’t accept from my 2-year-old really just solidified my belief that we need to go in a different direction,” he said.

In Colorado, 3 in 5 of nonvoters were younger than 45 and two-thirds did not have a college degree.

AP VoteCast is a survey of the American electorate conducted by NORC at the University of Chicago for Fox News, NPR, PBS NewsHour, Univision News, USA Today Network, The Wall Street Journal and The Associated Press. The survey of 2,995 voters in Colorado was conducted for eight days, concluding as polls closed. Interviews were conducted in English and Spanish. The survey combines a random sample of registered voters drawn from the state voter file and self-identified registered voters selected from nonprobability online panels. The margin of sampling error for voters is estimated to be plus or minus 2.3 percentage points. Find more details about AP VoteCast’s methodology at https://ap.org/votecast.