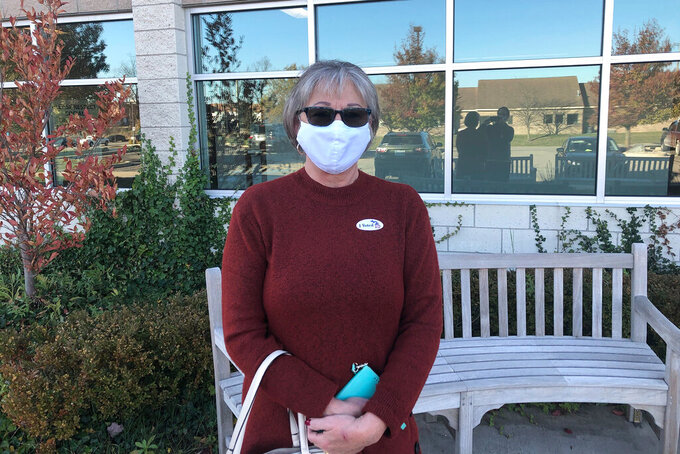 Cynthia Baird speaks about voting Tuesday, Nov. 3, 2020 in Howell, Mich. Baird said she voted for Trump. She said she thought the most important issue facing the country was "to be safe, and make sure everybody is equally treated, and just care for people." (AP Photo/Noah Trister

Voters in Michigan gave Democrat Joe Biden the state’s coveted 16 electoral votes as they held negative views about the country’s direction and its economy, according to an expansive AP survey of the American electorate.

As voters finished deciding between President Donald Trump and Biden in a year turned upside down by a global pandemic and economic downturn, AP VoteCast found that 2 in 5 of Michigan voters said the U.S. is on the right track and 3 in 5 said it is headed in the wrong direction.

The AP on Wednesday called Michigan for the former vice president.

Here’s a snapshot of who voted and what matters to them, based on preliminary results from AP VoteCast, a nationwide survey of about 127,000 voters and nonvoters — including 3,571 voters and 955 nonvoters in Michigan — conducted for The Associated Press by NORC at the University of Chicago.

Biden wrested Michigan away from Trump behind the support of college-educated and suburban voters.

Trump, who fours years ago became the first Republican to carry the state in 28 years, appeared to lead among voters without a college degree, but Biden had an advantage among who went to college.

Both voters in cities and suburban voters were more likely to support Biden over Trump while Trump had an advantage over Biden among voters in small towns and rural areas.

The former vice president's strategy was built around winning big in the state’s suburbs, especially among women. He also sought to make inroads with older voters who disapproved of Trump’s handling of the coronavirus pandemic.

Trump was counting on a huge turnout in rural and small-town places where he also dominated four years ago.

Biden had an advantage over Trump among voters under 45 while older voters modestly preferred Trump.

“I just didn’t like how things are going in the last four years and I hope to change things in the next four years,” said Latic Chambers, 32, the owner of a disinfectant business in Detroit who voted for Biden.

Biden’s campaign worked to solidify its support among Black voters by reaching out to pastors, women and political activists in the Black community.

In the state’s first competitive Senate contest in 20 years, Democratic Sen. Gary Peters of Michigan, a first-term incumbent, was up against Republican challenger John James, a business executive and combat veteran.

Peters had an apparent advantage over James among voters under 45 while older voters appeared to prefer James.

The Democratic incumbent appeared to lead James among college-educated voters while James had an edge over Peters among voters without a college degree.

Both parties poured millions into the race. James, who is Black, sought to appeal to Black voters disillusioned with Democrats. Former President Barack Obama appeared in ad for Peters, crediting the Democrat for working to save auto industry and protect the Great Lakes.

Biden seized on Trump’s handling of the coronavirus, calling him “reckless” during stops in Michigan, one of the hardest hit states during early stages of the pandemic. More than 7,500 have died from the virus across the state.

Overall, about 2 in 10 voters said the virus in the U.S. is completely or mostly under control, and 3 in 10 said it’s somewhat under control. Roughly half think the coronavirus is not at all under control in this country.

“We're not doing as well as we could have been, with all the resources this country has. So yeah, that definitely impacted my vote,” said Georgia Richardson-Smaller of Ann Arbor, a 19-year-old student who voted for Biden.

Trump warned that Biden would keep Michigan “locked up” during the coronavirus pandemic. Early in the pandemic, he cheered on protesters who opposed Democratic Gov. Gretchen Whitmer’s virus restrictions, tweeting “Liberate Michigan!”

“Everybody should continue to wear a mask and play it safe, but I think that we should also move forward with the world,” said Cynthia Baird, 63, of Howell, who voted for Trump.

Michigan voters were slightly more negative than positive in their assessments of the nation’s economy. Overall, almost half described economic conditions in the U.S. as excellent or good, while just a little over half them not so good or poor.

The coronavirus pandemic was the top issue for 2 in 5 voters in Michigan. About a quarter cited the economy while 1 in 10 said it was health care.

Trump has handled all of the big issues well, said Adam Baker, 59, of West Bloomfield, who works in real estate.

“He exceeded every expectation,” said Baker, who voted for the president. “The economy. National security. The rule of law. Our allies, his stance on Israel and a return to normalcy.”

Among registered voters who chose not to cast a ballot in Michigan, a quarter said that was because they don’t like the candidates, 2 in 5 said they don’t like politics generally and 1 in 10 said their vote doesn’t matter.

In Michigan, two-thirds of nonvoters were younger than 45 and large share did not have a college degree.

AP VoteCast is a survey of the American electorate conducted by NORC at the University of Chicago for Fox News, NPR, PBS NewsHour, Univision News, USA Today Network, The Wall Street Journal and The Associated Press. The survey of 3,571 voters in Michigan was conducted for eight days, concluding as polls closed. Interviews were conducted in English and Spanish. The survey combines a random sample of registered voters drawn from the state voter file and self-identified registered voters selected from nonprobability online panels. The margin of sampling error for voters is estimated to be plus or minus 2 percentage points. Find more details about AP VoteCast’s methodology at https://ap.org/votecast.

For AP’s complete coverage of the U.S. presidential elections: https://apnews.com/hub/election-20200