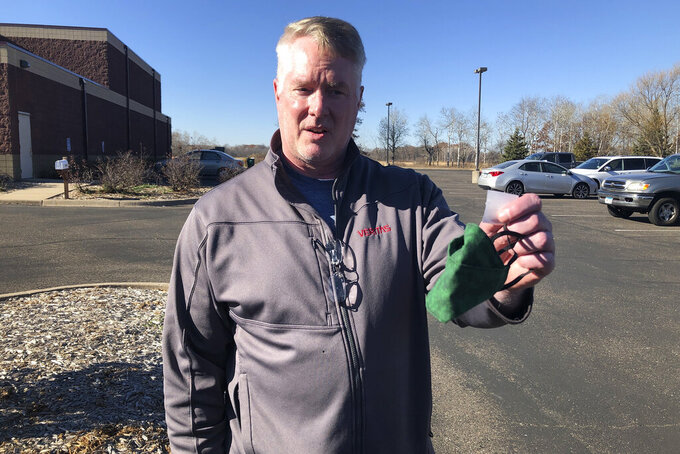 Marty Boeckman, of the Minneapolis suburb of Blaine, Minnesota, discussed his vote for Democrat Joe Biden outside his polling station at Bridgewood Community Church on Tuesday, Nov, 3, 2020. Boeckman described himself as "very conservative" but said the issue of integrity drove his decision to vote for Biden over President Donald Trump.(AP Photo/Steve Karnowski)

Voters in Minnesota gave Democratic presidential candidate Joe Biden its 10 electoral votes while holding negative views about the country’s direction, according to an expansive AP survey of the American electorate.

The race between President Donald Trump and Biden concluded Tuesday in a deeply divided nation struggling with a once-in-a-century pandemic and a severe economic downturn. AP VoteCast found that nearly 4 in 10 Minnesota voters said the U.S. is on the right track and 6 in 10 said it is headed in the wrong direction.

Biden's victory in Minnesota continues of a streak of Democratic presidential victories going back nearly a half century.

Biden had an advantage over Trump among college-educated voters while Trump appeared to lead among voters without a college degree.

“I’m very much a conservative but Trump is just not what I want from a leader," said Marty Boeckman, 57, a software engineer from Blaine who voted for Biden. “He doesn’t have leadership,”

The coronavirus pandemic has killed more than 230,000 Americans, among them more than 2,400 Minnesotans as cases surge in the state.

Overall, nearly 2 in 10 voters said the virus in the U.S. is completely or mostly under control, and 3 in 10 said it’s somewhat under control. Half of voters think the coronavirus is not at all under control in this country.

The coronavirus pandemic was top of mind for many Minnesota voters. Four in 10 it is the most important issue facing the country today.

College-educated voters were more likely to back Smith over Lewis while Lewis and Smith were neck and neck among voters without a college degree.

Lewis was preferred among voters in small towns and rural areas but Smith led among both voters in cities and suburban voters.